Front runner to be the new head of UNICEF? 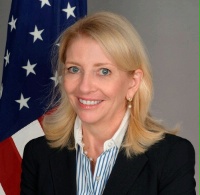 So the news of Henrietta Fore early departure as Executive Director of UNICEF two years before her term is up allows President Biden to nominate a new head of UNICEF. Traditionally the  head of UNICEF has come from the United States and that is highly likely to continue.

The rumor in Washington is that the front runner for President Biden to nominate is Catherine M. Russell.

She served as chief of staff  for the second lady-elect Jill Biden (2009 - 2013). She then became the United States Ambassador-at-Large for Global Women's Issues (2013-2017).  An extract from one of her last speeches in that position:

"The Peace Corps is also a critical component—their volunteers are fostering community-based solutions to empower adolescent girls. The State Department has worked to develop the policy framework of Let Girls Learn. And we’re supporting our diplomats who address this issue in the field. We’re working with our embassies and missions around the world to ensure they have the tools they need to get this issue on the agenda.

And, as President Obama announced this summer, we are piloting a new effort to address the challenges girls face in a holistic manner.

Working with USAID, the State Department is partnering with Tanzania and Malawi to support adolescent girls through safety, health, and education. That means we’ll be working with each country to better ensure the safety of women and girls, as part of our global strategy to prevent and respond to gender-based violence. It means that Malawi and Tanzania are DREAMS countries, so they’ll benefit from the $210 million partnership between PEPFAR, the Bill and Melinda Gates Foundation, and the Nike Foundation. And it means that both countries will be given priority for additional funding and attention through the Let Girls Learn initiative."

Russell was a member of the advisory council of the Biden-Harris Transition Team. Since the Biden team came into office she has  served as the director of the White House Presidential Personnel Office.