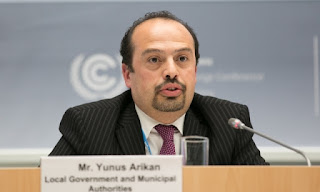 The United Nations is celebrating its 75th anniversary in 2020, under the shadows of a once-in-a-century pandemic, serious challenges to multilateralism, and life-threatening climate and biodiversity emergencies. Due to the global pandemic, these celebrations will be taking place online, but the virtual forum by no means reduces the significance of processes and decisions that will take place in 2020.

ICLEI – representing our network of over 1,750 local governments – contributed to the response of the Global Task Force of Local and Regional Governments to the UN75, with its commitment to accelerate localization of the Decade for Sustainability Action.

In order to ensure sustainability of the world in 2045 – the 100th year of the United Nations – ICLEI is calling for an inclusive new generation of multilateralism that addresses COVID-19 pandemic, responds to climate emergency and adopts a new deal for nature.

Local and regional governments must be at the heart of this new United Nations. Multilateralism is only as strong as the sum of its parts, and the participation of cities and regions in global processes – true multilevel participation – ensures that the voices of diverse communities around the world can be heard. A new generation of inclusive multilateralism that fosters and incorporates multilevel collaboration has the potential to strengthen collective global action at a time when it is greatly needed.

Here are the four cornerstones at the heart of ICLEI’s proposal for multilevel collaboration in the age of inclusive multilateralism.

The cornerstones of a holistic approach to inclusive multilateralism

The four levels of interaction proposed below form the base of a holistic approach to inclusive multilateralism as envisioned by the United Nations Secretary General. Together, they can create a level-playing for the engagement of local and regional governments with the United Nations system as well as national and federal governments.

Thanks to the growing recognition of local and regional governments as a solutions partner, as of 2020, many UN agencies are engaging directly with cities. Built on different engagement, governance, visibility and funding models, some of these engagements are lasting partnerships, but others fizzle out after a couple of years, having raised expectations but delivered limited outcomes. At the same time, the options for the engagement of local and regional governments and their networks in the governance of these initiatives, including share of resources as well as leadership opportunities, are becoming fewer and less effective.

In order to overcome such barriers, and in support of the vision of the UN Development Reform, ICLEI proposes an annual dialogue, under the auspices of the UN Secretary General. This dialogue should bring together leaders of the networks of local and regional governments through the Global Task Force of Local and Regional Governments (GTF) with the UN Sustainable Development Group as well as all chiefs, heads and presidents of UN Assemblies and Multilateral Environment Agreements.

Such a dialogue would aim to provide much needed synchronization and strategic guidance for partnerships. The process should be supported by the Friends of Multilevel Action, which consists of UN Member States that support and facilitate multilevel collaboration both at the UN and at the country level. These annual dialogues could be held before or after the regular meetings of the UN SG with the UN heads. These strategic sessions could be further supported with an annual dialogue of selected leaders of local and regional governments with the UN heads, as well as technical preparatory sessions, each led by the respective UN agency and their counterparts within the GTF and facilitated by an expanded team of Local2030, with appropriate funding generated jointly.

The process should function in tandem with the regional, national and local level activities described below. The current internal governance of the GTF and Local2030 initiative should also be further advanced in order to respond to these new processes and modes of engagement.

The networks of local and regional governments have made significant progress in terms of their contributions to the annual sessions of the UN processes. However, they are rarely present at the relevant discussions and sessions led by the UN Regional Commissions throughout the year. In fact, it is at these meetings that implementation is regularly monitored, evaluated, reviewed, and customized according to regional priorities.

In order to increase multilevel engagements with the respective UN Staff and delegations at this regional level, UN Host cities could be supported with additional staff and resources in order to play a much more active role at this level.

With the evolution of the UN Development Reform, the role of the UN Resident Coordinators has been elevated. The current system envisages that the UN Resident Coordinators act as the bridge between the respective national government to all the UN agencies, based on national priorities and under the guidance of the UN Secretary General. This approach is also consistent with the trend of nationally-driven commitments and plans, supported by the facilitation of the UN agencies and transparency through regular multi-year decision making processes.

In order to overcome such challenges, the UN Resident Coordinators could be advised to establish appropriate channels to engage with national associations, networks and partners of local and regional governments in their work. Such innovative mechanisms would reflect the spirit of inclusive multilateralism at the national level. The Local2030 hubs could also play an important role in such processes, which can enhance their effectiveness as well.

4 – Local engagement, by mobilizing additional resources to champion local and regional governments engaged in the work of the UN

Due to increasing numbers of initiatives and new innovative processes, more and more opportunities are offered to technical and political representatives of local and regional governments at the UN events. While these events offer important visibility for local actors and local action, in most cases, these are designed as one-off events and do not support work at the implementation level.

Provided that committed local and regional governments and their supporting networks receive appropriate technical and financial resources, these event engagements should be based on and linked to substantive local achievements or commitments. The selection processes for engagement should be fully transparent and managed by the networks of local and regional governments based on their technical expertise. Additional opportunities should be further developed in order to engage members of local, municipal and regional councils, senates and parliaments, to ensure multi-party awareness and political buy-in for long-term sustainability policy, commitments and initiatives.

This holistic approach to inclusive multilateralism will be further discussed at the UN75 session at the Daring Cities Global Virtual Forum on 23 October 2020 with the City of Bonn. A proposal will be presented for adoption at the ICLEI World Congress on 14-17 April 2021, hosted by the City of Malmö, as well as to the Global Task Force of Local and Regional Governments.