April 23, 2020
In 2020 and 2021 alone, developing countries’ repayments on their public external debt alone will soar to between $2.6 trillion and $3.4 trillion
Calls for international solidarity have so far delivered little tangible support
An international body is needed to oversee developing country debt relief programmes


Geneva, 23 April 2020 – The UN trade and development body today set out urgent measures needed to head off a looming debt disaster in developing countries reeling from the economic fallout from the coronavirus pandemic.
UNCTAD released a report that calls for a global debt deal for the developing world. It underlines the vital need for decisive action to provide substantive debt relief to developing countries to free up sorely needed resources to respond to the raging pandemic.
On 30 March, UNCTAD called for a $2.5 trillion coronavirus crisis package for developing countries. Even prior to the COVID-19 crisis, many of these countries faced high and rising shares of their government revenues going to debt repayments, squeezing health and social expenditures.
“The international community should urgently take more steps to relieve the mounting financial pressure that debt payments are exerting on developing countries as they get to grips with the economic shock of COVID-19,” said UNCTAD Secretary-General Mukhisa Kituyi.
Unsustainable debt burdens
The coronavirus pandemic hits developing economies at a time when they had already been struggling with unsustainable debt burdens for many years, as well as with rising health and economic needs. 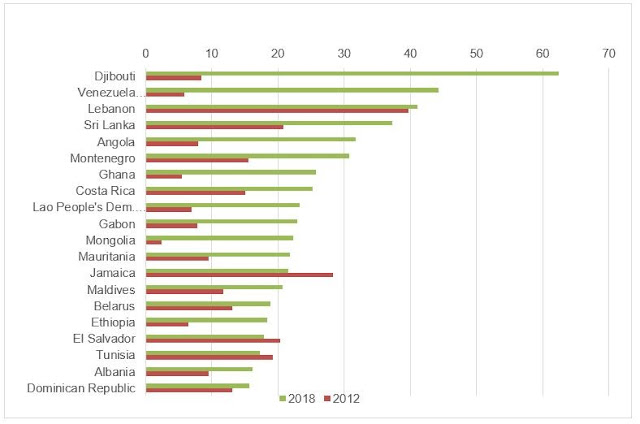 Source: UNCTAD secretariat calculations based on World Development Indicators (WDI), IMF World Economic Outlook (WEO), Economic Intelligence Unit database (EUI) and World Bank Quarterly External Debt Statistics (QEDS).
According to the report, developing countries now face a wall of debt service repayments throughout the 2020s. In 2020 and 2021 alone, repayments on their public external debt are estimated at nearly $3.4 trillion – between $2 trillion and $2.3 trillion in high-income developing countries and between $666 billion and $1.06 trillion in middle- and low-income countries.
Figure 2: Redemption schedules for public external debt, bonds and loans, all developing countries, 2020 and 2021
(Trillions of current US dollars) 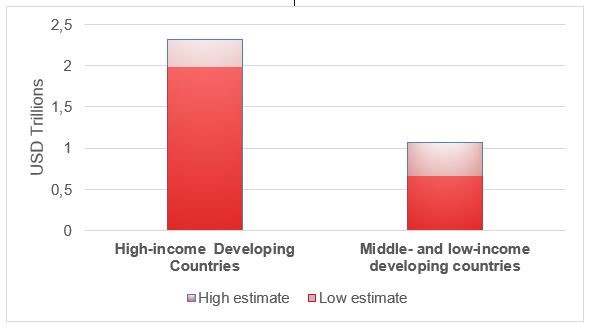 Source: UNCTAD secretariat calculations based on World Bank QEDS, IIF Global Debt Monitor, IMF Global Debt Database  and World Bank Development Indicators. Note: Data refer to sovereign debt for HICs and to public external debt for MICs and LICs.
The financial turmoil from the crisis has triggered record portfolio capital outflows from emerging economies and sharp currency devaluations in developing countries, making servicing their debts more onerous.
“Recent calls for international solidarity point in the right direction,” said Richard Kozul-Wright director of UNCTAD’s globalisation division that produced the report, “but have so far delivered little tangible support for developing countries as they tackle the immediate impacts of the pandemic and its economic repercussions.”
UNCTAD outlines three key steps to translate the calls into action:
Step 1: Automatic temporary standstills…
Such standstills would provide macroeconomic “breathing space” for all crisis-stricken developing countries requesting forbearance to free up resources, normally dedicated to servicing external sovereign debt.
The standstills, if long and comprehensive enough, would facilitate an effective response to the COVID-19 shock through increased health and social expenditure in the immediate future and allow for post-crisis economic recovery along sustainable growth, fiscal and trade balance trajectories.
Step 2: Debt relief and restructuring programmes …
The programmes would ensure the “breathing space” gained under the first step is used to reassess longer-term developing country debt sustainability, on a case-by-case basis.
On April 13, the IMF cancelled debt repayments due to it by the 25 poorest developing economies for the next six months. This debt cancellation is estimated at around $215 million.
On 15 April, leaders of the Group of 20 leading economies (G20) announced the suspension of debt service payments for 73 of the poorest countries from May to the end of this year.
However, more systematic, transparent and coordinated measures towards writing off developing country debt across the board are urgently needed, the report says. It suggests that a trillion dollar write-off would be closer to the figure needed to prevent economic disaster across the developing world.
Step 3: An international developing country debt authority …
To take the first two steps forward, the UNCTAD report proposes the establishment of an International Developing Country Debt Authority (IDCDA) to oversee their implementation and lay the institutional and regulatory foundations for a more permanent international framework to guide sovereign debt restructurings in future.
This could follow the path of setting up an autonomous international organisation by way of an international treaty between concerned states. Essential to any such international agreement would be the swift establishment of an advisory body of experts with entire independence of any creditor or debtor interests.