Obituary for Martin Khor - an undaunted fighter for the poor and underprivileged, a passionate believer in a more balanced and inclusive multilateralism 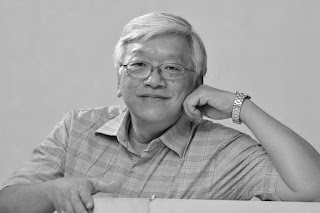 We are greatly saddened by the passing of Martin Khor, a long-time friend and colleague, an undaunted fighter for the poor and underprivileged, a passionate believer in a more balanced and inclusive multilateralism, a rare intellectual and eloquent orator, an icon of the Global South worthy of veneration, greatly respected for his struggle for justice and fairness against the dominance and double-standards of big economic powers.


Martin was born in 1951 in colonial Malaysia, still under British rule, to a family of journalists. After his primary and secondary education in Malaysia, he left for the UK in 1971 to study at the University of Cambridge, where he obtained his B.A Hons and M.A. in economics, before completing his second Masters in Social Sciences at the University of Science, Malaysia in 1978.  In his Master’s thesis, he grappled with the changing nature of external dependence and surplus extraction in Malaysia as it moved from colonial to post-colonial status, with a view to its implications for the scope and limits of industrialization and development; a study which left an indelible mark on his subsequent engagement and activities in a world characterised by increasingly asymmetric power relations.

He started his professional career as an Administrative Officer at the Ministry of Finance, Singapore before joining the University of Science, Malaysia as lecturer in Economics in 1975.

He became the Research Director of The Consumers’ Association of Penang in 1978, an independent non-profit international research and advocacy organization on issues related to development. The Third World Network (TWN) was created in 1984 at an international Conference on “The Third World: Development and Crisis” organized by the Consumers’ Association of Penang.   In 1990, Martin became the Director of the TWN, perhaps the most important NGO from the developing world with operations globally, both in the North and the South, through offices, secretariats and researchers, including in Penang, Kuala Lumpur, Geneva, Beijing, Delhi, Jakarta, Manila, New York, Montevideo and Accra.

Martin held both positions at the Consumers’ Association of Penang and the TWN until 2009 when he became the Executive Director of the South Centre in Geneva, an intergovernmental organization of developing countries established in 1995 to undertake research in various national and international development policy areas and provide advice and support to developing countries in a variety of international negotiating fora.  Under his leadership, the South Centre became an important voice in discussions on international trade and investment, intellectual property, health, global macroeconomics, finance, sustainable development, and climate change.  During his tenure, the Centre extended significantly the scope and quality of its policy research and advice, building an enhanced reputation and level of trust among developing countries in the struggles to protect and promote their interests.   After leaving the South Centre in 2018, Martin returned to Penang, already suffering from cancer, and acted as Chairman of the Board of TWN until his death on April 1, 2020.

Martin was a staunch multilateralist but not an advocate of globalization, at least in the neo-liberal guise it acquired from the early 1980s.   On the one hand, he was well aware that individually developing countries could not obtain fair deals with major (and minor) developed countries in the international economic system.  On the other hand, he knew that multilateral rules and practices were unbalanced, designed to subject developing countries to the discipline of unfettered international markets shaped by transnational corporations and self-seeking policies of dominant powers in the North, denying them the kind of policy space they themselves had enjoyed in the course of their industrialization.  His efforts focussed on reshaping multilateral rules and practices as a way to bring about systemic changes in the service of development.

Martin did this on three fronts.  From the mid-1980s he focussed mainly on international trade issues, particularly those raised by negotiations during the Uruguay Round, and subsequently in the WTO and the proliferating free trade agreements and bilateral investment treaties that accompanied the shift to a neo-liberal international economic order. Martin was instrumental in bringing the attention of policy makers and activists to the implications of new trade rules for the industrialization and development of the Global South arising from more demanding obligations on tariff and non-tariff measures, industrial subsidies, investment and intellectual property rights.  He made several proposals for reform in these areas to remove imbalances and constraints over industrialization, and economic diversification more generally, in the Global South.  He opposed free trade agreements with developed countries on the grounds that, by simultaneously curtailing the policy space available to governments while expanding the space for abusive practices by the large international firms that dominate international trade, they posed an even greater threat to development than the earlier generation of trade rules under the GATT.  In the aftermath of the Marrakech agreement, Martin was a prominent figure blocking efforts by OECD countries to push for a multilateral investment agreement, to extend the neo-liberal agenda at the first WTO ministerial in Singapore and subsequently at the third meeting in Seattle and to water down the Doha Development Agenda at the Cancun Ministerial in 2003.

The second front concerned the issues around the operations of the Bretton Woods Institutions, notably debt and development finance.  Martin had been a long-time critic of the Washington Consensus, and in particular, the use of policy conditionalities attached to lending by the IFIs which sought to push a series of damaging measures on developing countries in the name of efficiency, competitiveness and attracting foreign investors. But he started to pay greater attention to these after the 1997 Asian financial crisis, arguing against austerity, advocating capital controls, orderly debt work-out mechanisms, multilateral discipline over exchange rates and financial policies of major advanced economies and global regulation and supervision of systemically important international financial firms. He was a particularly strong advocate of these positions in his role as a member of the Helsinki Group on Globalisation and Democracy.  Martin took the helm of the South Centre just before the 2009 Global Financial Crisis hit and was quick to provide substantive assistance to developing countries during the 2009 UN Conference on the World Financial and Economic Crisis and its Impact on Development, identifying the key issues for them and working to ensure their insertion in the Outcome Document. He continued to push hard on these issues through the research output from the Centre while adding the related areas of illicit financial flows and international tax issues to its workload as developing countries sought support on these matters. 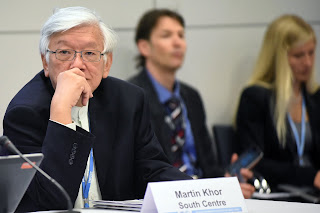 The third, and increasingly prominent, front was climate change and sustainable development which gained added importance in international discussions in the new millennium. Environmental issues had always been part of Martin’s work as head of TWN and as a member of the Commission on Developing Countries and Global Change.  But this widened significantly after the UN Conference on the Environment and Development in 1992 in Rio de Janeiro. Subsequently, Martin became a member of the Consultative Group on Sustainable Development and a regular attendee at the UN Climate Change Conferences that began in 1995 playing a particularly important role in the Copenhagen COP in 2009 where the neglect of the development dimension by advanced economies, their reluctance to acknowledge common but differentiated responsibilities and their naïve belief in market-friendly solutions to the climate challenge led to acrimonious discussions and the eventual collapse of the conference. While he clearly recognized the need to reduce the pace of emissions and protect the environment, Martin was wary that the measures promoted by industrial countries could become instruments to stem development in the Global South.  Under his leadership an important part of the work in the South Centre focussed on this issue. During this time Martin was a strong critic of tighter intellectual property rights, particularly through trade agreements, that restricted the transfer of the technologies developing countries needed to help in the fight against rising global temperatures and to mitigate the climate damage they were already experiencing. This work had a parallel in Martin’s fight to ease the burden of TRIPs on developing countries in dealing with public health emergencies which, thanks to a successful civil society coalition where Martin was a pivotal figure, eventually succeeded in a permanent amendment to the TRIPs agreement in 2017.  Martin’s support to developing countries in the climate change negotiations, carried out through the South Centre and TWN, fostered greater coordination among developing countries in protecting and promoting their development policy space in the climate negotiations, highlighting equity, and stressing the international obligation of advanced economies to provide support to developing countries. 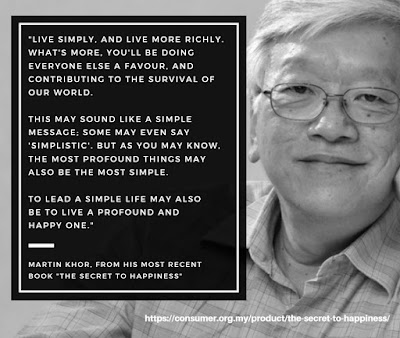 Martin’s approach to advancing progressive solutions on all these fronts was always one of quiet determination driven by a passionate commitment to strengthening the voice of developing countries. He had an envious ability to synthesise and explain complex negotiating issues to a broad audience and in a way that could bring on board activists and policy makers alike. He became a trusted advisor to policy makers and diplomats across the developing world. But Martin was equally comfortable engaging in a productive debate with policy makers from advanced countries and in mainstream institutions.   His was a uniquely calming but authoritative voice for increasingly anxious times, one that has been silenced too soon and at a moment when his commitment to building a fairer and more resilient world was needed more than ever.