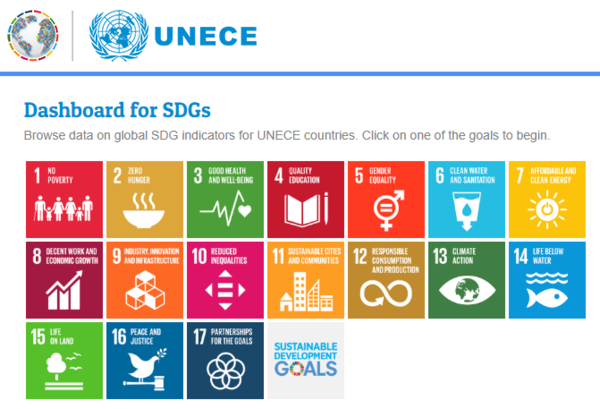 This is a press release from UNECE which can be found here.
The Sustainable Development Goals’ globally-agreed framework of 232 indicators allows everyone—governments, researchers, civil society, business and beyond—to keep track of how our countries are progressing towards environmental, social and economic sustainability.
A new UNECE Dashboard for SDGs, launched ahead of the Regional Forum on Sustainable Development for the UNECE Region, brings together available data for its 56 member countries, providing for the first time a regional perspective on the global indicators.
With data for 80 regionally-relevant indicators across all 17 goals, users can see snapshots of where countries stand for each indicator, view differences between women and men; create graphs and maps; compare countries; access definitions and explanations; and download full datasets for more in-depth analysis.
UNECE Executive Secretary Olga Algayerova emphasized that “Countries from across the UNECE region have made clear the need to enhance monitoring of 2030 Agenda progress – a crucial foundation for the transformative policies needed for the Decade of Action to deliver the SDGs. UNECE’s Dashboard for SDGs offers a tool to support these efforts. But the availability of data remains a significant challenge. UNECE will continue to advance statistical cooperation in the region, mobilizing expertise and building countries’ capacities to help address key gaps”.
Data gaps remain key challenge
SDG indicators can tell us a good deal about progress and challenges across a range of issues, but we still have a long way to go to get the full picture: much of the information we need to guide and evaluate policies is absent, incomplete or of questionable quality.
The major gap is data disaggregation: the 2030 Agenda’s vision to “leave no-one behind” requires all relevant indicators to be broken down by sex, age, ethnicity, for indigenous groups, migratory status, disability status, etc. For that to be possible, a massive increase in data collection is required. To date, the only disaggregation offered in the UNECE dashboard is by sex, where possible with the currently-available data.
Global indicators are classified by an inter-agency group into three tiers, according to the extent to which there are internationally-agreed concepts and methodology, combined with actual data availability. Since the adoption of the global framework, this has helped focus international efforts where they are most needed, for developing methodology and international standards and targeting capacity development in countries to help them improve their data collection and processing.
Currently half of the indicators are classified as tier I, and another 40 per cent as tier II. This is a marked improvement since the global indicator framework was first adopted in 2016, when only 36 per cent of indicators were considered to have a sound internationally-agreed methodology and widespread data availability (tier I).  Back in 2016, 39 per cent of indicators were classified as tier III, meaning either that agreed concepts and definitions were lacking, or data availability was poor, or both. With focused international efforts, including those of UNECE’s many expert groups and task teams, a large number of indicators now have more clear definitions and greater data availability, and this continues to improve.
But despite these significant advances, there are still significant gaps. In the UNECE region, for example, time-use data are sorely lacking. There are established techniques, definitions and recommendations for conducting time-use surveys (including UNECE’s Guidelines for harmonizing time-use surveys) but conducting such surveys remains expensive and is often given a low priority, meaning that important information on the time women and men spend doing paid and unpaid work remains patchy, even in the most developed countries of the region.
Statistical cooperation between countries at UNECE contributes to filling some of the key gaps. For example, on population and housing censuses and national accounts, UNECE guidance and capacity development helps countries produce the statistics that are at the core of almost all goals: a very large proportion of the global indicators require either total population, GDP or both for their calculation.
UNECE’s cutting edge statistical work also drives progress on a range of critical yet hard to measure issues for the SDGs, including:
To ensure streamlined reporting, the Dashboard draws on data from the United Nations Global SDG Database.
United Nations Economic Commission for Europe
Information Unit
Palais des Nations,
CH-1211 Geneva 10, Switzerland
Tel.: +41 (0) 22 917 44 44
Fax: +41 (0) 22 917 05 05
Email: unece_info@un.org