I had the pleasure to sit down at the Pathos Café on 1st avenue and talk with Professor Jean-Paul MOATTI while in New York during the UN 2018 High Level Political Forum (HLPF). The discussion was to focus on the work of the independent group of scientists (IGS) producing the 2019 edition of the quadrennial Global Sustainable Development Report (GSDR). The call for the Report was in Transforming our world: the 2030 Agenda for Sustainable Development:

“83.       Follow-up and review at the HLPF will be informed by an annual SDG Progress Report to be prepared by the Secretary General in cooperation with the UN System, based on the global indicator framework and data produced by national statistical systems and information collected at the regional level. The HLPF will also be informed by the Global Sustainable Development Report, which shall strengthen the science-policy interface and could provide a strong evidence-based instrument to support policy-makers in promoting poverty eradication and sustainable development. We invite the President of ECOSOC to conduct a process of consultations on the scope, methodology and frequency of the Report as well as its relation to the SDG Progress Report, the outcome of which should be reflected in the Ministerial Declaration of the HLPF session in 2016.” (UN, 2015)

Felix: Professor MOATTI can you explain a little more what is behind the creation of the group of scientists:

I may be wrong. But I think in the history of the UN this is unique (creation of the IGS).

There have been attempts of UN agencies giving to independent panels the role of making the assessment of the problem and even addressing the strategy to deal with it. In my field, which is health, we know about the Commission on Macroeconomics and Health established by the World Health Organization in 2000 or the more recent one on the social determinants of health. At the global level of the UN though, this independent assessment appear as a unique experience.

There was already GSDR reports produced by UNDESA being carried out annually to provide inputs to the new High Level Political Forum (HLPF) each year.
[note from interviewer there were three UN produced reports, 2014, 2015 and 2016]

Member States however wanted a full independent assessment so the Secretary General asked 15 experts representing a variety of backgrounds, scientific disciplines and institutions, ensuring geographical and gender balance. To support our work, a UN Task Team made up of UNDESA, UNDP, UNESCO, UNCTAD, UNEP and the World Bank has been setup. In addition, should we need it, we could call on any other UN agency for support.

As this is an ‘independent’ report, no part of it is negotiated with Member States, This is unlike other UN Reports – even the Intergovernmental Panel on Climate Change (IPCC) Report has a negotiated Executive Summary.

Felix: What will the GSDR look like and the timeline?

The GSDR will have two functions (i) evaluation (ii) set the model for the next quadrennial report. 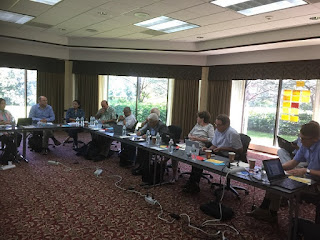 This report will be presented and discussed during the next 2019 HLPF convened under the auspices of ECOSOC in July but most importantly, convened also under the auspices of the UN General Assembly in September with participation at the highest-level –  Heads of State and Government. One thing is clear and need to be asserted, drafted by an independent group of fifteen scientists and experts, the report will address sustainable development and be based on best scientific evidences and facts - not alternative ones. For instance, the finest peer-reviewed research published in international journal (Nature, Science, etc.) acknowledged global warming as a fact which will not be set aside or ignored in the report to please some Member States.

Felix: How is your outreach to stakeholders and governments?

We hold meetings during major events such as this HLPF to brief and report on the status of the report, and engage in discussions with Member States and other interested stakeholders. We recently hold a multi-stakeholders consultation workshop in Africa in May 2018 at Port Elisabeth. This consultation was a side-event to the Future Earth conference which gathered about 350 participants to discuss the role of science with society and the SDGs in Africa.  We are also planning to have two other consultation workshops in the next coming months in Latin America and Asia. We have in-depth interactions with the scientific community either through existing networks of Academy of Sciences or directly through participation of IGS members to Conferences. In addition, we received more than 350 contributions from scientists all ov er the world through an open internet consultation.
Specific case studies (at national, regional levels) will be highlighted in the report. We have also invited organizations and individuals to submit peer reviewed material.

Felix: Can you tell us more on what came out of the African consultation?

The GSDR consultation side-event in Port-Elisabeth capitalized on a rich transformative change more than fifty participants (academics, policy makers, civil society organisations, and the private sectors) coming from the five African regions and the diaspora. There were six key messages:


As a matter of fact, my GSDR colleague, Dr Ernest Foli from Ghana presented those key messages during yesterday’s plenary session on “Advancing science, technology and innovation for the SDGs”.

Felix: Where is the science and research feeding into the report coming from?

One thing which needs to be particularly pointed out here is the need for scientific cooperation and the need to strengthen the research capacities of the global South.

Africa produce only 2% of the world scientific knowledge, and half of it comes from South Africa and Nigeria alone. There is no-one-size fit all model when it comes to finding transformation pathways for sustainable development: there is a strong need for contextualization and balanced perspectives. Enabling our scientific colleagues from what we call in UN langue’s the “developing countries” and supporting the emergence of future researchers in these countries is a prerequisite to better understand the context-depend interlinkages between SDGs, identify the sweet spots and leverage to capitalize on synergies and overcome or mitigate trade-offs between them.

Such capacity building activities will be also crucial if we are to accurately follow-up with consistency the SDGs and their targets via reliable scientific observatory and information networks. It will be crucial to adapt our collective actions. The climate for instance do not know political boundaries, what happen in the monsoon systems of west Africa is impacting the whole earth system and vice-versa.

Science and what we call the emerging field of sustainability science where research are driven by interdisciplinary works and towards operational action would play a key role for SDGs success.

Felix: Finally, what will be the structure of the report, will it deal with interlinkages?

The analysis of interlinkages among SDGs and their targets underpins the analytical understanding of the transformations—behavioral, institutional and societal changes—needed to help achieve them efficiently and in mutually supportive ways. The report will analyse the key issues, obstacles and opportunities for defining and proceeding along such transformation pathways.

Understanding the interlinkages within their particular context as well as the global context will be critical to implement the SDGs in a holistic way. For instance, among many other key issues of the 2030 agenda, the interlinkages between poverty, inequality, and inclusive and sustainable economic growth will be addressed in light of recent and solid scientific research.

Interdisciplinary research are providing insightful evidences to support well informed decision making and policy coherence. Another example that comes to my mind is the interlinkages between SDG15 and 3 recently analyzed by a joint team of epidemiologists, virologists, and ecologists: this multidisciplinary team shed lights on deforestation as a factor of new emerging pandemics such as Ebola.

As I mentioned earlier, there is a strong need of contextualization as the interactions between the goals, targets, or indicators are highly context-dependent. This is also why we opened a consultation process across regions to reach out to local experts for their contribution and views on the report content and integrate local inputs and geographical case-studies.

Understanding how progress towards one of the SDGs or targets affects the set of options to reach any other Goal or target, and what solutions and/or policies may minimize incoherence in SDGs implementation and maximize positive synergies between them, will be an important component of the report. Such understanding is key to “operationalize” the 2030 agenda and put the global goals into the realm of reality.