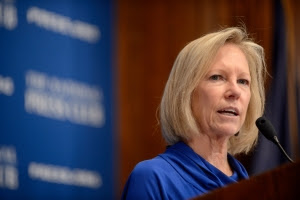 By: Kathy Calvin, President & CEO, United Nations Foundation. In 1997 Calvin joined America Online as senior vice president and chief communications officer. In 2001, following the AOL–Time Warner merger, she became the president of the newly created AOL Time Warner Foundation.
As 2018 gets underway, the United Nations Foundation is turning 20, and we find ourselves reflecting on the world then and now, the values that drive our work, and the future that lies within our grasp if we have the audacity to seize it.Last year shook the world, from political upsets to accelerating technology to individual voices made into a movement through the power of the #MeToo hashtag. We witnessed devastating natural disasters amid one of the hottest years on record and intractable horrors from Myanmar to Yemen to the Central African Republic while at the same time journalists and storytellers had no shortage of tales of bravery and kindness to share.
In this era of change and challenge, one thing is clear: The world we want will only be achieved when we choose action over indifference, courage over comfort, and solidarity over division.
Twenty years ago, the world faced some similar challenges, and Ted Turner responded by putting his personal fortune and reputation on the line in support of something bigger than himself. Ted was concerned by growing problems that transcended borders and saw a huge roadblock to progress – a lack of funding for the United Nations and a failure to lead for the common good by the United States.
But rather than shrug it off as someone else’s problem, Ted made a bold and lasting move – committing $1 billion to UN causes and creating the UN Foundation. This historic gift was a pre-emptive boost to the power of working together, and specifically the role of the UN in meeting global challenges. Through this act, Ted pioneered a new generation of philanthropic activism and partnership to support the UN in reaching those at greatest risk in our world.

The generation that followed saw the Millennium Development Goals, the creation of the Giving Pledge, innovative financing institutions like the Global Fund and Gavi, the Vaccine Alliance, and powerful new coalitions to advance UN priorities from access to justice to sexual and reproductive health and rights.
At the UN Foundation, we spent our first 20 years helping catalyze and incubate innovative UN initiatives and bringing together students, businesses, faith communities, digital influencers, and more to advocate for the UN and drive real progress for real people: children who are safe from measles and polio; families who are breathing cleaner air; and girls who are students instead of child brides.
By bringing new partners to the table over the last 20 years, we've been able to invest more than $2 billion in UN causes to enable more people to move from poverty to possibility and embrace their futures in larger freedom and dignity. And along with our sister organizations, the Better World Campaign and the United Nations Association of the USA, we’ve built the largest network of U.S. supporters of the UN, which last year held nearly 300 meetings on Capitol Hill in a single day to encourage U.S. leadership in the world and at the UN.
We are just getting started.
As the pace of change quickens, we are looking to the next 20 years, inspired by Ted, and eager to support the UN in tackling the most compelling challenges of our day. We know we will need both speed and stamina.
UN Secretary-General António Guterres and his team have swiftly moved to take on the big issues, including reform of the UN to make it relevant and impactful for today and tomorrow. At a time of global uncertainty – of emerging threats and protracted crises – the UN continues to do what no other country or organization can. It mobilizes concerted action against problems like climate change, outbreaks, and terrorism; rallies the world around the values of human equality and dignity; responds to urgent humanitarian crises; and promotes peace and security through peacekeeping, sustainable development, and prevention. Simply put: A strong UN is the world’s best investment for progress. 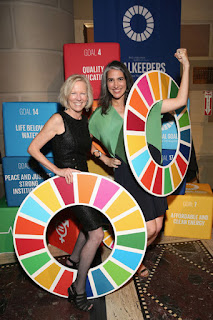 Of course, the UN was founded, and is driven, by “we the peoples” – and the power of the individual to stand up for our common humanity also guides us. From college campus chapter leaders advocating for the UN, to teenage girls refusing to let inequality be the status quo, to mayors and CEOs leading the charge for climate action, it is individual changemakers who are advancing our common cause.

There is power in all of that purpose, when we act with and for each other. In fact, the world is healthier, more prosperous, and more peaceful than ever before; and any inhumanity or narrow instinct that still plagues us is neither permanent nor inevitable.

What happens next is up to all of us – and there is a lot at stake. At the UN Foundation, we will be pushing ourselves even harder to live our values, to resist the distractions of the daily churn and to see around the corner, and to leverage partnerships for progress.

In the coming years, we expect to continue to focus especially on supporting cross-cutting drivers to accelerate the Sustainable Development Goals, like data, gender equality, and transformative business and finance mechanisms; strategic coalitions to meet some of the biggest collective challenges of our time, from climate change to antimicrobial resistance; efforts to revitalize international cooperation in the 21st century; and intensified communications and constituency-building to support the UN and effective global action, especially among young people. True to our origins, we will tell a lot of stories, and we will also listen.
So we want to hear from you, and we are eager to work together to advance good ideas that have enduring impact. As a global community, we can create change at scale. This belief is what led to the creation of the UN Foundation; it is what has powered the UN since a half century before that; and it is what can power the future we want.
With very best wishes for a new year of passion, purpose, and promise,
Kathy Calvin UN Foundation