So there are rumors are New York on who has actually applied for the head of UN Habitat so I thought I would share them and also suggest that a new name i haven't heard but which would definitively be worth interviewing.

So as I mentioned in the lats blog  the Czech Republic Minister Ms Karla Slechtova has applied and as noted in the comment section of the last blog so has Prof Oyeyinka Oyebanji from Nigeria who is a former UN-Habitat staff. There is from India  the Deputy Executive Director of UN Women Lakshmi Puri. There is also a candidate from China and another from the Republic of Korea. If anyone knows the names please put in the comment slot below. 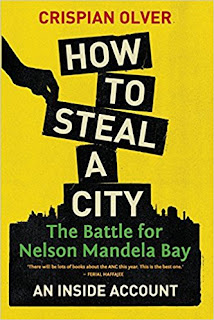 There is an excellent planner from South Africa Christine Platt and I’d like to throw in, though it is possibly too late,  a new name the former Director General of the South African Department of Environment and Tourism Chippy Olver. Why? Because he would completely shake up the organization and knows how to run a bureaucracy. He also ran the South African team that put together the World Summit on Sustainable Development. But what does he know on cities? He has just published the book out How to Steal a City: The Battle for Nelson Mandela Bay which I strongly suggest all urban people read on what can go wrong.Chippy was sent in by the national government to look at what was happening. The book lays bare how the administration was entirely captured and bled dry by a criminal syndicate, how factional politics within the ruling party abetted that corruption, and how a comprehensive clean-up was eventually conducted. This shows the bravery of a former civil servant when battling corruption and other problems in a city – would be a great head of UN Habitat.

I still am a huge supporter of Liz Thompson former Health and Environment Minister of Barbados. In the end I don’t know if she applied but knows the UN, knows both government and UN bureaucracies (she was ASG for Rio+20).

I understand there are a couple of other present or former UN Habitat staff that have applied but I don’t know their names and finally I heard that Carolina Toha the former mayor of Santiago is a candidate.

In appointing the new head of UN Habitat, the Secretary General must look for someone with the right skills. They need to be able:


Finally, this year’s Habitat resolution in front of the UNGA second committee should be withdrawn as the partnership resolution has been until the Secretary Generals second report has been tabled and the new head of UN Habitat has been appointed.