By Jacques Prescott is a sustainability consultant and associate professor, Chair on Eco-advising, Université du Québec à Chicoutimi; as a former employee of the Québec department of environment, he was at the heart of the government’s sustainable development approach.


A referenced version of this article is available here:

In 1987, the United Nations Commission for Environment and Development published "Our Common Future". Written under the chairmanship of Gro Harlem Brundtland (then Prime Minister of Norway), this report presented the results of a global consultation aimed at proposing a comprehensive program for sustainable development. Thirty years later, what is retained of the Brundtland report and what progress do we note on the way to sustainability?
Lucid recommendations 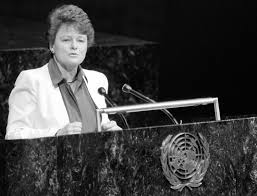 The Brundtland Report proposed solutions to the most serious environmental problems of the 1980s and a definition of sustainable development that is still widely recognized: "Development that meets the needs of the present without compromising the ability of future generations to meet their own needs."
On the way to sustainable development, Brundtland recommended changing the quality of economic growth, mastering demographics, meeting basic human needs, preserving and responsibly developing natural resources, taking the environment into account in developing new technologies and integrating ecological and economic concerns into decision-making.
The Brundtland report proposed to reduce energy consumption and develop renewable energies, reforest regions affected by desertification, reform the tax system to reduce pressure on ecosystems, adopt international conventions to protect nature. It also stressed the importance of fighting poverty and injustice, which are both causes and effects of environmental problems.
The Brundtland Commission called on international institutions to take better account of social and environmental objectives and to alleviate the debt of poor countries. It recommended a reduction in military spending in favor of the fight against poverty and inequality and called on big business for more responsible production and consumption. In fact, it showed that the global economy and ecology are deeply intertwined.
Impressive spin-offs
The Brundtland Report catalyzed the UN's approach and guided action by governments, civil society and business. Following Brundtland, the UN summits have adopted international conventions, declarations, objectives and action plans that reflect its findings and recommendations. Many states followed this path. Organic farming, environmental certification, corporate social responsibility, renewable energy production, responsible investment, green economy, life cycle analysis, greening of processes, have all been developing, but also green marketing, all too often misguided in greenwashing, allowing unscrupulous companies to unduly polish their image as a good corporate citizen.
What "progress" since Brundtland?
Progress has certainly been made since Brundtland. The number of people living in extreme poverty has decreased, more people have access to safe drinking water, fewer children are dying at an early age and fewer mothers die during childbirth. Some countries are experiencing unprecedented prosperity, albeit an apparent one. In fact, the plundering of natural resources and the degradation of the environment are reaching furious levels, climate change is threatening people and ecosystems, and the planet's support capacity is about to be exceeded. The gap between rich and poor is steadily widening, insecurity is growing, democracy is slipping, false news and unique thinking are invading the media.
Current economic growth relies in fact on the impoverishment of the middle classes, indebtedness, the economic control of banks, the overconsumption of natural resources and the growth of inequalities. Corruption continues to grow, just like military budgets. Despite a strong commitment by governments to sustainable development, significant action is slow in coming. Politicians seem more inclined to respond to lobbies than to the legitimate expectations of their constituents.
The challenges of sustainable development
Thanks to Brundtland, we better understand the challenges that confront us and the fact that sustainable development offers the best opportunity to choose our future. Despite this awareness and the efforts of a growing number of individuals, the situation continues to deteriorate to the point of undermining our optimism. What can be done to improve it?
Ecologists advocate sobriety or voluntary simplicity. But how to convince the richest of such a turn? As early as 1984, in his book «Le défi écologiste» (the ecological challenge), Quebec’s ecologist Michel Jurdant suggested raising awareness, demystifying quantitative progress, proposing alternative lifestyles, and encouraging a democratic public debate. I would add that we must also educate young and old at the principles of sustainable development, further regulate and reduce the power of the financial community, focus on subsidiarity, empower leaders, promote independent information, and especially recognize the influence of interest groups. A program that concerns us all, on the path of a development that the Brundtland report centered on collaboration, sustainability, well-being, prosperity and peace.