Guest blog: PPPs in Brazil: A solution to infrastructure needs or a problem for fiscal sustainability? 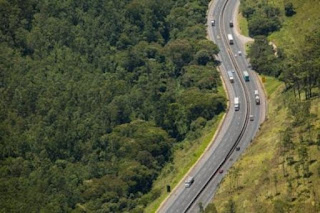 Guest blog by: Gerardo Reyes-Tagle and Marcos Siqueira originally published  on the Inter-American Development Bank web page here.
The Public Private Partnership (PPP) market in Brazil is extremely active and has played a central role in policymakers’ agendas for decades. In total, 773 projects have reached financial closure in the last 20 years in Brazil, according to the World Bank’s Private Participation in Infrastructure database.  These projects represent about one fifth of all private investment in infrastructure in the entire developing world. Brazil continued to lead the statistics in the first half of 2016, reaching financial close in 27 new contracts, out of the 108 identified in developing countries.
There are not only a lot of PPPs, but they are also increasingly diverse. In fact, the country is moving away from the focus on traditional, user-funded economic infrastructure to include different types of free-to-the-user or subsidized social infrastructure in the PPP pipeline, such as hospitals, schools, prisons, street lighting, urban renewal initiatives, and so on.
As a result, the number of PPP contracts with public financial support jumped to 98 in 2016 from just 3 in 2006, according to the graph below, most of them occurring at the subnational level.  These contracts include direct payments made by the public contracting authority, typically using budgetary resources, to the private investor during the contract.
Such contracts have been used not only in traditional economic sectors such as transport and energy, but also in sectors such as health, education, penitentiaries, sports and cultural facilities, management of environmental assets, among others. The Brazilian example shows that PPPs can be a flexible instrument to not only finance infrastructure but also to deliver solutions to different social problems. 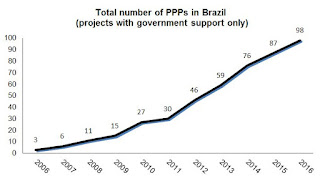 In other words, the continuous use of PPPs in Brazil is an example of how the Value for Money obtained through PPPs can be spread to different sectors and different service users.
Innovations in the use of PPPs pose new challenges
This new wave of contracts brought, however, new challenges for policymakers and the overall professional community to overcome. The main challenge is to keep the possible fiscal liabilities of such contracts under control and to communicate them transparently to society and the investment community.
PPPs impose financial burdens on the government’s budget in different ways. The most obvious is the explicit contractual obligation to make regular payments, which is generally established by the contracting authority to subsidise user payments or as the only source of revenue for the operating company. These are direct and explicit liabilities, which are typically spread throughout the contract. The direct liabilities are also commonly associated with the amortization of the asset, which will be transferred back to the government at the end of the contract. This typically includes unconditional payments, which are unaffected by the operational conditions of the service(s) being delivered.
PPPs, therefore, create long-term commitments through these obligations that are very similar to repayments of debt.  This is precisely why international accounting standards have indicated that, in most cases, these commitments should be reflected in the government balance sheet as debt.
PPPs and contingent liabilities in Brazil
The second type of liabilities emerging from PPP projects are contingent liabilities, or payments that are uncertain and depend on the occurrence of future events. These are associated with the sophisticated risk allocation schemes enshrined in PPP contracts, commonly put in place to reduce the volatility of the private investor’s revenue stream. Minimum revenue guarantees, exchange rate guarantees, and additional payments triggered by specific cost increases are all examples of contingent financial commitments that PPPs can create. Naturally, these liabilities are a source of fiscal risk that need to be accounted for accordingly in the budgetary and accounting documents.
Given these liabilities, the long-term fiscal sustainability of infrastructure policy implemented through PPPs depends on the capacity of governments to identify, as early as possible, the fiscal consequences of contracts, monitor them effectively through the project cycle, manage their effects, and promote unrestricted transparency. In the Brazilian context there are important advances and challenges that need to be addressed.
Brazil has developed a detailed regulatory framework on how contracting authorities should address the fiscal consequences of contracts, following most international best practices. These regulations specify that governments need to account for direct liabilities in terms of public sector debt, need to register the fiscal risk in the budget and balance sheet, and need to actively disclose all data in bi-monthly intervals.
Subnational governments and PPPs
Looking forward, the challenge is that subnational governments have been unable to fully meet the requirements of the regulatory framework. This is particularly true for subnational governments that are more active in using PPP instruments but struggle with the challenges of building capacity to manage the fiscal risks.
Most subnational governments do not assess, quantify, monitor or mitigate the potential fiscal consequences of PPPs in time to make adequate decisions about affordability.  They also do not communicate the total effects of the contracts in terms of the debt or fiscal risks.
Furthermore, there is limited central government enforcement on the application of the regulatory framework, as well as monitoring of the national aggregate impact of those contracts. In short, many subnational governments are embarking aggressively on PPP schemes on social infrastructure without properly assessing and managing the potential fiscal risks stemming from such contracts.
The lack of practices for managing the public-sector commitments that are key to many PPP contracts need to be addressed rapidly by policymakers and the professional community in Brazil. For PPPs to be a viable solution to address infrastructure needs, the country needs to put in place a long-term perspective of sustainability.
To support the country in this effort, the Inter-American Development Bank has published a study called “The fiscal impact of public-private partnership contracts: A case study about the institutional environment and practice in Brazil” with concrete recommendations to help Brazil address fiscal risks from PPP contracts.  The study is in Portuguese and you can download it here. 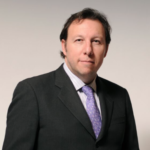 The study builds upon an internationally comparative perspective and recommends initiatives and policies to enforce the regulatory framework, build capacity at the local level, and promote transparency at the aggregate policy level, among others.  These reforms will help Brazil ensure that PPPs have a long-lasting positive effect on its social and economic development.
Gerardo Reyes-Tagle is Senior Fiscal Economist of the IDB's Fiscal Management Division. He has over 15 years of experience working on issues related to fiscal policy, tax administration, quality of expenditure and debt sustainability, and has led various structural reform programs, analytical studies and technical assistance in the Latin American region. 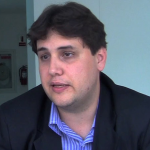 Marcos Siqueira is an expert in public-private partnerships (PPPs) in Brazil, with a multidisciplinary trajectory and more than 10 years of experience in the identification, preparation and management of PPPs. From 2008 to 2014, Marcos was the head of the APP Unit of Minas Gerais, Brazil, having received several national and international awards for his technical excellence.
Gerardo Reyes-Tagle Marcos Siqueira. PPP