May 12, 2017
((Rogue CNN exists in a parallel universe to ours where a property developer and reality TV star gets elected President))
After so many mistakes the Trump White House has in Michael Strauss a competent and effective Press Secretary who Dr HunterThompson would be proud of.
Instead of taking the Sean Spicer APPROACH – Spicy to his Saturday Night Live friends – of defending President Trump Strauss has embraced the ‘no facts’ – ‘false news’ era with delight.
In his latest press conference when asked about the administrations climate change policy he explained: 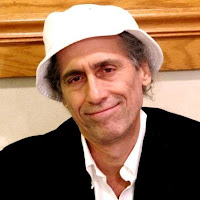 “Look you guys we all know that climate change is happening and if anything, the predictions are on the conservative side. But and this is a big but the President got elected on the basis of re-opening the coal mines and it’s not going to get bad enough in his 8 years to worry about. It’s the Presidents in 2030 and beyond which will have to sort out the mess that we cause.”
Such brazen truth shocked the press corps into silence. John Roberts Fox News Chief White House correspondent suggested that he might like to point out that the President has said that climate change hasn’t been proved. Strauss shot back.
“Look foxy news even your owner has said that climate change is happening and News International is a carbon neutral company – which means Fox is carbon neutral too… You don’t get it. We need to make more money off the fossil fuels before they are banned and this Administration plans to do just that.” 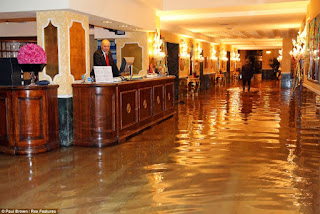 Reacting to this on Rogue CNN the Wolf asked his panel what they made of Strauss as the new Press Secretary.
Bernstein said – “Look Michael has been a straight talker for as long as Ive known him. Spicy would have tried to defend the President and as we know it would have been a mess. This new approach at least is honest. Increasingly Trump seems to be modeling himself on Willie Stark." Anderson a well know film buff cuts in "Stark is from the 1949 Oscar winning film 'All the Kings Men'  It plots the rise and fall of a corrupt politician, who makes his friends richer and retains power by dint of a populist appeal. Sound familiar? It isbased on a novel by Robert Penn Warren first published in 1946 which has been in the top 100 novels for Time Magazine. In 1947 it won the Pulitzer Prize. It also won Oscars for Best Actor (Broderick Crawford), and Best Supporting Actress (Mercedes McCambridge)." 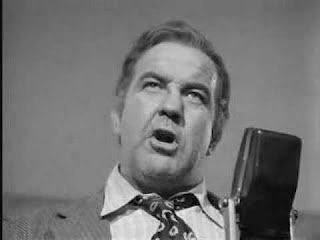 Stone jumped in:"look the President is doing as much as he can to support his base and the companies that gave him and will give him money --- what is wrong with that. He is probably one of the few honest politicians out there. Isn't that what America is all about?"
Wolf: “we have to break into the discussion to go back to the White House another Presidential Order is being signed" 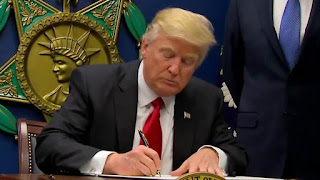 President Trump:
“I am now signing Presidential Order 12-7-1941 ‘The insurance of hotels against Democrats order’ This order will take effect immediately and will require additional funding from Medicare to be put into an insurance fund to protect our hotels from rising sea water.” We cannot have our hotels impacted by rising sea levels caused by china’s economic growth.”
Well back to the panel.  "Van what do you think is behind this Executive Order?" 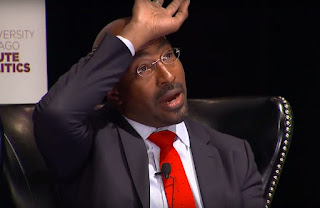 “CAN’T YOU ALL SEE HE IS ENSURING THAT WHEN CLIMATE CHANGE HAPPENS – WHICH HE KNOWS IT IS GOING TO - THEN HIS HOTELS ARE GOING TO BE COVERED BY TAXPAYERS MONEY OK!!! STRAUSS TOLD US AS MUCH. HE IS USING THE PRESIDENCY TO MAKE MONEY AND PROTECT HIS INVESTMENT”
Wolf: "Well Anderson – Van seems to have exploded and so I guess we need to go to a commercial break while clearing the studio of the mess."

Before going I've just been told that it has been announced that Michael Strauss will be opening next Saturday Night Live where rumor has it he will drive over Spicys lectern with a monster truck. 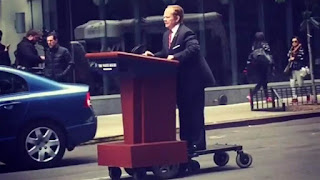