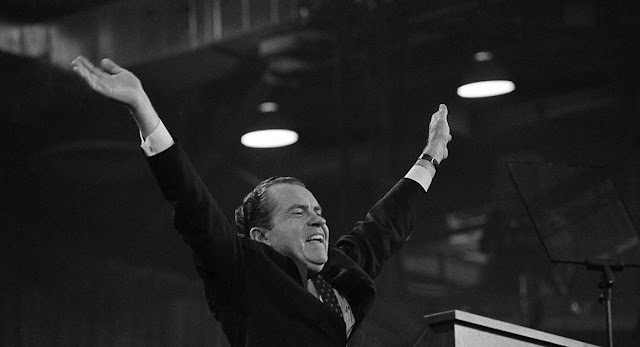 I am, like I am sure many others, both exhausted by the Trump Presidency and absorbed by it. It is like it is a really bad reality show.
Every day when I go to the gym I catch up on the latest developments on the Muslim ban, President Obama wiretapping, the health care debacle, being invaded by aliens from the planet Zargon and of course the Russian scandal.

In one of my quieter moments I reflected that the issue of a Presidential candidate having meetings with people from other countries abroad  -- isn't something new.
There is of course Richard Nixon 'Tricky Dicky' as many of us affectionately knew him, creator of the EPA, the Council for Environment Quality in the White House. He was also the President who signed the clean water and air acts and tried to have UNEP HQ in Washington. But in the 1968 Presidential election he  persuaded the South Vietnamese to cancel the Peace Conference in Paris because it might help his Democratic rival Vice President Hubert Humphrey. As Politico reported in 2014:
"Tom Charles Huston, the author of a comprehensive, still-secret report he prepared as a White House aide to Nixon. In one of 10 oral histories conducted by the National Archives and opened last week, Huston says “there is no question” that Nixon campaign aides sent a message to the South Vietnamese government, promising better terms if it obstructed the talks, and helped Nixon get elected.
Nixon’s campaign manager, John Mitchell, “was directly involved,” Huston tells interviewer Timothy Naftali. And while “there is no evidence that I found” that Nixon participated, it is “inconceivable to me,” says Huston, that Mitchell “acted on his own initiative"
You can find the details published on the web-site of the Richard Nixon Presidential Library.
President Johnson did know this was happening and did order, when a President could, the wire-tapping of members of the Nixon campaign. Vice President and Democratic candidate Humphrey decided not to make Nixon's actions public as he saw it as "an uncommon act of political decency."
Of course, South Vietnam was one of the US's allies. But the action may have had an impact on the 1968 election. A successful peace agreement could have influenced some voters. The vote was close Nixon 43.4% and Humphrey 42.7%  - just over 500,000 votes. It would have only taken 250,001 to change their minds and we would have had a President Humphrey.
Of course, if Humphrey had won then Watergate would not have happened nor the illegal bombings in south East Asia.
I am sure after that no Presidential candidate would do something like that again or would they? 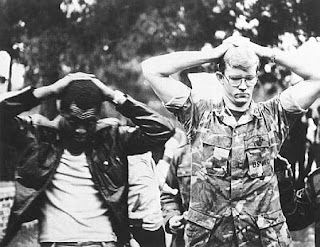 This then brings us to Ronald Reagan and the Iran Hostage Crisis.
In early October President Carter was winning in the opinion polls 44-40% over Reagan. The botched rescue at the end of October turned the public against President Carter with Reagan winning the Presidency 51% to  41%. But what if Reagan had been working with the Iran's to ensure that the hostages were not released before the election? The New York Times reported in 1991 that:
"One of the accounts is provided by Gary Sick, a Middle East specialist who helped handle the Iranian hostage crisis as a member of the White House staff in the Carter Administration. He says he  heard what he considers to be reliable reports that a secret deal involving the hostages was begun during two meetings between William J. Casey (Reagan's campaign chairman, who went on be the Director of Central Intelligence) and the Iranian cleric (Hojatolislam Mehdi Karrubi, a representative of Ayatollah Ruhollah Khomeini) in a Madrid hotel in July 1980"
Here clearly it was working with a foreign power who was a US enemy if it is true. The hostages were released as President Reagan was being  sworn in as President on  January 20, 1981.
Sarah McLendon, a Texas journalist who was the grand dame of the White House press corps at the time asked Bush: ‘What will the people do if they ever find out the truth about Iraq-gate and Iran contra?'
“George Herbert Walker Bush: ‘Sarah, if the American people ever find out what we have done, they would chase us down the street and lynch us.’ 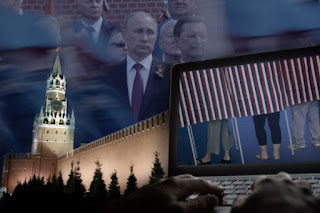 Now it is too early to know for sure if the 2016 election will turn out that President Trump's staff will be shown to have worked with Russia to influence the election.
It is true that Russia tried to influence the election -- but yet we will have to see if the campaign was engaged in illegal activities.
There is clearly a lot of smoke but is there fire? As I write this blog President Trump's approval rating is around 35%. This is about where President Nixon's was in 1973 as the Watergate scandal started to really take hold of the media. Nixon,had just to remind people, had approval ratings in the 60% when he was re-elected in 1972. He left office with approval ratings of 25% or thereabouts. To put this into context over the whole of his presidency, Kennedy averaged a 70.1% approval rating. This was the highest of any post-World War II president. Taking all the Presidents from  1938 and 2012 is 54%. I am guessing for the first 100 days President Trump will average around the 40% mark or below.
If there is, as Michael Flynn President Trumps former National Security Council Adviser asks for immunity from prosecution, - collusion on the Russia question - we may be back to the Watergate question. Did the President know and if yes when.
Meanwhile the President is gutting climate change policy and it is doubtful if the SDGs will feature at all in this Administrations priorities.
But to put this election into perspective it seems that this has happened before.