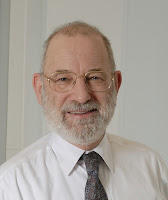 Jack Moss has 30 years of experience throughout the world in the private sector side of the water services industry. He joined AquaFed in 2005 as senior adviser, contributing to its creation and international recognition. He has been the Executive Director since 2015.

Water pollution is as dangerous as, if not more so than, air pollution”. Having made this statement publicly several times recently I should explain what I mean.

Climate has a high political profile through the United Nations Framework Convention on Climate Change (UNFCCC), regular Conferences of Parties, international treaties and extensive media coverage. While the recognition of water issues is growing, they remain far behind in attention and action.

There is now a large body of science that fewer and fewer people contest, about climate change. Climate change is the result of air pollution.

In contrast, whilst most people know instinctively that polluting water is a bad thing to do, the levels of water pollution remain very high and in most places, it is getting worse.
In a water stressed world, water pollution makes scarce, usable water, even scarcer.
Water pollution kills and maims individuals: people, animals, fish, birds, plants - all living beings. It harms the environment, societies and economies.

A further danger is that some forms of pollution give rise to bio-accumulation that causes toxins to be concentrated in organisms that provide food for higher level species and eventually humans.

Removing pollution from water can be expensive, but often less expensive that rectifying the damage it causes.

If real action on air pollution and climate is slow, that on water is even slower – glacially slow. 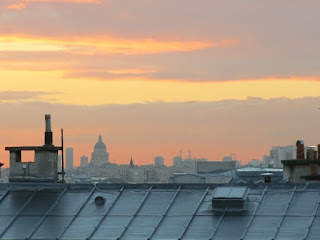 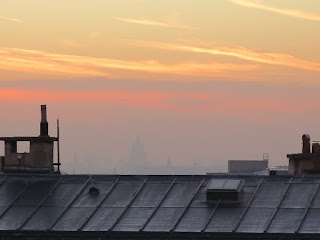 Where does particle pollution of the air end up? Two views of the morning sky over Paris (France) – Left, during a pollution alert – Right, a few days later after rain. The pollution is mostly carried to the river by rainwater runoff © J Moss 2016

Heat is itself a pollutant that degrades water quality, dissolved oxygen content and water ecosystems. In some places a warmer climate is causing changes in fish populations, in others the ability for water cooling of power stations and other industrial installations is impaired.

“Ignorance is bliss” until the consequences bite
While climate data are now very substantial, those on water in general and water pollution in particular are very scarce. There are very few accurate data on the levels and impact of water pollution. What there is paints an alarming picture.

It is estimated that 80-90% of used, and therefore polluted, water is discharged to the environment without any kind of treatment (source). Data on the global levels and impacts of pollution arising from agricultural activities and from runoff from urban areas is also very inadequate.

In the USA, the Environmental Protection Agency has found that 65% of all major utility wastewater treatment facilities are not in compliance with their permits in one way or another, and of the 334 major facilities which are currently most seriously violating their discharge permits, three quarters are municipal wastewater treatment plants (source).

There is a common misperception that wastewater treatment works cause pollution. This is false. They concentrate pollution so that they can remove it. However, they cannot remove all forms pollutants so that some difficult to treat toxins pass even the most advanced and well operated plants.

The real levels of water pollution from diffuse sources, mainly poor agricultural practices, but also unmanaged surface runoff from towns and cities, are unknown. Detailed studies however show that these forms of pollution carry many dangers.

The broad impacts of water pollution on human health and welfare, economic activity and the environment are known but scarcely measured. These impacts are serious and have very significant consequences and costs, even if these cannot be demonstrated adequately with hard figures.

The impact on public health of water related diseases is known to be very significant. The levels of mortality, morbidity, stunting due to water borne diseases such as diarrhoea are estimated to be very significant, but in many cases they are unreported or underreported. There are real concerns that waterborne cholera is on the increase and may be mutating into more virulent and resistant strains permitting it to spread in extent (source). Cholera thrives in nutrient rich and warm water. In other words, polluted water helps it to spread.
Both air pollution and water pollution can be prevented or treated. In most cases, this costs money in the short-term, but the benefits are felt quickly and the savings that result are immense.
Prevention is better than cure. The many harmful effects of polluted water can be overcome relatively cheaply in comparison with the costs of curing the ills that arise.
Half the hospital beds in the developing world are occupied by people suffering from water related diseases (source).
The cost of constructing hospitals, running and equipping them, developing and producing drugs and training doctors and staff is enormous. Health care is one of the largest industries in the world, at close to 10 percent of global GDP (source). Reducing water pollution could give rise to major savings in this area alone.
Add to this the costs of medical insurance, lost economic output and reduced educational attainment and then, the economic and social impact becomes totally unsustainable.
Many forms of water pollution never need to occur. They can be prevented by good practice or by applying legal standards and almost all the remaining forms of water pollution can be removed by collection, treatment and restoration.

Political priority must be given before it is too late
In spite of all these strong arguments, the action needed to prevent and cure water pollution does not attract much attention. It needs to!
Everybody can do something to reduce the amount of pollution they cause. To do so they need to be aware of the dangers and damages that can result and share a sense of responsibility for both the causes and the cures.
Overcoming water pollution is a shared problem and therefore requires shared action. The better individuals understand this the more likely they are to support their political leaders in their search for solutions. This will break the current vicious circle of ongoing degradation and change it to a virtuous circle of responsible and remedial action.
Above all it needs high-level engagement from country and local governments to start the process for it to be successful. Political leaders have to give the lead and show their inhabitants that it is worth setting aside the budget and raising the charges necessary.
The 2030 Vision for Sustainable Development and the Sustainable Development Goal (SDG) number 6 (most specifically, target 6.3 - By 2030, improve water quality by reducing pollution, eliminating dumping and minimizing release of hazardous chemicals and materials, halving the proportion of untreated wastewater and substantially increasing recycling and safe reuse globally (source)) has been designed to drive this outcome. For the first time in history there is a global objective that is well defined and has a process for monitoring progress and measuring success. The goal applies to all countries and what each has to do is specific to their own conditions, but it matters to everyone that progress is made quickly.

******************
AquaFed is the International Federation of Private Water Operators. Open to all companies and associations of companies of all sizes and from all countries, it aims to contribute to solving water challenges by making Private Sector know-how and experience available to the international community. It brings together more than 400 water companies that serve hundreds of millions of people in 40 countries.
jack Moss water