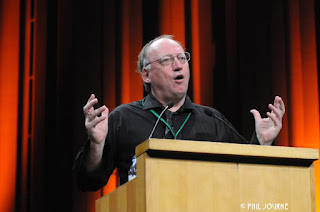 Felix Dodds is a Senior Fellow at the Global Research Institute and a Senior Affiliate at the Water Institute at the University of North Carolina and an Associate Fellow at the Tellus Institute. He was the co-director of the 2014 Nexus Conference on Water, Food, Energy and Climate and has become a leading voice for the Nexus. Felix makes the start for a new series of Nexus interviews.

First published on the NEXUS PLATFORM
NEXUS Platform: The Nexus approach was very much created at the Bonn 2011 Nexus Conference and sharpened in Chapel Hill 2014. After now five years of Nexus: did the initial idea ­­– increase the understanding of the interdependencies across water, energy, food and other policies such as climate and biodiversity – start to work out and why?
Felix Dodds: There is no question in my mind that the Nexus approach was one of the important differences between the Millennium Development Goals and the Sustainable Development Goals. Although not integrated into the targets as much as I had hoped you can see the impact of the discussion initiated by the 2011 Nexus Conference and reinforced by the 2014 conference. It can also be said that the discussion on ‘our Nexus’ saw other Nexuses recognized between, for example, heath, water and climate.
The scientific community always seems to be a bit reluctant if it comes to new terms and strategies. You are very much inside the debate: So how is your personal impression about the Nexus approach today – do people still have their doubts?
I never thought it was going to be easy to persuade the scientific/academic community to move and address Nexus issues. Unfortunately, the reward system in many of the universities does not recognize this kind of interdisciplinary work.
But since 2011 there have been some positive developments. At the global level, Future Earth is clearly a platform promoting interdisciplinary research. In the US, the nexus approach is supported by the State Department, there is a university network on the Nexus and the Nexus global network set up with funding from the Economic and Social Research Council (ESRC). This is always going to be work in progress and will take time.

Governments needed longer to accept the need for interlinked targets

In your recent book "The Water, Food, Energy and Climate Nexus" (March 2016) you stated, “The Nexus approach is not as integrated into the proposed SDGs as might have been hoped.” Can you explain shortly what the hope was and why it failed?
Although there was strong support for the Nexus to be reflected in the four goal areas that did not happen. In retrospect, I think that this might have been different if we had had the conference in October 2013. Governments need longer to accept the need for interlinked targets than we had left from March 2014.
For indicators there was a similar problem to secure interlinked indicators even though there was a clear push by the Statistical Commission and its Interagency Expert Group on SDG Indicators (IAEG-SDGs).
The setting up of the World Data Forum whose first meeting is in Cape Town in January is a recognition that the indicators that have been selected are ‘work in progress’. The Forum will meet every two years and will review new developments on data collection and as and when new indicators are developed start to integrate them into the SDG Indicators. So those of us promoting Nexus indicators work is not finished by any means.
In the Chapel Hill Declaration, you recommended several guidelines for various actors in the field, from the scientific community to governments. Do the addressees listen? What are the main challenges for the actors?
In some ways, it is a little early to judge after all the SDGs only started in January 2016 and the indicators (not all of them) were only agreed at the end of March 2016. Saying that there are some very good developments. In the area of governments 22 countries presented their national reports on how they were doing in implementing the SDGs at the High-level Political Forum (HLPF) in 2016, and I think so far a further 18 have already indicated they are presenting their national reports in 2017. There is the beginning of peer-to-peer learning under this approach. Some have used existing multi-stakeholder platforms to help with the development of their reports.
Some haven’t, and that is a criticism I do have. In the run-up to the SDGs the Foundations created a Philanthropic Platform to show who was working on what and to create the chance for collaboration. This has now been set up in west and east Africa and the Arab region in some cases at country level such as Indonesia and the US. The science platform Future Earth took a lot longer than it should have to be established but now it should start to have a big impact as we move forward.
In the area of local and sub-national government there is the excellent work done by ICLEI/GIZ on the Nexus and UNDP are leading an attempt to localize the SDGs. Through the Global Compact and Global Reporting Initiative companies are looking at how they can integrate the Nexus into their reporting.
The nexus was very much reflected in the water and sanitation section after Rio+20, you wrote in the book "The Water, Food, Energy and Climate Nexus". Is there still a lack of Nexus thinking in other sectors?
There is much more understanding of the interlinkages than there was when the SDGs were adopted, but the pressure needs to continue. At the intergovernmental level there needs to be a lobby for the Nexus approach and at present that is not coordinated and directed the way it should be.

Trump: a setback for the global climate debate

How do you see the current climate change debate in the US? Do we have to expect a setback from the Trump government?
On the positive side, unexpected support for a Trump administration staying in Paris have come from people such as Bill O’Reilly of Fox News. But the challenge for the US is that emissions need to fall by over 80% by 2030 to do its fair share in tackling global climate change. The US government plan to meet existing CO2 budgets is off course, and the Trump Presidency will make it much worse.
I’d suggest that work needs to move to the sub-national level but there are 15 governors who are climate deniers another 9 who have no position on climate change. Only 12 accept climate change and have adopted strong policies. The good things are two of those are California and New York which have large concentrations of populations. But unless the candidates standing in 2018 for the 37 governor races are pro strong action on climate change there will not be the right leadership to tackle it at the sub-national level.
The appointment of Scott Pruitt, the attorney general of the oil and gas-intensive state of Oklahoma, to head the Environmental Protection Agency, can only be seen as a move signaling an assault on President Obama’s climate change and environmental legacy.

Which main goals shall we achieve until ten years of Nexus in 2026?
I would hope that by 2026 all local and subnational governments have integrated the Nexus approach into their planning systems. At the national level I would hope that governments are through their Sustainable Development Strategies ensuring that the Nexus is addressed effectively.
In the Nexus good we had some suggestions of principles for companies to utilize when they are developing their corporate strategies and I would hope that they integrate these and in their reporting ensure that is done in an integrated way.
The world is moving into a very dangerous period with increased insecurity and the Nexus will add to this. We have an opportunity through the SDGs and the Paris Climate Agreement to choose a different path.
I hope by 2026 we can say we did the right things when we needed to.
Interview by Katharina Mikulcak (Nexus Resource Platform, editorial team)
felix dodds nexus