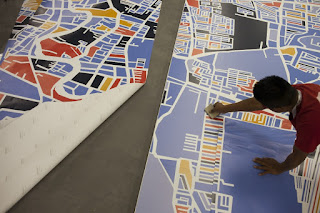 How to chart a sustainable course for urbanization was the topic on the table this month in Quito, at a United Nations mega conference called Habitat III. 40,000 people converged on a city whose life blood is pumped from a perfectly preserved historic centre, classified UNESCO World Heritage. Walking up and down the streets of the Old Town amidst the candy coloured colonial architecture was a real source of pleasure for conference-goers, generating memories that persist well after the conference badge and memorabilia are tossed onto a pile back home.

Quito was an unusual destination for such a mega conference. The chaos on the first day of accreditation underscored this — thousands of people stood in the blazing Equatorial sun all day before getting their conference badge. Police and UN staff alike were overwhelmed by internet crashes, unruly queues, clusters of people demanding special treatment, rising tides of anger and frustration.
As part of a delegation attending from the International Council for Science, I’d say that I was probably on the inner fringe of conference attendees — not directly part of the UN Habitat crowd, or the urbanisation folks, but holding an “accredited stakeholder” badge as part of the civil society process that characterizes most UN conferences of this type: Science is one group among many that is allowed a partial seat at the table to make some statements and have a role witnessing and possibly influencing to a very small degree the final outcome document.

In line with this status, my group was located off-site, a short walk away from the main conference centre where UN Secretary General Ban Ki-Moon and others appeared and spoke on the first two days of the conference. Our location was in the Exhibition Hall, a place for all urban stakeholders to raise their flag, have talking shops, connect, network, do business.
We were a team coming from three organisations: the International Council for Science, Future Earth and the Urban Complexity Lab at the Potsdam University of Applied Sciences. Our space was called Habitat X Change — a deliberate nod to the fact that we were setting aside institutional promotion for the greater good of creating a space for exchanging ideas, learning from each other, being more than the sum of our parts. 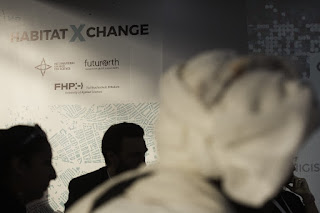 We were essentially in a trade fair type situation amongst other research institutions — the London School of Economics, IIED and other peers were our neighbours in the Exhibition. Our challenge was: how to stand out from the crowd, create a space that was open and inclusive, an attractor that would bring equal benefit to all partners.
It was an experiment in building a shared engagement platform that could drive value to all partners. What did we learn?

2. Location is everything. We were fortunate to have been allocated a prime piece of Exhibition real estate — impossible to miss as you entered the hall, open on all sides to traffic, allowing people to flow in at multiple entry points: coffee seekers, a sleek, interactive table of city visualizations custom-designed by Potsdam FHP, a progamme of daily talks that people could dip into, a magazine display of a newly launched publication called the Anthropocene magazine and a demo of a virtual reality film on a Brazilian favela.
3. Great design + understanding the context is also everything. Our partners at Potsdam FHP, in particular the peerless and impeccable Sebastian Meier, rolled out an incredibly beautiful, fit-for-purpose design for our space and our activities.
We spent many months talking on Skype about what we needed to meet our objectives and how it should look. At all times it felt like we were making stuff up in the dark as the specs of the Exhibition space and where we would be located remained a mystery up until the very last days. And yet, incredibly, we got many things right. We knew we were building a mixed-used space for a mixed audience — a combination of official conference overflow plus peer research organisations, civil society, national pavillions and a smattering of private sector. Coffee was a unifying factor across these groups, but also having a mixed programme that combined talking and hands-on interaction was key. We knew having good flow and an open space were important. We loved the colour scheme that Sebastian came up with and the beautiful design coming from city maps. Our iconic T-shirts were the final finishing touch that pulled it all together.
4. Listening to talks is probably the last phase of engagement. As I mentioned earlier, generating warmth and connection around coffee is a good first step in engagement. Some kind of active, experiential learning — whether it’s around visualization or virtual reality, or looking at a magazine — is a good second step. Sitting down to listen to a talk is really the last step — the sign of a significant commitment to give time, headspace and energy to information exchange, ideas and dialogue. We spent many months curating our programme of events — designing them, filling them with great speakers, slotting them into a shared calendar. But at the end of the day, how much your people love you for the other stuff is probably more important than how great your talks are. This was genuinely a new insight for me at Habitat X Change. The how will inevitably trump the what at these events where peoples’ nerves are frazzled and attention spans are short.
5. The best conversations take place while queueing. Long queues in the hot sun became a staple of life at Habitat III, and pretty soon people were setting their anger and frustation aside to work these spaces for connections and ideas. We shared a good laugh with our German colleagues from GIZ on ‘harvesting’ ideas (aka Art of Hosting) about the New Urban Agenda and civil society engagement in one of these queues. As Habitat III is the last of the big UN frameworks in the 2015–16 chronology: Sendai Disaster Risk Reduction Framework, Sustainable Development Goals, Paris Agreement on Climate Change and the New Urban Agenda, the focus henceforth will be firmly on implementation. Everyone has to pivot — from researchers to policy wonks, and nobody is quite sure who will have the last laugh in this, for turning thinkers into doers is never an easy task.
6. Private sector folks are sniffing around the SDGs for value This came up in a debrief conversation I had with a researcher on the plane home. He had a stand right near ours, and he said the one unexpected takeaway from Habitat III was the number of private sector consultants who had approached him to seek collaboration around some aspect of implementing the Sustainable Development Goals. A lot of what organizations like mine do at such conferences is engagement for influence, whether it is via the official UN channels to get text into the final framework documents, or less visible types of influence via national delegations for outcomes in the follow-up implementation phase. The researcher had his own theory for what was changing.

“People realize that there is a lot of money to be made under the SDGs framework, but they know they can’t do it without the expertise of the research community. That’s what they’re increasingly coming to us for.”

7. Volcano, rainforest or Galapagos? Every great UN conference opens the door to a unique travel opportunity, and Ecuador was a cornucopia of options.