Habitat III where the world gathered in Quito and adopted the New Urban Agenda at the third United Nations Conference on Housing and Sustainable Urban Development. finished on the 20th of October. We thought it would be a good time to look to the Post Quito period.

The conference has shaped a new global action plan for cities. Second, it marked the end of a long and arduous negotiation process considering the difficult negotiation terrain defined by low political impetus, and third it opened yet a new chapter- of relooking at the mechanisms for implementing the New Urban Agenda. What it failed to do was to link substantively the New Urban Agenda to the Sustainable Development Goals and in particular to the over 140 targets that will need to be implemented at the sub-national and local level. This will impact on the implementation of the agenda as governments will focus primarily on delivering the Paris Climate Agreement, the Sendai Framework on Disasters and Risks Reduction and the Sustainable Development Goals and on utilizing the Addis Ababa Action Agenda to help fund these.
In the post Quito period, for those who have continuously followed international governance, whether of the global environment with its coterie of Multilateral Environmental Agreements (MEA), or development with the entire cluster of UN development institutions, one thing stands out. That successful achievement of agreed goals depends on bringing to bear effective means of implementation and an enabling environment.

Here, the means of implementation must be given an interpretation beyond financial resources, capacity building, knowledge sharing and technology transfer. For it must include among others institutions whether legal or structural tasked with managing and reporting on operationalization of mandates. That is precisely why Member States requested the Secretary General to commission an independent evidence based assessment of the UN-Habitat to identify and recommend measures needed to enhance its effective response in light of the New Urban Agenda.

It’s clear that there is still work to be undertaken to ensure that the SDGs are effectively delivered at the local level. The SDG Agenda and elements from the NUA has a huge and real potential in accelerating the localizing and implementation of the SDGs thereby advancing sustainable development.

There is no question that much of the Paris Agenda and the SDGs will be delivered at the sub-national and local level. The UN- Habitat is a weak body in the UN system and it clearly needs to be strengthened to perform its role as a focal point in the coordinated implementation of the New Urban Agenda.  While at the same time working much closer and collaboratively with the rest of the UN system – which it hasn’t effectively done in the past.

That is why the Secretary General of the United Nations now needs to move with speed to launch an independent assessment of the UN-Habitat so that Member States can take the necessary adjustments to make it fit for purpose.

Who will undertake this review? This could be potentially controversial. While the New Urban Agenda outcome set out the scope, it did not expressly provide for the options of conducting the assessment. Rather, it conferred on the Secretary General the sweeping responsibility to do it without clear terms of reference.

It will therefore be important for the Secretary General to navigate safely against a possible political turbulence that may characterize the process. Here, he might opt to employ a safer route-the expertise within the UN System itself. And possible bodies are the Joint Inspection Unit (JIU), the Office of the Internal Oversight Services (OIOS), the Board of Auditors or an amalgam of a team drawn from the three.

Another option could be for him to set the political tempo straight from the word go by selecting equal number of experts from the global South and global North. Supporters of this will argue logically that the New Urban Agenda is universal in nature and contributions to its implementation should reflect that reality. Of course, the approach may guarantee some level of comfort and legitimacy of the report thereby increase its chances of approval. But could be problematic as it might be open to ‘effective lobbying’. 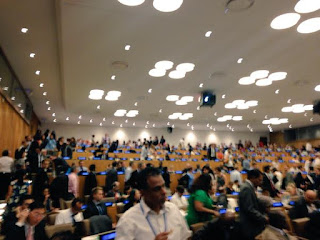 He may as well consider the option of getting experts from countries ready to provide financial resources for the exercise. The outcome has not asked him to directly mobilize the requisite financial resources considering the zero growth of the UN budget. This route can be counterproductive considering the politics of strengthening the UN- Habitat that nearly paralyzed the preparatory process. It is the least attractive probability as it is ready fodder for questioning the objectiveness and impartiality of the outcome.

The point here is that the report should at least find some traction with the vast majority of member states if it is to be considered favorably.  Both the substance and process of arriving at the same should be seen as objective and legitimate. And so, while the Secretary General has the discretion in directing the exercise, it is equally important that he reflects and balance that reality with expectations; the assessment and its outcome must be objective, impartial , consultative  and forward looking.

What has become clear in recent years is that the current financial mobilization trend is away from core funding to earmarked funding. Now the earmarked funding has outperformed the non-earmarked resources. Is that a referendum on the confidence of the leadership at the UN- Habitat by the funders? This clearly needs to be evaluated in the context of the leadership and whether this is good for the overall normative and operational work of the agency.

The normative and operational focus of the UN-Habitat needs to provide clear strategic vision beyond the New Urban Agenda to include cross cutting issues focused on the Paris Climate Agreement and the SDGs. With the coming in of Mr. Antonio Gutterres, the new Secretary General of the United Nations, the current Executive Director is expected to leave office (perhaps even before) or in October 2017 after completing his two terms.

Without a doubt, his successor has a lot to do. The first brief will be to ensure that the UN- Habitat   works in a more coordinated and coherent manner, inspires and enjoys confidence of all Member States and offers sound leadership to the staff and the entire UN family in promoting sustainable urbanization and human settlements including the New Urban Agenda. It is only then that UN- Habitat will be fit for purpose.