All change at the UN

With Antonio Guterres as the new UN Secretary General now agreed by the UN General Assembly it will not only be Hilary Clinton who will be working with their transition team.  A number of key positions in the secretariat are expected to change. We also don't know how many of the present Under Secretary Generals and Assistant Secretary Generals he will want to change. This includes the appointment of a new Deputy Secretary General or possibly two? There have been suggestions particularly in the report  by the ECOSOC the Independent Team of Advisors Co-Chaired by Mr. Juan Somavia (former ILO Executive Secretary) of Chile and Mr. Klaus Töpfer of Germany (former Executive Director of UNEP) that there should be two one for development (sustainable) and the other for peace and security.

In the summer we also saw the change at UNEP with Erik Solheim taking over as Executive Director. 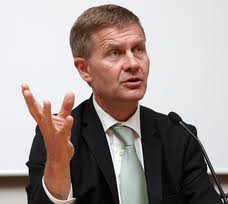 He faces a very immediate challenge of expressing the vision of what should UNEP now represent. Many of the key environmental issues have been floated off as conventions with their own heads and governing boards. Achim took UNEP into the Green Economy. Is this the right place for UNEP?

The next 14 months will see the chance for the UN Secretary General to put in new heads at a number of UN bodies.

Convention on Biological Diversity: The Executive Secretary position is vacant it is expected that the recommendation of appointment by UNEP Executive Director may have to wait until the new UN Secretary General is in office.

In 2018 the heads of UNESCO, UNICEF and UNCTAD will come up for decisions on who will head them.

So by the first review of the Sustainable Development Goals the UN may have a large number of new faces heading their Agencies, Programmes and Conventions from those that were in place when the SDGs were agreed. This is also true for member states the UK already has a new head, Brazil, Canada does and in the coming year there will be a new President  in the US and elections in France and Germany, These changes are both opportunities and challenges. The 2019 Heads of State review of the SDGs must underline to this new world leadership how very important the SDGs are to their terms in office. They WILL be judged on their commitment to the SDGs and to building a fairer more equitable and sustainable world.