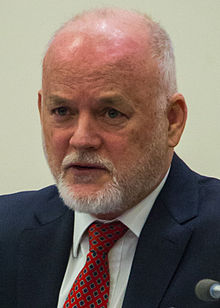 The new President of the UN General Assembly Fiji Ambassador Peter Thompson has become the first PGA to administer the new Oath of Office.
This Oath and resulting requirements are a direct result of the fall out from former PGA President John Ashe alleged activities. On the 13th of September the GA debated a resolution based an extensive report from the  Ad Hoc Working Group on the Revitalization of the Work of the General Assembly (document A/70/1003 )
The UN the General Assembly adopted be consensus the resolution outlining a number of “milestone” reforms to reinvigorate its work as it moved into its eighth decade, notably to improve the transparency and accountability of its President’s Office The Assembly decided that the president-elect would take an oath of office and observe a code of ethics — each detailed in annexes I and II of the text and to be attached to the Assembly’s own Rules of Procedure.
As UN PGA Peter Thompson took office he said:

"In your wisdom and your dedication to the highest standards of governance, in fealty to the purposes and principles of the Charter of the United Nations, the membership of the United Nations has this year created a Code of Ethics for the Presidency of the General Assembly. I applaud the results of your efforts and I embrace the spirit and word of the Code.

In addition, you have decided that for the first time in the history of the United Nations, and for all sessions henceforth, at the time of transition from one session of the General Assembly to the next, the incoming President shall take an Oath of Office.

It is now my high honour to take that Oath, within this historic fulcrum of the community of nations, witnessed by you the anointed representatives of the nations and by the broad citizenry of humanity observing our proceedings today. I now raise in my right hand the Charter of the United Nations and hereby affirm the prescribed Presidential Oath of Office."