Reflections on the UN Secretary General debate 12th of July 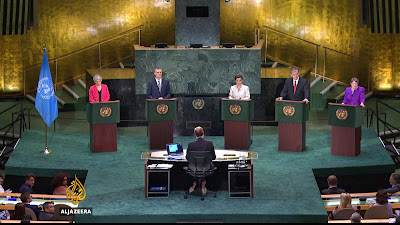 by Alexandra Coe and Felix Dodds

On Tuesday the 12th of July the candidates for the next United Nations Secretary General were debating in the UN General Assembly Hall which was excellently moderated by Al Jazeera's James Bays and Folly Bah Thibault.

The first thing to say about the debate is that ALL the candidates performed well and conveyed strong leadership capabilities needed for the next Secretary General. The debate was so much more refreshing than the US Democratic and  Republican debates for President, and gives hope that there are still among us true leaders.

The pressing question of the SG debates was if the rotation around the regions was most important in this year’s selection or if representation by a woman was more important at this point in UN governance.  It’s important to understand that the UN has been, since Javier Perez de Cuellar, operating a regional rotation among the five official UN regional blocks. The Eastern European Group has never had a Secretary General therefore they are next in the rotation. So if the priority of regional rotation should dominate this year’s selection was a key question for discussion during the debate. The list of candidates now includes 4 who are not from Eastern Europe. The second issue, that the UN has never had a female Secretary General offered much lively discussion throughout the debate.  If this latter priority prevails, we might be in January 2017 in an interesting leadership space where the USA, UK, Germany, the US fed, the IMF and the UN all have female heads.

One of the strengths of the UN is of course that’s it is a global organization with a global staff. In the context of the non-Eastern European candidates, the newest candidate was announced on the 7th of July Christiana Figueres, the former head of the UNFCCC and the architect of the successful Paris Climate Agreement. Figueres is a Costa Rican career diplomat and positioned her success in these negotiations with her opening statement. Also performing well from the non-Eastern European side was Susana Malcorra, Argentinian foreign minister and former chief of staff to Ban Ki-moon from 2008-12.

In the Eastern European block, the best candidates were Vuk Jeremic, Irina Bokova,and Vesna Pusić   Vuk Jeremic was the Serbian foreign minister 2007-12 and president of the UN General Assembly from 2012-13. There was a question on the issue of his region that had been engulfed in wars and massacres - but was now at peace. He suggested this was a good reason to consider him as he had been through the impacts of war and peace.  He has faced some criticism among NGOs for using his diplomatic muscle to fight recognition of Kosovo, whose independence he rejects and which he has referred to as Serbia's "Jerusalem."

Jeremic angered much of the region by taking a critical stance on the role of international courts like the UN's International Criminal Tribunal for the former Yugoslavia (ICTY).   In the debate he said: "I want to say that I am immeasurably proud of my ancestry and of my ancestors who, during World War II, courageously stood up against crimes whose ferocity is unmatched in history, against their Jewish and Serb fellow citizens," These types of statements may prohibit his ability to govern effectively as SG.

Irina Bokova as head of UNESCO has had to deal with a 22 percent reduction in her organization's budget after the United States suspended its funding (2011) over a resolution admitting Palestine to the UN cultural body.  There are many who have been impressed with her approach contrasting significantly with what happened in UNDP. She said: “I had to make profound reforms of the organization to cut the red tape, to decrease the levels of management. At the same moment to protect the geographical distribution and increase   gender representation. We are arriving at almost a parity... now at 47%”

Vesna Pusić received huge applause when she said. “I am not only a woman; I am a feminist. The UN has been for seventy years dominated by the male worldview, but that is only 50 percent of life experience, and now it is time for the other 50 percent.”