July 01, 2016
UNEP is under new leadership with Erik Solheim (Norway) the new Executive Director of UNEP and so i took the chance to interview him as he takes up the helm from Achim Steiner. 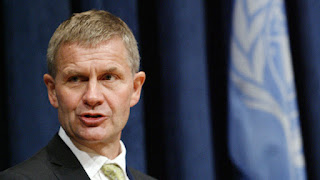 I am very much looking forward to being engaged full time at UNEP. There are such good people in the organization and outside the organization working with UN Environment to ensure that we are an effective voice for the environment.

2.     Some would say that UNEPs success over the last 40 years with the establishment of so many MEAs has weakened the core of UNEP as most key ideas are now being dealt with at different COPS. How could the clustering of conventions (started with the chemical and waste conventions) be advanced quicker and what role would UNEP play with these clusters when they are set up?

I have met with the many of leaders of the conventions and we have an excellent relationship. I believe that UN Environment needs to be much closer to the people. If the people in the streets are not really interested in environmental issues, we will fail.

We need to focus on environmental issues close to their heart. For example, pollution is one of the main causes of death in the modern world. People smell and feel pollution in the big cities of the world every day. This is an example of an issue closer to people than the climate. But the fortunate thing is if we attack pollution we also make huge strides on climate change with the same means.

On city pollution, we can collaborate with UN Habitat and the World Health Organization, and with activists in the realms of health, environment and cities. We should be working together to address these serious challenges.

City mayors and city governments are all strong key partners but businesses are as well. There are enormous business opportunities, such as providing renewable energies and better and less polluting cars, and we should work closely with the private sector to realize these.

3.     2015 may be looked as one of the most successful years for multilateralism with the agreements on the 2030 Agenda. This recent UNEA and UNEP seemed devoiced from the preparations for the HLPF this year what do you think needs to happen to make sure that the environment voice is much loader in the follow up to these agreements?

The High-level Political Forum and Sustainable Development Goals are important, but only fully understood by a minority of people. That means that there are billions out there who do not understand them. We need to speak about them in understandable language to make the environmental voice heard. But let’s also speak about the beauty of nature and the fantastic, unbelievable and vulnerable planet that we live on together and that we can only protect together.

4.     One of the core elements of UNEPs work is ‘Assessing global, regional and national environmental conditions and trends’ and one of the most well respected outputs from UNEP is the Global Outlook Reports and associated material. How can the material produced be much more effectively used to inform decision makers?

We need to have a constant dialogue with key discussion makers in politics and business as to what kinds of data they find useful. If the data isn’t used it has a limited value, but we can play a critical role and set a standard for this. I invite a dialogue on how we can provide the data that people need.

We need an emphasis on outreach. We need to reach out, we need to change language, to speak the language of people and stop using acronyms. UN Environment should focus on environmental issues that are close to people’s hearts.

Pollution, as I’ve said, is a good example. You can smell it, you can see it and it impacts your health. People have a big heart for the polar bear, tiger and elephant, and you don’t need to explain that these species need our help. But speaking in a theoretical way of ‘the ecosystem’ isn’t so understood. We need a language that is closer to the people’s language.

5.     The work undertaken in the UNEP Inquiry is much respected but the work done by UNEP FI office hasn’t been at the center of UNEPs profile while it has played a critical role in transforming the sustainable finance landscape. How do you see UNEPs work in this area developing in the future and are there grounds for more collaboration with other bodies such as OECD and NEPAD?

OECD is strong on issues related to investment and tax - these are the key two financial flows for environment and development - so OECD is a key partner for the UN on these issues. But in general we need to focus on the big money in the world. Private investment is at least 100 times bigger than official development assistance. We need to look into how ODA can be used to leverage the much bigger pool of private money into green development and into the poorest nations.

In general, there is no lack of money in the world. There is an abundance of money in the world and the big investors are running around not really knowing where to invest it. At the same time there are a lot of good projects, programmes and green ideas. Often investors do not see these as investable. To bring them to being investable, to take some of the risk, here there is a role for public money and collaboration with others. This is something that UN Environment can help with.

The UNEP Inquiry into the Design of a Sustainable Financial System is an example of what UN Environment can achieve. The Inquiry is in Xiamen in China at the moment to prepare for the G20 summit with the Green Finance Study Group. UN Environment and the Inquiry will be part of the discussion, so bringing the environmental issues into the main arena is an example of the very important role we can play.

6.     As you know UNEA still doesn’t have a stakeholder engagement policy. What is your vision for working with stakeholders? In the area of working with industry some NGOs have been critical of the UN working with some companies. Should they consider only working with companies who have endorsed the UN Global Compact Principals?

With stakeholders I will have an open door policy. I will have a strong focus on business. Many companies are well ahead of governments, companies such as Unilever, Total, Nestle or Kellogg’s. I also look forward to working with environmental organizations and other civil society organizations. I look forward to a dialogue with all stakeholders and to learn from them as well.

We should be naming and shaming and naming and faming. I want to speak positively of companies that are doing well because other companies can learn from them. But if they do less well, then we should name and shame them. That is the strongest driving factor in politics and business. If people start buying from companies that are doing well, the others will change very rapidly. If people vote for politicians that go green, the politicians will change rapidly. Naming and shaming and naming and faming are an example of a strong role UN Environment can play.

Erik Solheim is a Norwegian politician for the Socialist Left Party (SV). He is the new Executive Director of UNEP, the United Nations' Environment Programme.
Solheim was leader of the Socialist Youth from 1977 to 1981, party secretary from 1981 to 1985, and member of the Parliament of Norway from 1989 to 2001. He was party leader from 1987 to 1997. He was appointed Minister of International Development in 2005 and also Minister of the Environment in 2007, and sat in both offices until 2012. Until being appointed minister, he worked as a diplomat and a participant in the Norwegian delegation that unsuccessfully attempted to resolve the Sri Lankan Civil War before the outbreak of Eelam War IV. From 2013 tot 2016 Erik Solheim was Chair of the OECD DAC (Development Assistance Committee).