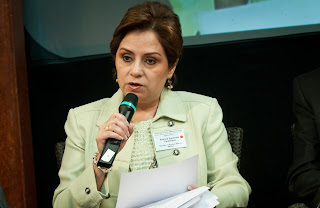 The second announcement that was pending is who would head the UNFCCC? The answer it seems is that of Former Mexican Foreign Minister Patricia Espinosa She will take up the role as the new Executive Secretary of the United Nations Framework Convention on Climate Change (UNFCCC). UN Secretary-General Ban Ki-moon will now need approval by the 11 member U.N. bureau of the UNFCCC. This was reported today by Alister Doyle of Reuters.

She was favorite once Erik Solheim was proposed by the Secretary General for Executive Director of UNEP.

She will replace Christiana Figueres, a Costa Rican who took over the UNFCCC after the disastrous Copenhagen Climate Summit and steered countries to the agreement in December last year in Paris.

Espinosa is at present the Mexican Ambassador to Germany and has played an important and very well respected role in the climate negotiations.

The present Paris Agreement still needs delivering and more commitments will be required in the coming years as countries will try and align with a 1.5C rise scenario. She will have some tough years ahead.

With such good African candidates for both UNEP and UNFCCC not chosen the smart money is on UN Habitat new head coming from Africa.

Meanwhile I and I am sure all of us will wish Patricia and Erik our best wishes and support as they start to take over the helms of UNFCCC and UNEP.