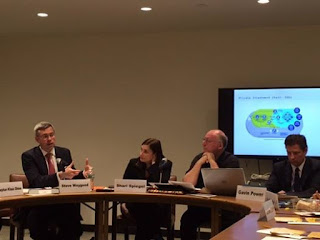 Last week was a great week for the UN on 22 April 2016, 175 Parties to the United Nations Convention on Climate Change (UNFCCC) signed the Paris Agreement. 15 Parties ratified it. The world’s largest emitters, the United States and China were among the signatories (together they represent approximately 38% of greenhouse gas emissions). This multilateral treaty broke the record of member states signing on the first available day (Associated Press, 2016). The Paris Agreement will enter into force when it’s ratified by 55 countries, representing at least 55% of global emissions. After the success of the 22 April event, the Paris Agreement will hopefully enter into force earlier than anticipated.

Also last week on the 21st the PGA held a High-level thematic debate on achieving the sustainable development goals. debate focussed on the key enablers for sustainable development – finance, technology, data and partnerships – and, in particular, on the kind of actions that are needed to unlock the resources needed to attain the goals.
A key theme throughout was the need for different actors to work better together.


“Effective partnerships can create coalitions of willing actors that can share and diffuse knowledge, costs and expertise. And they can open new markets and prepare the ground for innovative and strategic developments,”

Mr Lykketoft said. “Much of this, however, depends on the engagement of a diverse range of actors, which requires, amongst others, that we overcome challenges relating to trust and understanding between those actors.”

A large number of private investors and companies participated in the one-day event and outlined the kind of contributions they are making to enable implementation. Many, for example, said that they were ready to finance green investment but they called for regulatory frameworks that make such investments more financially attractive than traditional investment opportunities.
I co-chair two events one in the Financing for Development Forum and the other a policy room in the PGA event with Shari Spiegel Chief from the FfD Office.
The meetings looked at changes that would be needed in company behaviour – e.g. PRI and ESG reporting and long-term investing - to achieve the Addis Ababa 2030 Agenda and the SDGs.
Steve Waygood of AVIVA said "Not delivering them would be the world's most significant market failure."
The question is how to incentivize the private sector to re-allocate the tens of trillions of dollars invested in capital markets. It also looked at gaps in the system and better benchmarking of data,