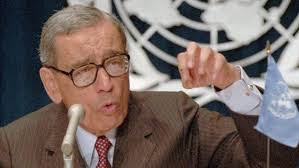 Boutros Boutros-Ghali (14 November 1922 – 16 February 2016) was an Egyptian politician and diplomat who became the sixth Secretary-General of the United Nations (UN) from January 1992 to December 1996.  Prior to that he had been Vice Foreign Minister of Egypt,

Boutros Boutros-Ghali oversaw the UN  during the Earth Summit in 1992  which agreed Agenda 21, the Rio Declaration, two conventions on Biological Diversity and Climate Change and the Forest Principles.

At the Earth Summit he said that "the route is now marked out," Secretary General Boutros Boutros-Ghali said in a blunt farewell to an audience that included several of the 118 heads of state and government who had journeyed here. "Today we have agreed to hold to present levels the pollution we are guilty of. One day we will have to do better -- clean up the planet."

During his term he would have to deal with  several world crises. This included the break-up of Yugoslavia and the Rwandan Genocide.

In 1996, ten Security Council members,sponsored a resolution backing Boutros-Ghali for a second five-year term, until the year 2001. The  United States led the opposition and vetoed a second term for him. The US opposition had been due to his reluctance on approving NATO bombing in Bosnia (something that Kofi Annan supported).

After leaving office he became the first Secretary-General of the Organisation internationale de la Francophonie from November 1997 to December 2002. He also served as the chair of the South Centre from 2003 to 2006. In 2003, Boutros-Ghali was appointed Director of the Egyptian National Council of Human Rights, which he remained until 2012

Finally another word from the Earth Summit by UN secretary-general, Boutros Boutros-Ghali, she aid people could continue to waste the planet's resources for a few more decades. 'But ultimately if we do nothing, then the storm will break on the heads of future generations. For them it will be too late.' 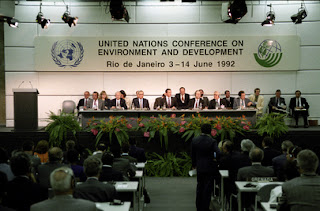 The 1990s became the lost decade as development aid fell and only returned to 1992 levels by the World Summit on Sustainable Development in 2002. We are now reaping the words that the secretary general said in 1992.
Boutros Boutros-Ghali