New book out: Global Population Health and Well-being in the 21st Century: Toward New Paradigms, Policy, and Practice 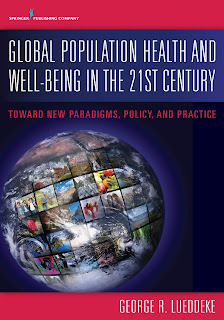 “ This is is a remarkable, much-needed book that fills a significant gap in the health and social care
literature in the early decades of the 21st century—public, global, clinical, ecological. It is powerful,
ambitious, comprehensive, and sweeping at the same time that it is visionary, focused, and deep. Its
power and passion are about the potential of population health and well-being optimally applied
around the globe to help in creating a world that is healthier, safer, more just, and more sustainable.”
Barbara K. Rimer, DrPH, Alumni Distinguished Professor and Dean, UNC Gillings School of Global Public Health, University of North Carolina at Chapel Hill (From the Foreword)

“ Covering the most crucial topics related to global population health in the early 21st century, this book is focused, insightful, practical, and capable of making a significant difference in this field. It is grounded in the present and built on the future. It offers great opportunities for readers to learn, think, and/or practice on how the well-being of the human species can reach a higher level through population-centered, integrative, and accountable health systems.”
— Qingyue Meng, MD, PhD, Dean, School of Public Health, Peking University,
Executive Director, China Center for Health Development Studies, China

Drawing on current research and the expertise of world recognized leaders in public, global, clinical, and social health in both developed and developing nations, this book delivers an evidence-based examination of 21st-century challenges in global population health and well-being. In this new text,
Dr. Lueddeke, author of Transforming Medical Education for the 21st Century, builds upon the findings of the seminal Lancet Commission report Health Professionals for a New Century: Transforming Education to Strengthen Health Systems in an Interdependent World and brings to light such critical global challenges as cardiovascular diseases, obesity/diabetes, mental health, and poverty. Dr. Lueddeke employs nuanced understanding and depth of knowledge to examine a full range of major population health concerns including global health inequities, climate change, social intolerance, and the impact of war-inflicted violence on people’s lives.

With special attention given to major initiatives of the United Nations, especially its Sustainable Development Goals (SDGs) 2016–2030, the World Health Organization (WHO), and the World Bank priorities, the text articulates an imperative to adopt a “One World, One Health” view that recognizes the interdependence of humans, animals, plants, and the environment. In a world facing extreme geopolitical, economic, and social tensions, Dr. Lueddeke fervently argues for a paradigm shif with regard to our worldview and global re-orientations encompassing population distribution, burden of disease, health care support and workforce development to sustain the planet in this decade and beyond, thereby helping to achieve the UN 2030 Agenda for Sustainable Development.

The book is replete with exemplary case examples of public health organizations’ contemporary approaches to public health practice worldwide, vivid accounts of the health challenges children face
in six distinct nations, and insights from leaders in the field. supported by “ h wave” thinking and practice. In terms of health care, it strongly advocates the need to transition from a “sickness”
to a “wellness” culture by, among other things, strengthening collaboration between primary care and public health.

Intended for undergraduate and postgraduate courses in global public health, it will also be a  welcome addition to the libraries of practitioners and policy-makers at all levels in the public/population/global health continuum.

Key content areas include:
The book can be bought here.