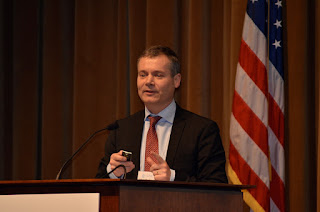 The Paris Agreement has given us huge momentum for building a resource-efficient, low-carbon and resilient global economy. Now it’s time to realize that vision, the SEI director writes.
Note: This blogpost is translated and adapted from a post that first appeared in Swedish on the Hagainitiativet blog.

This is it! When the gavel came down at the Paris Climate Change Conference, and the cheers broke out, the enthusiasm was contagious. After years of negotiations, 196 countries had reached an agreement that did not settle for the lowest common denominator, but actually set quite an ambitious agenda for tackling one of our greatest environmental and development challenges: climate change.
The Paris Agreement frames climate action in the context of sustainable development and poverty eradication, reflecting a fundamental shift in how we think about the climate. This is no longer “just” an environmental issue – it is about building a future in which all the world’s people have a chance to thrive. Climate change poses a threat to the livelihoods and well-being of millions, if not billions, so we must sharply reduce emissions and build resilience. At the same time, we need to ensure future prosperity by building economies that are low-carbon, resource-efficient, and environmentally sound.
To achieve these twin goals, we will need to transform energy and transport systems; make our cities more compact, connected and efficient; and combine the best of modern agricultural technology and traditional practices to boost productivity while protecting ecosystems and reducing emissions. We need to ensure a just transition for the workers and communities who now depend on high-carbon industries, and create new work and development opportunities worldwide. The challenge of achieving all this at once is what makes the climate negotiations so complex, but also so important and exciting!

The mood six years ago, at the end of the Copenhagen climate summit, was very different. The situation felt chaotic, and many of us were frustrated that the multilateral system had failed to produce a strong successor to the Kyoto Protocol. But in hindsight, it is clear that Copenhagen was less a failure than a necessity to lay a foundation for what we now see as a success in Paris.
Already in Copenhagen, it was clear that the world was changing rapidly. The clear division between “developed” and “developing” countries established in the climate convention and the Kyoto Protocol no longer matched global realities. Emerging economies had become major emitters, and any climate agreement that focused only on developed countries would be increasingly ineffective. The geopolitics situation had also changed, with emerging and developing countries demanding a stronger voice in the process. At the same time, science was highlighting the need for a complete transformation of our economies. Low-carbon technologies would advance rapidly in the years to come, but right then, the challenge seemed daunting. The Copenhagen Accord fell far short of expectations.

Still, Copenhagen gave us key building blocks for the process that would lead to the Paris Agreement. Countries agreed to aim to keep global warming below 2°C. Developed countries committed themselves to mobilizing US$100 billion per year in climate finance for developing countries. And along with rich countries, poorer countries were invited to make mitigation pledges.
Paris builds on that foundation and takes it to the next level. Instead of the 2°C target, we are now to aim to stay “well below” 2°C well and pursue efforts to keep warming below 1.5°C – a much safer level, particularly for small islands and other low-lying areas, but also for the polar sea ice and the stability of glaciers and ice sheets. Achieving this goal will be hard, but its adoption shows countries now see low-carbon pathways as viable and full of opportunities, not least due to very rapid technological development.

We also have an agreement that includes all countries, through a smart system of national plans developed by countries, tailored to their own circumstances. We have a process in place where countries’ commitments and resulting efforts will be reported transparently, and where ambition can only rise over time, as countries get financially stronger and better technical solutions become available. We have an agreement which makes it clear that even climate adaptation has global dimensions and requires international cooperation. The US$100 billion climate finance commitment has been defined as a “floor”, to be increased by 2025. Of course, much remains to be done and elaborated in coming years, but a solid foundation for action has been laid. This it is a victory for the multilateral system.

The Paris Agreement is also good for business. Indeed, it was encouraging to see how corporate leaders contributed to the discussions leading up to and during the COP. Instead of blocking or slowing down climate action, as they often have in the past, many corporations are now pushing the agenda and demanding clear, strong policies. The Paris Agreement is an important step in that direction. There is now a politically defined global objective that will form a better basis for the development of legal and financial instruments to support development and investments. The national plans can be seen as broader development plans, and thus as the basis for clearer national objectives in terms of investments and restructuring the economy. This will create new business opportunities.
Yes, some business priorities have yet to be realized – most notably, putting a price on carbon, and creating clear regulatory frameworks consistent with a low-carbon transition. The business community, from individual companies to national and international business organizations, must continue to push the agenda and be proactive, constructive partners in the work that still lies ahead. Now is a good opportunity to set clear objectives and targets for fossil fuel-free operations or “net zero” climate impact. If all businesses do this, it will be an immense step in the right direction.
The Paris Agreement has given us huge momentum for building a resource-efficient, low-carbon and resilient global economy. Now it’s time to realize that vision.