Some initial thoughts on the Final Declaration Draft

By Friday there should be an agreement and lots of hugs, I understand, all round. Between now and then though there is some tough negotiations to be undertaken.

have to admit I didn't stay up to wait for ‘final draft’ of the Declaration to come out. I had spent part of Sunday evening at a 'Make A Wish' concert at the Bitter End rock venue in West Village. 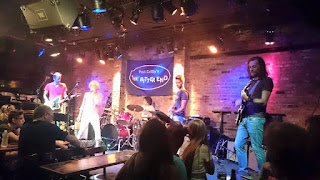 So we are now down to the real negotiations. After my morning in the Vienna Cafe this is some of the areas I believe will cause some discussion and negotiations this week.

The preamble has grown somewhat and has become more of a laundry list under the 5 Ps (Planet, People, Prosperity, Peace and Partnership) by doing so I think misses the point of the preamble and I don’t think what we have now under the 5 Ps adds anything.

The most important part of the Declaration are the Goals and Targets. On Friday the final statement by South Africa on behalf of G77 and China looked like the x and ys would be dealt with. Helpfully the latest draft separates the targets that need to be dealt with. the Outstanding will be 14c which deals with the need to align it with UNCLOS. This may have some residue conversation but its looking good and is ultimately the substance to the Declaration.

Now let’s look at the main areas of disagreement:

Common But Differentiated Responsibility (CBDR): The issue here is should CBDR apply to all SDGs. I have consistently supported the G77 position here because there is selected memory by the developed countries. Agenda 21 dealt with most of the goals we now have except Goal 16 on Promote peaceful and inclusive socialites for sustainable development, provide access to justice for all and build effective, accountable and inclusive institutions at all levels and Goal 10 on reduce inequality within and among countries. The developed countries ‘shared responsibility’ does not recognize the historical nature of where we are now and the responsibility of developed countries for that. When the chapters of Agenda 21 were undertaken in the 1990s they were done with a CBDR perspective.

The family – do we recognize the huge diversity that the family term now represents or should it be restrictive. I hope we embrace the diversity of what is now the families that we all live in. This may go to the wire.

Human Rights language this is likely to continue to be an area of controversy – why mention some rights and not others. The right to development, the right to food and water -- what should be included and what should be excluded? I support the inclusion of the three.

Technology Facilitation Mechanism another of the successes out of Rio+20 – set in motion and steered by the Ambassadors of Brazil and Switzerland. It was shifted over to the FfD track. In my opinion to have some useful outcome from FfD. The question now is does it get reintegrated into the Declaration. The developing countries say yes the developed countries say why this and not the whole of the FfD outcome. I personally think that it should be integrated into the Declaration as it was part of the discussion in the SDG OWG and early part of the 2015 negotiations.  I like it as its represented in the text at the moment it shows what was agreed and what the process forward is.

Global Sustainable Development Report I didn’t expect there to be a discussion on this but am really pleased that there is. This report COULD play a similar role to the Human Development Report of UNDP or the Global Environmental Report of UNEP.  At present it is not funded anywhere to the level it needs to be done to. The discussion is around should it be yearly or every 4 years when Heads of State meet. This is a critical report and should be supported effectively to show the state of SDG implementation.

The document still is intellectually inconsistent in the terms it uses and when it uses them relating to /Major groups/Stakeholders/civil society/non state actors. This is not helped by the reality that many stakeholders themselves don't know what they mean.  There are huge impacts of the misuse of these terms to who then is engaged in the process. For Major Groups it was clear nine named sectors of society which governments were obligated to speak to in the follow up to the 1992 Agenda 21 implementation. The term civil society leaves it amorphous and leaves it up to governments or the UN to decide.   For Financing for Development the decision to just have civil society and business and industry meant there was no place for local government or academics for example. This in particular is true of the language in the national follow up "Such reviews should draw on contributions from civil society, the private sector and other actors." it should say: "draw on contributions from civil society, the private sector and all other stakeholders."

It would have been nice to see a commitment to the stetting up of a multi-stakeholder platform by governments to help in the implementation and national review of the SDGs.

There is still a discussion around how to reconcile the issue of universality and national priorities. Also national v global indicators this though should be dealt with work of the Inter-agency and Expert Group on Sustainable Development Goal Indicators (IAEG-SDGs) on indicators. I like the idea that there would be a set of global indicators maybe two per target and that national and stakeholder indicators would be part of a compendium. The IAEG-SDG is to be with us for  the next ten years.
Reporting
Reporting will be voluntary but how do we deal with peer group learning regionally or globally or both? I would hope both the Africa Peer Group Review Mechanism shows the strength of a regional approach.

On the issue of partnerships this should be dealt with in ECOSOC - after September and their should be a review of the only UN agreement on partnerships the UN Commission on Sustainable Development 11 (2003).  We don't need a 1000 flowers bloom but a focused approach to partnerships. One partnership per target would be a great way to bring resources, people and action together. A proper system of how the private sector engages in partnerships will be critical. I would suggest that the UN assigns the task of managing each of the goals to the relevant UN Agencies and Programme and oversees the partnerships for each of the targets under the relevant goals.  This will enable a monitoring through the relevant UN Agency or Programme as well as through the Partnership Forum in EcoSoc. to help this perhaps the following bold words could be inserted in.


80. The HLPF, under the auspices of ECOSOC, shall carry out regular reviews, in line with Resolution 67/290. Reviews will be voluntary, while encouraging reporting, and include developed and developing countries as well as relevant UN entities and other stakeholders, including civil society and the private sector. They shall be state-led, involving ministerial and other relevant high-level participants. They shall provide a platform for partnerships, utilising existing fora, as appropriate, and ensuring the participation of major groups and other relevant stakeholders.

There are many small wording changes that is now in the document "addressing growing anti-microbial resistance" it didn't make it into the targets last year but two major reports have since then come out one by WHO which makes it a major issue the world will need to deal with. This is great news.

The UN system is not fit for purpose to deliver this agenda so there will have to be a UN GA resolution to start to deal with the consequences of the outcome from September for UN Commissions, Agencies and Programme as well as for ECOSOC. There is no time to do that this week or enough brain space – though there may be suggestions reflected in the text probably around asking the UN SG to produce a report for discussion on the subject.

There is also a little strange wording in para 9 on 'A world which cherishes its children' perhaps invests in its children might be better.  Cherish on the other hand was one of my favouite David Cassidy songs

So much to do this week and so little time.
declaration felix dodds post 2015 Rio+20 SDgs