An interesting week so far: SDG, targets and Indicators

March 26, 2015
Indicators
The worry that some people had over indicators being used to re-open the targets and goals seems to have been allayed.The approach will be as we have highlighted here in previous posts. The Statistical Commission will establish the Inter-agency and Expert Group on Sustainable Development Goal (SDG) Indicators (IAEG-SDGs) will now be set up and will develop the framework for the Indicators and agree the indicators. This will be a technical  input to the agreed targets. The survey conducted of around half the member states which i mentioned in a  previous blog was quiet rightly shelved. I am continually pleased by the way that the UN Statistical Division is doing their work. Finally the outcome in march 2016 of the Statistical Commission will still have to go to UN ECOSOC and finally to the UN General Assembly in December 2016. 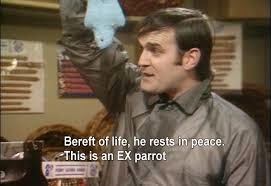 I have to say that while I was watching the session yesterday on the Goals and Targets and listening to the UK speaking it kind of reminded me of the Monty Python Dead Parrot sketch with the UK playing the owner (no the document has less goals) and  nearly everyone else playing the buyer (we agreed that there was 17 goals and 169 targets already) then please watch:


Today we heard a range of views on what to do about the 19 targets that were suggested for review.

To remind readers they fall into two groups.

The first is where there are x or ys - my advise had been that they should have just dealt with them first...but they decided to deal with the 19 as a whole. The second group is a set of redrafts that were done by the UN to align certain targets with existing targets agreed in other fora.

Some of the worries that have been expressed by G77 is that this technical proofing is opening the door for substantive changes. But before commenting on this the main criticisms have been:
1. Why didn't the UN system do this before the SDGs were agreed?
2. Why wasn't the criteria for technical proofing agreed at the January or February sessions?
3. Why these 19 and not others?

As the discussion continued it was clear from a number of developed countries: Iceland, Australia, UK and the US in particular that any review should be more broad than the 19 suggested. The US seemed to identify 32 targets it wanted to address. Iceland seemed to want to reopen some of the more controversial targets

Instead of using today to deal with the x and ys it may be that we get nothing out of this session and the discussion will be kicked down the road and also contribute to a reduction of trust in the process.

Switzerland had made an interesting suggestion which would have required all countries to agree to open a target if a target was to be reopened and if not it would stay as it is at the moment. As the meeting moved to the end of the morning session the chances for a review becoming more and more unlikely.

I would again suggest focus on the x and ys. This now will not be finished this time but starting now would be important.
felix dodds Iceland indicators SDG UK USA