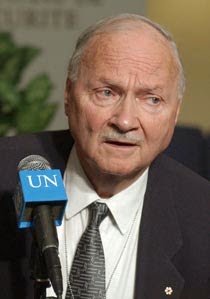 I am very sorry I could not be with you today in person.  My age conspires to make it difficult to continue racing around the world to significant events, however much I would like to.  It serves as a constant reminder to me of the frailty of human beings, and a metaphor for the vulnerability of systems we once assumed were entirely secure. That age and my experience does, however, provide me the advantage of being able to review some of the political history that often goes unwritten, and to provide some diplomatic – and perhaps undiplomatic – perspective on the current status of the process you all are addressing.

First let me say how pleased I am to be speaking at the President of the UN General Assemblies Stocktaking event. I would like to thank Ambassador Ashe for giving me this opportunity to comment on the path we are all on towards a more sustainable, fair and equitable world.
It has now been over 42 years from the Stockholm Conference and 22 years from the 1992 Earth Summit. There have been immense changes in the world over those years some of what was agreed has been implemented but much has not.

Thanks to the excellent work by the scientists on the IPCC and those led by Johan Rockstrom we now must respect the planetary boundaries. I have always endeavored to build agendas based on solid science and now I realize that this is not enough.
As science progresses and the planetary predictions become clearer then what we see is those who disagree find someone to go on News and tell the world it’s not true. The World Bank tells us that now 97% of climate scientists say climate change is happening. Then a Fair and Balanced approach would be to be at the forefront of policies that address climate change. Why are we still discussing it as opposed to acting?
We need in Paris next year a strong climate agreement but I worry that will not be possible because of the political reality here in the United States. There hasn’t been an environment treaty ratified by the US Senate since the Framework Convention on Climate Change.

No issue is more important to our human future than that of climate change in which the political will to act cooperatively and decisively has dangerously diminished.

Indeed, it has never been more important to heed the evidence of science that time is running out on our ability to manage successfully our impacts on the Earth’s environmental, biodiversity, resource and life-support systems on which human life as we know it depends. We must rise above the lesser concerns that preempt our attention and respond to the reality that the future of human life on Earth depends on what we do or fail to do in this generation. The time has come for action.

Rio+20 confirmed UNEP as the voice for the world’s environment. As the first Executive Director I am pleased with what it has done in the last 40 years, in particular it has helped to create the multilateral environmental agreements that were needed.

The Earth Summit in 1992 set up the Commission on Sustainable Development and after a successful start it was clear we needed something at a higher level. I argued in 1992 and again in 2012 that should be a reform of the Trusteeship Council which has fulfilled its original purposes and could become the forum in which member states exercise their trusteeship for the global environment, the commons and the Earth’s life-support systems.
But Rio+20 decided to set up instead the High Level Political Forum (HLPF) to be the preeminent forum within the broader UN family to coordinate, facilitate, review and create policy on the Post 2015 Development Agenda. It must be the home of the Sustainable Development Goals, and the place to identify emerging issues and set agendas. The HLPF has been charged with a heavy agenda, and needs to be an independent and strong position within the UN. It at present lacks a Bureau, and a functioning secretariat. The challenges of the next 15 years are daunting. In 2030 the next generation will ask if these challenges we faced did lead to us to creating the means of addressing them. The time has come for action.

Before Rio+20 I had suggested the establishment of an investment instrument in the form of “Earth Bonds” to be purchased by private sector foundations, funds and individuals, for investment in sustainable development projects, principally in developing countries. The Green Bond market is at 25bn for the year is now growing fast. The World Bank’s initiative in issuing Green Bonds to finance climate change projects provides a useful precedent. The World Bank and/or its private sector affiliate the International Finance Corporation could also be the issuers of the Earth Bonds. They and the regional development banks could initiate and manage projects funded by the Earth Bonds.
Rio+20 set up a Committee to look promote Sustainable Development Finance. I was hoping to see not only a commitment to sustainable development finance but a timetable for the necessary action. There have been many reports about what is needed now what we need to do is put these into action.

I am pleased to see the report addressing Capital Markets which must play a significant role in financing sustainable development. Private capital can be made available in amounts exceeding official development aid but only with a conducive regulatory framework can we foster this process.
I commend the finance companies in coalition with NGOs that have been pressing all companies listed on stock exchanges to report on their sustainability.  The time has come for action.

The most important outcome from Rio+20 was the agreement to develop Sustainable Development Goals which would apply to all countries. The development of the SDGs has been a real participatory process which I commend those who have led this process.

We all owe a deep debt of gratitude to the governments of Columbia and Guatemala for leading this process and also to the Co-chairs of the SDG OWG Ambassador Macharia Kamau and Ambassador Csaba Kőrösi for shepherding the process to where we are now.

But I want to be very clear that what we have at this point should be seen as a floor and not a ceiling of ambition.

It is a good start but much more work must be done to ensure when Heads of State address these issues that they will be well informed and that they agree to a set of transformative Sustainable Development Goals. Goals and targets that will address the planetary boundaries we are facing, built on a firm social foundation that address inequalities and one that looks to address early the nexus of water-energy-food that will define the type of world we live in in 2030. The security and sustainability of life on Earth depends on what you do.

Many of you will play a significant role in what will be achieved or not. We live in a time of great challenges on so many fronts that sometimes the issues we talk about today are lost in the noise of war and peace. But there are also great opportunities with building an inclusive and green economy that will bring jobs and a cleaner and more sustainable planet.

The roadmap that started in Stockholm, continued in Rio and Johannesburg and in Rio-20 must now become a reality. Our essential unity as peoples of the Earth must transcend the differences and difficulties which still divide us. We are called upon to rise to your historic responsibilities as custodians of the planet in taking the decisions that will unite rich and poor, North, South, East and West, in a new global partnership to ensure our common future. I ask you all to join in making it happen.