This book is written by participants involved in the Rio+20 negotiations, it presents a unique insider analysis of not only what happened and why. It also identifies where the outcomes might impact in the future, particularly in the UN development agenda beyond 2015. 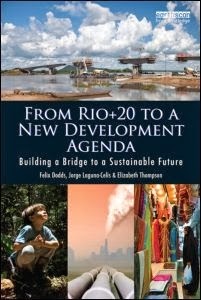 The book throws light on the changing nature of multilateralism and questions frequent assumptions on how policy is defined within the UN. It shows that Rio+20 was more than an international meeting; it represented a culminating point of decades of successes and failures and a watershed moment for seminal concepts, ideas and partnerships including the Green Economy, zero tolerance on land degradation, the introduction of Sustainable Development Goals, the creation of national measurements of consumption, production and well-being that are intended to go beyond GDP, the introduction of national green accounting and the commitment of billions of dollars for sustainable development partnerships, including Sustainable Energy for All.

Quotes on the book:
"There are many who are only too happy to dismiss multilateral negotiations because of their painfully slow progress and bizarre esoteric practices. Sections of the media feel cliché bound to portray them as a junket circuit for politicians and officials, and delight in calling them a waste of time and money. And it is undoubtedly the case that drive, passion, ideas and excitement is much more obvious in the myriad of grassroots peoples’ movements around the world campaigning for change; in the dynamic partnerships between forward thinking cities and regions; and in the innovative approaches that thousands of communities and some leading companies are taking to address the challenges and opportunities of sustainable development. But if these thousands of actions aiming to create a better world are to come together in a way that enables humanity to prosper fairly within environmental limits, we need to keep our faith in a vision of multilateralism where the world’s countries, slowly but surely, build the common frameworks that are needed to deliver genuine sustainable development. This book does an excellent job of documenting the journey to the Rio+20, the details and outcomes of the summit negotiations, and critically what needs to happen in the years ahead. It makes sense of where we have got to on this long journey, and where we need to go next. Nothing could be more important."– Craig Bennett, Director of Policy and Campaigns, Friends of the Earth (England, Wales and Northern Ireland)

"Long-term sustainability solutions can only be brokered at the international level – and a huge amount of energy and expertise has gone into those international agendas since 1972. Through the Stakeholder Forum, Felix Dodds has been at the heart of that global diplomacy for more than 20 years, allowing him and his co-authors, Liz Thompson and Jorge Laguna Celis to draw on that wealth of experience and theirs in order to map out a robust and inspiring road map for a better world." – Jonathon Porritt, Founder Director, Forum for the Future and former Chair of Stakeholder Forum

"This is the ultimate ‘insider’s guide’ to the Rio+20 process, taking the reader from the preliminary discussions back in 2007 all the way through the conference itself and into the future. In tabloid terminology, Felix Dodds, Jorge Laguna Celis and Liz Thompson give us ‘the thrills, the spills, the personalities and power-plays’ that shaped the summit and its diverse outcome. Whether you regard the outcome as primarily a missed opportunity due to its fundamental incompatibility with respect for planetary boundaries and its failure to match President Lula’s pre-conference vision of an event that would lead to ‘a new and more balanced distribution of wealth’ in the world, as I continue to do, or whether you share the authors’ optimism regarding the re-moulding of international institutions and the voluntary commitments secured in Rio, this book will give you a deeper and broader understanding of why Rio reached the outcomes it did. And as it makes clear, there is still much to play for, particularly in regard of the sustainable development goals, which could yet provide impetus for a global move towards the future we both want and need." – Richard Black, former BBC Environment Correspondent

"Multilateral negotiations are very complex. Issues such as peace and security, sustainable development and climate change have all proven how difficult it is to negotiate to consensus amongst the global family of nations. The Rio+20 Conference on Sustainable Development ushered in new policy and institutional approaches for achieving sustainable development. The three authors of this book represent the various stakeholders in the multilateral negotiation process – countries, civil society and the UN system. The authors are uniquely positioned to offer readers a better insight into how a consensus in multilateral negotiations emerge, the result of Rio+20 and the evolving global development agenda." – H.E. Dr. John W. Ashe, Co-Chairman, Rio+20 Preparatory Committee, Permanent Representative of Antigua and Barbuda to the United Nations

"The Earth Summit of 1992 was a pivotal event in multilateralism; it set the world on a journey to sustainable development. In 2012 the world’s governments returned to Rio to rechart that path in the light of past successes and failures and the new challenges which lay ahead. In this book, three development practitioners conduct an interdisciplinary assessment of the outcome document of the Rio+20 Conference on Sustainable Development, 'The Future We Want' and the post-2015 development agenda. It is a refreshing and timely contribution to the body of development literature." – Sir Shridath Ramphal, former Commonwealth Secretary-General

"This book is a decisive contribution to a better understanding of the Rio+20 negotiations which in many ways were the genesis of the Post-2015 process. The negotiations were dauntingly complex given the range of issues covered, and this book is both timely and seminal as it will enable those who did not participate in the process, for the first time, to fully appreciate the scope of the negotiations. This will be a vital referent for the discussions under the Post-2015 process which need to be widely participatory. This book will contribute to facilitating informed and substantive participation by a wide range of stakeholders."– Paula Caballero Gomez, Director, Ministry of Foreign Affairs, Colombia

"The landscape of geopolitics is rapidly changing, as is our view of how we can live and prosper within the planet’s boundaries while attaining sustainable global development. Dodds, Celis and Thompson have captured the nuances of these changes and challenges, presenting them in a way that enhances our understanding of the major development issues of our time and the response of the multilateral system to those issues." – Dame Billie Miller, former Deputy Prime Minister, Minister of Foreign Affairs and Trade of Barbados

"Out of respect for our children we as politicians must show will and courage to embark on a new course towards turning the unsustainable use of natural resources around. It is my hope we will succeed in setting ambitious global sustainability goals in the UN in 2015 to continue the hard work done at Rio+20. This book highlights that it is not about changing gears. It is about changing lanes." – Ida Auken, Minister of Environment, Denmark

"This is an invaluable contribution to the on-going conversation on the future of our planets and its present and future inhabitants. The ideas for action are anchored in an erudite appraisal of the results of the Rio+20 summit and deserve careful consideration by policy makers, advocacy groups and concerned citizens." – Shafqat Kakakhel, former Deputy Director of UNEP

"This book is an animated, engaging and well documented tour through the recent history of development, culminating in Rio+20 and its declaration. But it goes beyond history and points a path for achieving the kind of development that human beings long for and how we must plan for it. This is probably the greatest challenge of our time and this book gives us hope that we are up to it." – Sir George Alleyne, Director Emeritus, PanAmerican Health Organization, Chancellor of the University of the West Indies

Felix Dodds is a Fellow at the Global Research Institute at the University of North Carolina an Associate Fellow at the Tellus Institute. He was the former Executive Director of the Stakeholder Forum for a Sustainable Future, (1992-2012) one of the leading sustainable development organizations working around the United Nations.  He is on the board of Advisors for the Collaborative Institute for Oceans, Climate and Security, Asia European Foundation ENVforum Steering Committee and the Great Transition.

Jorge Laguna-Celis is the Senior Advisor on sustainable development to the President of the UN General Assembly; prior to that he was a negotiator and expert on international environmental governance and sustainable development. Since 2006 he has been a member of the Mexican Foreign Service and is based in New York, USA.

Liz Thompson is a former Minister of Energy and Environment of Barbados. She was honoured by UNEP in 2008 with the prestigious "Champion of the Earth" award for her work in climate change and environment. She was one of two executive coordinators appointed by the UN at the level of Assistant Secretary General to support the Rio+20 process and negotiations. As a Minister she led the development of national policies on the green economy, energy, environment and sustainable development. She now works in these areas on which she has been an advisor to the Executive Office of the UN Secretary General, UNDP and the 68th President of the UN General Assembly.
Earth Summit 2012 felix dodds jorge Laguna celis liz thompson Rio+20 SDG sustainable development Sustainable Development goals