February 21, 2013
The by-election for Chris Hulme's seat Eastleigh looks like being one that could benefit from that great BBC correspondent Vincent Hanna (RIP) as Martin Kettle mentions in the Guardian today.

For those who do not know the great man he was Newsnight's by-election specialist in the 1980's--  few escaped from his tough questioning. He was one of those larger than life characters.

Vincent was a Northern Ireland Catholic born in Belfast and married to the daughter of Gerry Fitt the founder and first leader of the Social Democratic and Labour Party in Northern Ireland. He started his journalist career reporting on the civil rights movement in Northern Ireland. It is perhaps less well known now that many catholic's did not have the vote in Northern Ireland until the 1970s. The right to vote was linked to being a registered householder. To get a job or public housing in those days you had to answer on an application form what religion you were. 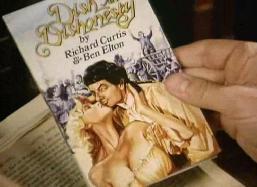 Vincent was made immortal in an episode of Blackadder the Third where he was a guest covering the by-election of a Mr S.Baldrick in the rotten borough of Dunny-on-the-Wold in the episode Dish and Dishonesty. One of my favourite episodes, I can not do justice to explaining the episode but it is well done on Wikipedia . But here is the result of the....

Vincent was a central part of the political landscape of the 1980's after Newsnight he went  on to create 'A Week in Politics' for Channel 4 and presented it until his death in 1987.

My fondest memory of Vincent other than press conferences at different by-elections, or discussing politics at the bar into the late night at Liberal Party Conferences, was travelling up to the 1985 Liberal Conference in Dundee. This was on a wonderful train just renamed the 'David Lloyd George' by the incoming President of the Party David Penhaligon MP (who himself was to die tragically on the 22nd of December 1986)  at Paddington station as we got on the train. 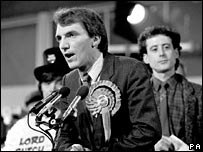 I was then Chair of the National League of Young Liberals and so he sought me and Mike Harskin the NLYL Publicity Vice Chair to organise a media event for the Monday episode of Newsnight. After much discussion we decided to organise a demonstration at the French consulate in protest at sinking of Greenpeace's  Rainbow Warrior The sinking of Rainbow Warrior in July (the operation code named Operation Satanique) was an operation of the French foreign intelligence service (clearly not much intelligence there), the Direction Generale de la Securite Exteneure (DGSD).

We would demand the resignation of the French Defence Minister. To add to the drama we would be led by Des Wilson, possibly then the best known green in the UK (now a poker player), who had been elected President of Party to take up the position the next year in Eastbourne (it is of course another story what happened in Eastbourne at the Defence debate). 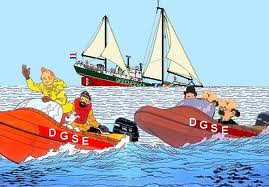 
Newsnight on Monday opened with the Dundee City Hall which looked very much like a Soviet Union government building and with our 100 strong march to the French Consulate. Unfortunately we had not checked out the consulate beforehand, surely a lesson for any campaigner!! 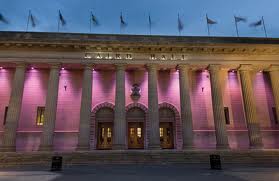 It turned out to be a office of lawyers who looked after French concerns. One of the poor lawyers came down to accept the letter from us. To make it even more authentic we had the letter read out in French.

Over this you heard Vincent say 'You may notice the bemused face of the representative from the French Consulate - this is because he doesn't understand French.' Needless to say within 48 hours the French Defence Minister had resigned.