My new book out on preorder edited with Chris Spence - Heroes of Environmental Diplomacy: Profiles in Courage - Foreword by Inger Anderson 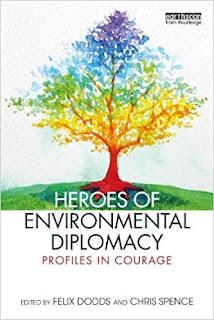 Heroes of Environmental Diplomacy: Profiles in Courage edited by Felix Dodds and Chris Spence is now available on Routledge, Amazon and most onsite bookshops. If you pre-order on Routledge site and use the code FLE22  at checkout you will get an extra 20% off the book. Present retail price is around $27.

"Environmental Heroes in Diplomacy tells an important story.  The individuals chronicled here took on daunting challenges in negotiating global agreements on some of the biggest issues of our times. Through courage and determination, they managed to forge positive action. These stories and their collective message reaffirm one of my core beliefs - multilateral diplomacy, when carried out with vision and persistence, actually works. The efforts and achievements highlighted in these chapters are a clear illustration of three crucial action points for achieving the 2030 Agenda for Sustainable Development. First, every human being, especially our leaders, must be unrelenting in their efforts to do the needful in their sphere of influence.  Secondly, we must never lose hope in the power of the individual to effect transformational change.  Third, we can and must find ways to work together, even when it seems impossible to find common ground, to solve these extremely complex sustainability challenges. Let us heed these lessons that have been gifted to us by these environmental heroes."

Today more than ever, when the world is beset by environmental, social, healthcare and economic challenges, we need courage in our politics, both nationally and globally. This book tells the stories, some for the first time, of twelve individuals who made heroic contributions to protecting our planet through ground-breaking international treaties.

Can individuals change the world? Today, when impersonal forces and new technologies seem to be directing our lives and even our entire planet in ways we cannot control, this question feels more relevant than ever before. This book argues that we can all make a difference.

It tells inspiring stories of individuals who have had a global impact that is beyond dispute, as well as others who have brought about change that is understated or hard to measure, where the scale of the impact will only become clear in years to come. While some are scientists, others are politicians, diplomats, activists, and even businesspeople.

However, they all share the qualities of perseverance, patience, a willingness to innovate or try new approaches, and the endurance to continue over years, even decades, to pursue their goal. Drawing on interviews and the inside stories of those involved, each chapter follows one or more of these heroic individuals, a list which includes Luc Hoffmann, Sidney Holt, Christiana Figueres, Mostafa Tolba, Maurice Strong, Franz Perrez, Maria Luiza Ribeiro Viotti, Raul Oyuela Estrada, Barack Obama and Paula Caballero.

Presenting an uplifting and gripping narrative, this book is an invaluable resource for students, scholars, activists and professionals who are seeking to understand how consensus is reached in these global meetings and how individuals can have a genuine impact on preserving our planet and reinforcing the positive message that global cooperation can actually work.

Chapter 4: Franz Perrez: Putting the ‘Basel’ back into the Basel Convention, by Craig Boljkovac

Chapter 9:  Maria Luiza Viotti: A believer in multilateralism and the power of collective ideas: The Rio+20 Conference, by Izabella Teixeira, André Aranha Corrêa do Lago, and Luiz de Andrade Filho

Chapter 10: Paula Caballero: How It All Began – The Sustainable Development Goals, by Irena Zubcevic

"Tina Turner couldn’t have been more wrong when she sang ‘We don’t need another hero’. As this book shows, humanity has always needed heroes to prevent short-termist, populist and destructive forces holding sway and leading the charge towards environmental ruin. Who will step forward and be the heroes of this decade? Heaven knows they’re sorely needed – and this book shows with both depth and colour what heroism entails and what it brings."
Richard Black, Honorary Research Fellow, Grantham Institute, Imperial College, former BBC Environment Correspondent