IRENA and the challenge for Renewable Energy

I have just returned from the 4th General Assembly of the International Renewable Energies Agency (IRENA) based in Abu Dhabi.

It is the youngest intergovernmental body with now 124 countries as full members and 43 states in accession.
At this Assembly China joined IRENA and attended with a large delegation. China brings substantive weight to IRENA due to being the largest producer of solar energy, the largest installed wind power capacity in the world, they also have something like 20% ethanol in the total automotive fuel consumption not to mention that hydropower also is providing over 210 GW.

China is also the largest producer of CO2 now more than the next two countries combined (USA and India). It is hoping to reduce its production from 70% to closer to 30-50% by 2015. This will require even more investment in renewables and therefore being a strong member of IRENA they hope will help in identifying the best ideas around in the area of renewables.

IRENA had a good Assembly as an intergovernmental organization its budget is going up and the work governments want it to undertake increasing. The present Executive Secretary Adnan Amin has in a very short time made IRENA the organization to go to for work on renewables. They have managed this by building positive relationships with other energy organizations such as the InternationalEnergy Agency, REN 21 and the parts of the UN doing work on energy such as the Secretary Generals Sustainable Energy for All initiative.

Another example of this was the launch of their first ‘Coalition for Action’ to Bolster Public Support for Renewable Energy. The multi-stakeholder coalition made up of IRENA and 35 leading players in renewable energy from around the world. This included such diverse members as Greenpeace, Center for Science and Environment (India), WWF International, companies such as Vestas, First Solar, ENEL Green Power, and Industry Associations such as .
This Coalition will address that while public awareness of the promise of renewable energy is relatively strong, renewable energy developers and investors still need to gain the confidence of local communities and decision makers to ensure support for such projects. 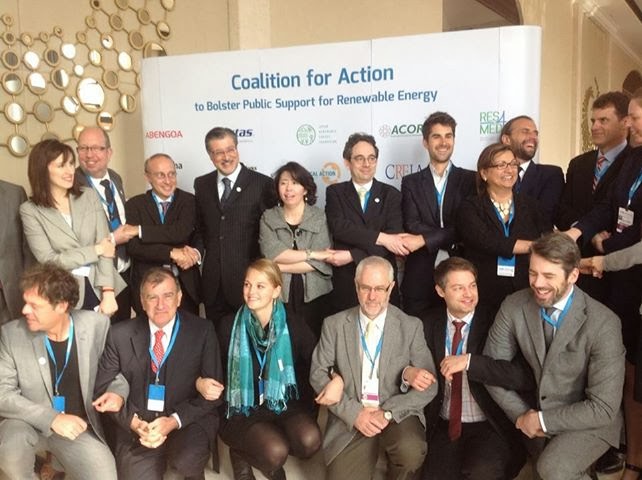 The activities of the Coalition will be:
1.       Knowledge base; Collect renewable energy facts and scientific evidence and provide quality assurance to ensure robust arguments.
2.       Network of communicators: Host a network of communications officers in the renewable energy sector, public agencies and media , and share the ;latest news, information, lessons and training opportunities.
3.       Common communication material: Produce visual and print material promoting renewable energy facts that can be disseminated by all, and
4.       Responding to concerns and misconceptions: Monitor media coverage and coordinate swift, collective responses among members when necessary, along with systematically engaging influential journalists and opinion makers.

The work of IRENA on renewable energy corridors in Africa, Asia and Latin America offer the chance for those countries to jump to new environmentally friendly technology and ones that often are off grid and therefore supporting local energy provision.  As Adnan Amin said in an article for Our Planet in the runup to Rio+20:

IRENA aims to capitalize on experience and foster cooperation at  global, regional and national levels,  sharing knowledge, enabling policies,  enhancing capacity, and encouraging  investment, technological development  and innovation. In the end, renewable  energy is one of the best hopes we  have for achieving a more sustainable  and inclusive future.”