Goodbye 2021 Despite the permanent drama of an intensifying Pandemic, 2021 also underscored the magnitude of our creeping, existential global Climate Crisis.  Weather extremes decimated communities on all continents - crazy floods in Europe and Canada: massive forest fires in the US and Australia: droughts in Africa: Typhoons in the Pacific and Atlantic. And growing numbers of Climate refugees around the world.

COP 26, in November kept Climate on the public agenda. We saw a Glasgow Tourism Declaration & at SUNx we unveiled a Code Red, Plan for our Kids, calling for our sector to go further, faster. It argues for 50% less carbon emissions by 2030: and absolute Zero Greenhouse Gas (GHG) by 2050;  including the more potent methane, sulphur and nitrous compounds. And it’s absolute zero not some vague “net,” kick the can down the 2050 Road. 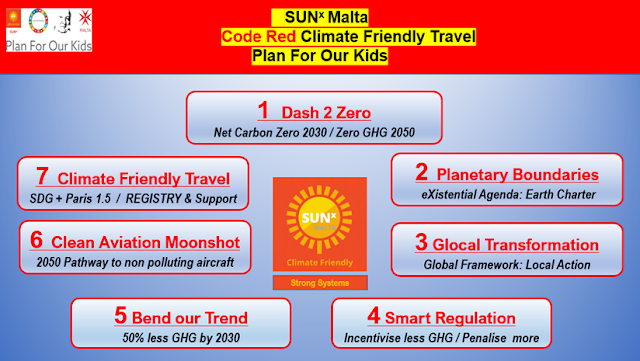 We took this high ambition approach, not to be alarmists but based on science, weather & young climate activists’ reality checks. According to the IEA, despite the massive economic slowdown in 2019 global GHG emissions are still increasing by some 5% a year. We already hit 1.2o of our Paris target after only 5 years. We are headed towards 3o at this rate – which is inhospitable for human and animal life. And this, without any “feedback loops”, like splitting of major Greenland or Antarctic ice sheets and associated, dramatic sea level rises

Hello 2022. We will continue to ring our Code Red Alarm Bell for COP 27 in Egypt in November. An African COP where so many of the world’s Least Developed Countries (LDC’s) are located and where young people make up 60% of the population. To quote Greta Thunberg, “These are the ones who will have to clean up our mess”

To help the Least Developed Countries, generally, we are proposing the establishment of a new Strong Climate Friendly Travel Facility, to support Tourism SMEs in the world’s poorest countries. And specifically to help them build Climate Disaster Resilience, while reducing their Green House Gas Emissions in a Paris 1.5 scenario.

These Base of the Pyramid States, are places where tourism, is a common socio-economic asset. And for them, Tourism is a great product - it doesn’t need export licences; the market comes to the producer: promotion is easy, especially in the Metaverse:: and LDC’s have some of the least spoiled, nature-based tourism opportunities.

Yet Tourism also has a stark vulnerability, that COVID exposed, as borders closed & lockdown decimated travel. For a sector which drives some 10% of the global economy, trade and jobs – up to 50% in many small developing states - the market dried up overnight.   SMEs, who form some 80% of the Tourism Supply Chain, were particularly badly hit. They have few resources to fall back on or insurance cover. They have a priority need for emergency financial relief in the case of systemic natural disasters - such as health, extreme weather, biodiversity collapse etc. – because of the knock-on effect of travel disruption across national and international socio-economic structures. These realities are valid in all countries, & particularly impactful in the 46 LDC’s

We have named the proposed Facility after our inspirational co-founder the late Maurice Strong, one of the fathers of sustainability and climate activism; as well as an early architect of the UN SDG and Paris 1.5 response system. Strong identified LDCs wellbeing, as a special component of the two Earth Summits he organized in Stockholm in 1972 and Rio in 1992.

We see the Strong CFT Facility as an innovative “mixed fund” with both financial & in-kind components, sourced from public & private players in Tourism, Finance & Insurance communities, with special focus on Impact Investment. It can incorporate Government Green Bonds and even Traveller carbon offset funding. It’s certainly not meant to replace traditional government emergency response funding, but rather to complement it and demonstrate that the sector can itself prepare for a tough future in a positive way.

We propose to launch during COP 27, and to spend the year leading up to the COP building its structure with stakeholder input, and looking to gain widespread support for the initiative from inside & outside the Travel & Tourism world.

At SUNx Malta we will kick-start it, by offering 150,000-euro worth of Free Scholarships to a graduate student from each of the 46 LDC’s for our 2022 Climate Friendly Travel Diploma. We are grateful to Malta's Ministry of Tourism and its Tourism Authority, as well as our academic partner ITS (Institute of Tourism Studies) for making this possible. The Diploma trains young graduates to become Climate Friendly Travel Activists to help build national support foundations, to  take advantage of the CFT REGISTRY for Resilience, and our curated Library of good practice tools & research.

Furthermore we will extend the role of the Climate Friendly Travel REGISTRY, to offer special free support for those companies and communities in the 46 LDC’s who sign up to help develop sustainability and climate resilience plans. We also welcome engagement from Organizations signing the Glasgow Declaration as a means to track delivery on their ambitions

Finally, on reflecting on the opportunity presented by COP 27, particularly at this time of the year, it brings to mind the biblical story of Joseph who as Advisor to the Pharaoh, proposed the storing of grain in good years to cover the years when the Nile failed to flood and there was famine across the land of Egypt. Perhaps the first recorded example of the Precautionary Principle. And surely there is no more relevant place than an Egypt COP, for a such a Base of the Pyramid focused innovation.