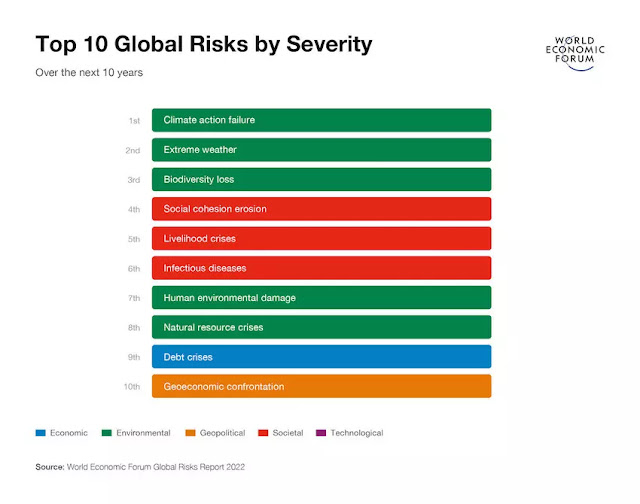 The Global Risks Report 2022, we share the results of the latest Global Risks Perception Survey (GRPS) in the context of the current global outlook, followed by an analysis of growing divergences in the areas of climate transition, cybersecurity, mobility, and outer space. We examine the tensions arising from such divergence, spillover effects, consequences for stakeholders, and shocks that could arise. The report concludes with reflections on resilience, drawing from the lessons of year two of the pandemic. The key findings of the survey and the analysis are below.

• COVID-19 Hindsight: Respondents noted that societal and environmental risks have worsened the most since the start of the pandemic, with “social cohesion erosion” and “livelihood crises” taking the top spots. Other risks identified as having worsened significantly are “debt crises”, “cybersecurity failures”, “digital inequality” and “backlash against science”.

• Outlook and Sentiment: only 11% of respondents thought the world would be characterized by an accelerating global recovery towards 2024, while 89% perceived the short-term outlook to be volatile, fractured, or increasingly catastrophic. Fully 84% of respondents expressed negative feelings about the future—that is, they were “concerned” or “worried”. Pervasive pessimism could create a cycle of disillusionment that makes galvanizing action even more challenging.

• Horizon: “Social cohesion erosion”, “livelihood crises” and “mental health deterioration” are three of the five risks seen as the most concerning threats to the world in the next two years. This societal scarring compounds the challenges of national policy-making, limiting the political capital, focus from leaders, and public support needed to strengthen international cooperation on global challenges. The health of the planet, however, remains a constant concern. Environmental risks—in particular, “extreme weather” and “climate action failure”—appear as top risks in the short-, medium-and long-term outlooks. In the medium term, economic risks such as “debt crises” and “asset bubble burst” also emerge as governments struggle to balance fiscal priorities. In the longer-term horizon, geopolitical and technological risks are of concern too—including “geoeconomic confrontations”, “geopolitical resource contestation” and “cybersecurity failure”.

• Severity: Respondents signal again that environmental risks have the potential to yield the most damage to people and the planet, followed by societal challenges. “Debt crises” and “geoeconomic confrontations” are also in the top 10 risks by severity over the next 10 years.

• International Mitigation: Respondents’ views on 15 different governance areas signal broad disappointment with the effectiveness of international risk mitigation efforts. “Trade facilitation”, “international crime” and “weapons of mass destruction” were rated as the areas with most effective efforts, but only by 12.5% of respondents in the best case. By contrast, “artificial intelligence”, “space exploitation”, “cross-border cyberattacks and misinformation” and “migration and refugees” were seen by most respondents as the areas where international mitigation has not started.

A divergent recovery threatens long-term prosperity for all

Uneven recovery trajectories risk the emergence of divergent priorities and policies at a time when societies and the international community must collaborate to check COVID-19 and heal the scars from the pandemic. In some societies, rapid vaccine progress, digital leaps, and a return to pre-pandemic growth herald better prospects for 2022 and beyond. Others could be weighed down for years, if not decades, by struggles to apply even initial vaccine doses, combat digital divides and find new sources of economic growth.

• The most serious challenge persisting from the pandemic is economic stagnation. The macroeconomic outlook remains weak, with the global economy expected to be 2.3% smaller by 2024 than it would have been without the pandemic. Commodity prices, inflation, and debt are rising in both the developed and developing worlds. The pandemic and its economic consequences continue to stifle countries’ ability to control the virus and facilitate a sustainable recovery. Along with labour market imbalances, protectionist policies and widening disparities in education and skills, the economic fallout from the pandemic risks splitting the world into divergent trajectories.

• Governments, businesses, and societies are facing increasing pressure to transition to net-zero economies. An aggressive and rapid transition would alleviate long-term environmental consequences but could have severe short-term impacts, such as putting millions of carbon-intense industry workers out of jobs or triggering societal and geopolitical tensions. By contrast, a slower but more orderly transition would prolong environmental degradation, structural fragilities and global inequalities. Divergent trajectories across countries and sectors are creating more barriers to collaboration and cooperation in both scenarios.

• Growing dependency on digital systems—intensified by the response toCOVID-19—has fundamentally altered societies. At the same time, cybersecurity threats are growing and outpacing societies’ ability to effectively prevent or respond to them. Attacks on critical infrastructure, misinformation, fraud and digital safety will impact public trust in digital systems and increase costs for all stakeholders. As attacks become more severe and broadly impactful, already-sharp tensions between governments impacted by cybercrime and governments complicit in their commission will rise as cybersecurity becomes another wedge for divergence, rather than cooperation, among nation states.

• Growing insecurity in the forms of economic hardship, worsening impacts of climate change and political persecution will force millions to leave their homes in search of a better future. Yet in many countries, lingering effects of the pandemic, increased economic protectionism and new labour market dynamics are resulting in higher barriers to entry for migrants who might seek opportunity or refuge. Decreasing opportunities for orderly migration and the spillover effect on remittances risk forgoing a potential pathway to restoring livelihoods, maintaining political stability, and closing income and labour gaps.

• While humans have been exploring outer space for decades, recent years have witnessed an increase in private and public activity, both creating new opportunities and also signaling that outer space is an emerging realm of risk. The most immediate consequence of increased space activity is a higher risk of collision between near-Earth infrastructure and space objects, which could affect the orbits upon which key systems on Earth rely, damage valuable space equipment, or spark international tensions in a realm with few governance structures. Growing militarization of space also risks an escalation of geopolitical tensions, particularly as space powers fail to collaborate on new rules to govern the realm.