July 22, 2019
The High-Level Political Forum had a great event held by the International Coalition for Working Equids (ICWE)  at the Dag Hammarskjold Plaza on Tuesday 16th of July.

There was a display of some of the work of the ICWE coalition, materials to take away and a chance to chat with the members of the coalition. It is comprised of leading working animal NGOs Brooke, The Donkey Sanctuary, SPANA, and World Horse Welfare

The event highlighted issues such as there are An estimated 200 million working animals are essential to the livelihoods of some of the poorest communities worldwide. The traditional beasts of burden, their socioeconomic value and hardworking traits are often taken for granted, without realising the long-term benefits of ensuring better health and welfare for these animals.

It promoted the role of working animals in issues such as SDG 8 - Decent work and economic growth and SDG 1- no poverty: Many of the world’s most urgent Sustainable Development Goals (SDGs) can be achieved by cost-effective and simple solutions that benefit some of the poorest and most vulnerable people in society. The most striking example is the welfare of working animals. 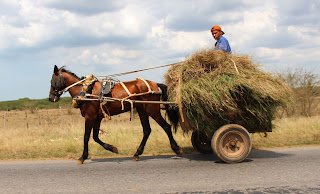 So how do Working Animals help deliver the SDGs?

In rural areas, working animals facilitate farming and transportation: they pull ploughs and carts, deliver goods to market, herd livestock and collect water from wells. Urban uses include construction, the transport of people and goods, and refuse collection. By enabling their owners to participate in work, they boost economic capacity and further benefit communities by enabling education, access to basic services and supporting gender equality.

Simple interventions can empower owners to keep their working animals healthy and ensure their continued productive benefit. Community development programmes offer improved access to good, affordable harnessing, hoof care and veterinary interventions while increasing overall awareness of animal health and welfare. Strengthening animal health systems through training and capacity building of government-employed veterinarians can also support the animals on which so many communities around the world depend. Expansion of current policy and legislation and implementing welfare standards would serve to enhance the recognition and protection of this valuable workforce. 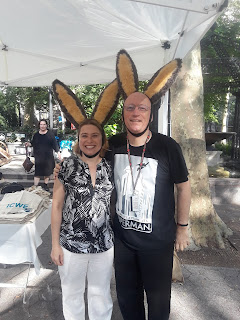 ICWE  asked member states at the HLPF to recognize and to promote the role of how working animals contribute to the livelihoods of some of the poorest people around the world. ICWE advocated the integration of these considerations into targets supporting education, climate change mitigation and adaptation, zero poverty, tackling inequalities, access to water and interlinkages between the SDGs. Achieving sustainable change where development needs are greatest and resources most scarce, involves complex partnerships and variable approaches. As an important part of this process, animal welfare supports strong and resilient livelihoods.
At the event, participants had an opportunity to use VR Headsets to really see working animals are key to so many communities.

The event also had amazing food from the new Peace Gardens Restaurant which everyone should go to for vegetarian and vegan food.