Re-released: The Way Forward Beyond Agenda 21 as part of Routledge's Library Editions 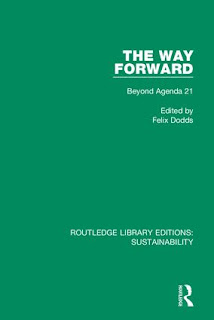 The Way Forward: Beyond Agenda 21 was first published in 1997 and was the second book I edited. This was in 1997 which marked the fifth anniversary of the United Nations Conference on Environment and Development - the celebrated ‘Earth Summit’ in Rio de Janeiro which represented the high-water mark of intergovernmental action for sustainable development.

It has been just republished as part of Routledge's Libary Editions - this is Volume 3 int he series. The volumes in this set, originally published between 1988 and 1997, draw together research by leading academics in the area of sustainability and provides a rigorous examination of related key issues. The volumes examine environmental policy and plans for a sustainable future. This set will be of particular interest to students of Environmental Studies.

Whilst some were tempted to dismiss the Earth Summit as a gesture of concern by the participating governments, the list of resolutions  and conventions which arose from the Summit is formidable, and the key text to emerge from the conference process, Agenda 21, had proven to be crucial to efforts to disseminate and implement the principles of globally sustainable development. The Summit also agreed the UN Framework Convention on Climate Change and the UN Biodiversity Convention as well as the Foresty Principles. It also set in motion the process that two years later would agree to the Convention to Combat Desertification.

The Way Forward outlines the successes and failures of those first five years. Calling on a list of eminent experts, it provides an unparalleled analysis of the agreements that were reached, and the stakeholders who were charged with implementing them. It reviews the progress that was made at the intergovernmental, national and grassroots levels, and offers a cogent summary of the major issues that needed to be addressed for the future. Lucid, compact and authoritative, this is the essential guide to ‘Rio plus five’.


What people have said about the book:
'for a realistic discussion of the UN programme for sustainable development... look no further. This book shows us where we are, and spells out clearly how much more needs to be done'
Matthew Taylor MP, Liberal Democrat Environment Spokesman
'a very important contribution to the environmental debate five years on from Rio'
Richard C I Bate, Director, International Chamber of Commerce
'a timely, well-researched, enjoyable read'
Cliff Curtis, Political Advisor, Greenpeace International
'offers the reader an opportunity to see what Rio was all about, how much we have achieved and signposts for the future. It is required reading for all concerned about the impact of the UN process on international, national and local environment and policies'
Barbara Young, Chief Executive Royal Society for the Protection of Birds
Agenda 21 felix dodds Henrique Cavalcanti Klaus Toepfer Nitin Desai