January 06, 2018
In the runup to Christmas, I have to admit my priorities were elsewhere than reading the second report on the ‘Repositioning of the UN Development Agenda’ which the Secretary-General had published. I am sure I was not the only one focusing on the holidays. The new year is now with us and so I thought I had better catch up.
Background to this report and its predecessor is that the UN needs to reorganize around the 2030 Agenda and the Paris Climate Agreement and to retool to help accelerate implementation. In addition, with the Trump Administration cutting back on its financial commitments being an urgent driver for change.
This has been made perhaps easier because of the changing leadership at the UN in the last couple of years. Not only do we have a new Secretary General – a former head of state – but also a Deputy Secretary General who played a significant role in the development of the Sustainable Development Goals. In the Agencies and Programmes we also have new heads at UNDP, WHO, IFAD, UNESCO, UNICEF, World Food Programme, UN Women, UN-Habitat and UNEP. In the UN Secretariat we have a new Under Secretary-General for UN DESA and soon new Deputies. This new team offers the Secretary-General a great opportunity to change the direction of the organization and to retool it for the twenty-first century.
The Secretary-General has in his new Report recognized that ‘prevention’ is better than dealing with the resulting problems after they have happened. In the area of climate change helping counties to build their resilience is critical. It also is the theme of the ECOSOC Special Meeting this year ‘Towards sustainable, resilient and inclusive societies through participation’ in May. Also in July the High-Level Political Forum will be on a similar theme that of ‘Transformation towards sustainable and resilient societies’.
The Secretary-General has identified three strategic priorities. These are:
Enhancing the UN’s contribution to sustainable development;
Reforming the peace and security architecture of the Secretariat to strengthen the UN’s action before and after a crisis;


From the report, this gives an idea of how this is being addressed 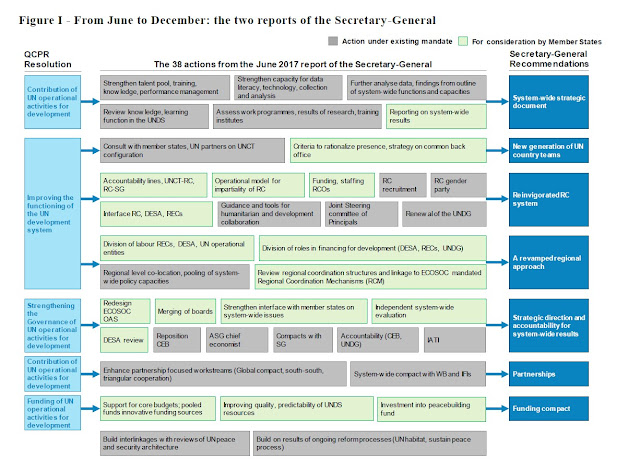 One of the critical elements of address both the 2030 Agenda and the Paris Climate Agreement is tge recognition that the interlinkages between the goals and targets need to be addressed. This will require much more coordination between the different Agencies and programmes at the international level and between government departments at the national and sub-national level. To enable this to happen more money needs to be budgeted for interagency work. This goes to the heart of doing things differently. At present according to the report it “revealed significant overlaps in our work, confirming the need for a better division of labor, enhanced coordination, and effective accountability systems.” In terms of funding, he notes that “Our funding base is highly fragmented, with 91 percent of all non-core flows allocated to single entity projects and only 6 percent channeled through interagency pooled funds.”
I can't help but put a plug for the Nexus Conference April 18-20th in Chapel Hill in North Carolina which is trying to do some of this in bringing together the UN, governments and stakeholders around the interlinkages between the climate, energy, water, food agendas looking through an Urban lens. There need to be more rewards for working together across issues, Agencies, and Programmes.

The Secretary-General wants to here shift to “a demand-driven model that ensures an optimized mix of UN operational capacities and expertise to support country priorities across the SDGs. It is supported by strengthened interagency planning mechanisms, more creative models of physical presence and common services. It relies on stronger linkages to specialized and non-resident agencies at the global and regional level to expand the offer for national partners, and stronger partnerships with local authorities, parliaments, civil society, subregional, regional and international institutions, academia, businesses and philanthropic organizations.”
This would require positioning the current UN Development Assistance Framework (UNDAF) “as the single most important UN country planning instrument in support of the 2030 Agenda.” This will cause concern among the Agencies and Programmes but will ensure more of a ‘One UN’ approach.  The approach is best expressed in figure II 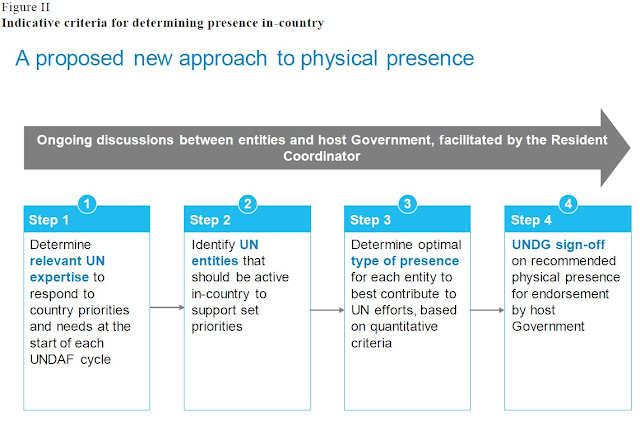 This builds on the work originally set out in the High-Level Panel on System-Wide Coherence which aw the ‘Delivering as One’ approach piloted out in now 26 countries. The intent here is to role this out further. The report points out of the 2900 UN premises globally only 16% are common premises. They suggest a target of 50% by 2012.  They are also proposing devising a strategy that would see the establishment of common back office for all UN Country Teams by 2022.” This could further imply the consolidation of “location-independent business operations into 6-7 networks of shared service centres.”

I commented on my worries about moving the RCs away from UNDP in my last blog on the first report. Since then I've seen Achim Steiner’s excellent vision and strategic plan for UNDP and am much more comfortable with the new approach in the report.  The Secretary-General identifies a number of skills that will be required of this new generation of RCs:
i.            Strong sustainable development professionals, with a deep understanding of the conceptual shift to the 2030 Agenda and of national planning processes.
ii.            Able to draw on the expertise and assets of the entire UN system to address Member States’ development priorities.
iii.            Better prepared to work across the development–humanitarian-peacebuilding continuum. This includes a strong understanding of relevant United Nations normative frameworks, the ability to translate these norms and standards into system-wide analysis planning and programming towards the Sustainable Development Goals. To support this, he commits to improve interagency mobility and ensure it is adequately incentivized — including across United Nations pillars.
The reorganizing of the UN Development Coordination Office (DOCO) will now assume managerial and oversight of the Resident Coordinators and it is suggested it should be a standalone office headed by an ASG and directly reporting to the UN Deputy Secretary-General and renamed the UN Sustainable Development Group Office.

The Funding Compact
Funding is critical for the success of the reform - here is the propsoed 'compact' between Member States and the UN for delivering . 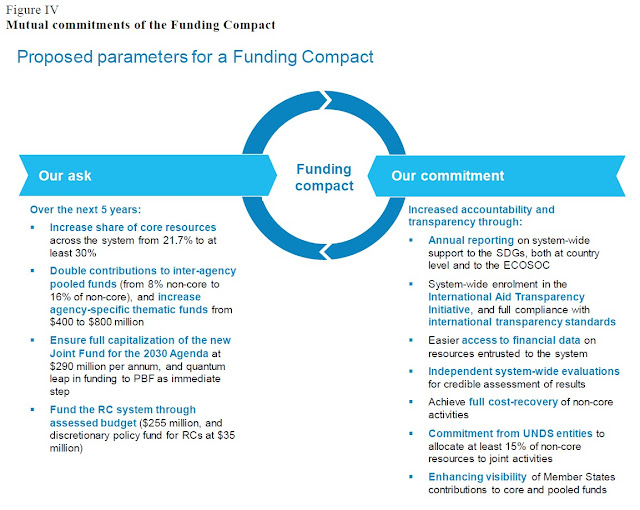 This is an excellent report on a new direction for the UN and should be fully supported by the Member States and stakeholder alike. This will require the Agencies and Programmes to review their strategic plans if it goes ahead and they could look at the approach UNDP are taking as an example of what can be done.
UN secretary general reform