Wonder Woman should STILL be a UN Ambassador 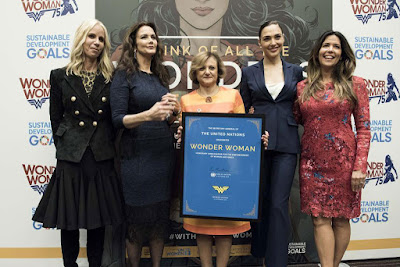 Published on Inter Press Service News Agency here.
I realize it’s a lot easier saying this now after the film of the same name has come out and has taken over $400 million in US box office receipts. It is at present taken the 8th most revenue for a super hero comic book ever.
But it does begin to look as though UNICEF and DPI – bowing to the significant number of staff whose unprecedented, outraged opposition prompted their reversal - made a mistake. A huge, global mistake.
Here's the history -
UNICEF announced the comic book heroine Wonder Woman as a UN Ambassador last year on UN Day, the 21st of October. Her role was meant to empower young girls by seeing her as an example the original UN Press Release said:
“the iconic superhero, has been named an Honorary Ambassador for the Empowerment of Women and Girls by the United Nations and will be tasked with raising awareness about Goal 5 of the UN Sustainable Development Goals, which seeks to achieve gender equality and empower all women and girls by 2030.” 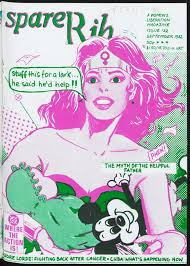 And 2016 was a very important year for Wonder Woman it’s the 75th anniversary of her first appearance as a superhero.
The reaction on her becoming an Ambassador wasn’t very positive in UN circles and women’s organizations. There was an online petition against the decision which over 45,000 people signed and key UN staff and women’s groups were vocal about their opposition to the decision.   A group of staffers attending the launch meeting stood and pointedly turned their backs as the event started.
Their criticisms ranged from Wonder Women’s role as a figure promoting violence, as a sexual stereotype, and as a representative of US jingoism (her red, white and blue uniform indeed reflected American patriotism of the WWII era during which she was produced).
"The message to girls is that you are expected to meet a male standard in which your significance is reduced to your role as a sexual object," said Anne Marie Goetz, a professor of global affairs at New York University and a former adviser on peace and security issues to the United Nations agency, U.N. Women.
It was a rather extraordinary rebellion. But it was also understandable. The fictional character's 'appointment' had been announced just after the real-world selection of António Guterres as UN Secretary General, contrary to months of wide expectation was that the next SG would be a woman. 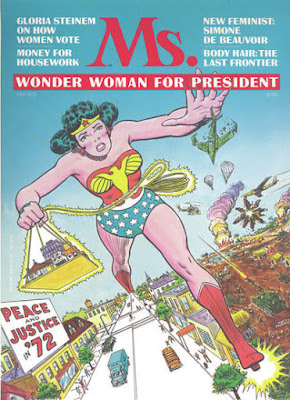 But historically and on substance, the reaction was in some ways surprising. The 1970s feminists including Gloria Steinem saw Wonder Woman as an inspiration. In fact, the first issue of the feminist magazine Ms. had Wonder Woman on its front cover.
Perhaps those criticizing actually hadn’t done a due diligence on who Wonder Woman was. Clearly none of them were comic fans.
William Marston who invented the Wonder Woman character, was a friend and great admirer of Margaret Sanger, the co-founder of Planned Parenthood. His description of the character was anything but stereotypical or belittling. In 1947 Marsten said:
'You know, you need a female superhero because she will embody the nurturing values of womanhood. She will be about peace not war. The only hope for civilization is the greater freedom, development and equality of women in all fields of human activity. Frankly, Wonder Woman is psychological propaganda for the new type of woman who should, I believe, rule the world."
So now we come to the film itself. First it was one of the best films of 2017 so far. It was directed by a great director Patricia Lea Jenkins whose previous 2003 crime drama film Monster about serial killer Aileen Wuornos, a former prostitute who was executed in Florida in 2002 for killing six men in the late 1980s and early 1990s. Because of Wonder Woman success, Jenkins now holds the highest take for a film directed by a woman. It has become the highest-grossing movie directed by a woman, surpassing previous record holder Mamma Mia. 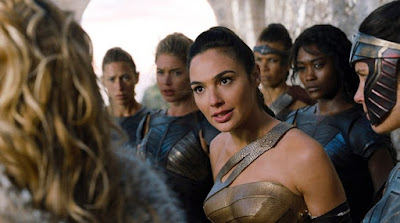 She achieved that as a director with a remarkable grasp of characterization and emotional depth. The film doesn’t present Wonder Woman as a sex symbol, but as friendly and very intelligent young woman. The choice of Gal Gadot as Wonder Woman was masterful. As an actor, she comes over as a real and accessible individual. While there has been some criticism of her being Israeli, I have to assume that no UN representative would support discrimination based on nationality or religion.
Besides, I thought it neatly complemented the fact that the lead individual who advanced the idea of Wonder Woman in the UN as a UN Ambassador was Mayer Naser – a Palestinian.
Here are some of the reviews: 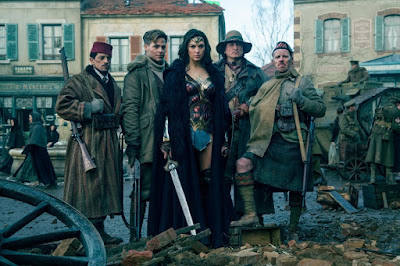 “Wonder Woman embraces issues of female power and the need to turn from hate to love, war to peace in a mainstream delivery system. And the female lead is not solely a mother, sister, girlfriend or hooker, however gold her heart: wonder of wonders!”  Thelma Adams New York Observer
“Wonder Woman” is a tale of transmission, of wisdom passed down from generation to generation, from woman to woman, and from individual women to society at large—for those in society at large who are able to hear and heed it. It’s a visual tale of oral history, an allegory that cuts both ways: even as the segregation of women on Themyscira sends Diana into the world with a narrowed view of humankind, male-dominated human society at large, which keeps women largely out of power and cultural authority, keeps itself stultified, blinded, ignorant, oppressive, violent, warmongering. This, too, is part of the film’s exemplary present-day framework, both dramatic and ideological. Diana isn’t a warrior to end all wars, she’s a warrior to warn against wars—and against the parochial, self-enclosed island doctrines which are employed to justify them. In her work at the Louvre, she cultivates not just her own garden but a garden for humanity at large.” Richard Brody The New Yorker

Gloria Steinem and others
“Yes, she is sort of naked a lot of the time, but this isn’t objectification so much as a cultural reset: having thighs, actual thighs you can kick things with, not thighs that look like arms, is a feminist act. The whole Diana myth, women safeguarding the world from male violence not with nurture but with better violence, is a feminist act. Casting Robin Wright as Wonder Woman’s aunt, re-imagining the battle-axe as a battler, with an axe, is a feminist act. A female German chemist trying to destroy humans (in the shape of Dr Poison, a proto-Mengele before Nazism existed) might be the most feminist act of all. 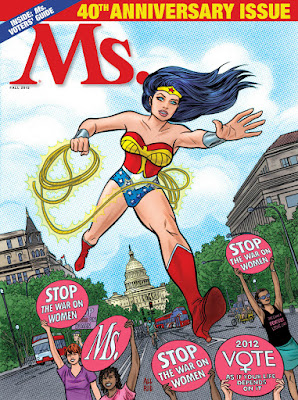 Women are repeatedly erased from the history of classical music, art and medicine. It takes a radical mind to pick up that being erased from the history of evil is not great either. Wonder Woman’s casual rebuttal of a sexual advance, her dress-up montage (“it’s itchy”, “I can’t fight in this”, “it’s choking me”) are also feminist acts. Wonder Woman is a bit like a BuzzFeed list: 23 Stupid Sexist Tropes in Cinema and How to Rectify Them. I mean that as a compliment.” Zoe Williams Guardian
As I publish the blog Wonder Woman is $3.5 million short of overtaking the top grossing Spiderman movies. She may very well do that this weekend. She is also only $8 million short of overtaking the top Captain America movie and $9 million short of overtaking the top Iron Man movie. That will bring her to the 5th biggest domestic taking for a comic book adaptation with only Batman ahead of her as a movie about a single superhero – the other slots are Avengers movies.
Finally let’s go back to the original UN Press Release and reflect on it. It said:
“Wonder Woman's strength and fight for justice and peace will help to focus the campaign's attention in five key areas: 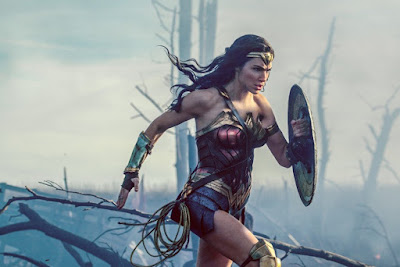 All of the above were in one way or another reflected in the film and add to that the grace that Gal Gadot brought as Wonder Woman then perhaps the time is right for Wonder Woman to become again a UN Ambassador.