Now OUT Negotiating the Sustainable Development Goals: A transformational agenda for an insecure world by Felix Dodds, Ambassador David Donoghue and Jimena Leiva-Roesch

Negotiating the Sustainable Development Goals:
A transformational agenda for an insecure world
by Felix Dodds, Ambassador  David Donoghue and Jimena Leiva-Roesch
Avialable 8th of November
"Learning from the process that engaged so many stakeholders at national and international level is important for future multilateral negotiations. This contribution from three actors intimately involved in the process offers rare insights into a long, challenging and ultimately fruitful process. I hope many readers will enjoy the insights presented in this book and be inspired to realise that the impossible is possible through compromise, partnership and leadership."

Felix Dodds is a Senior Fellow at the Global Research Institute and a Senior Affiliate at the Water Institute at the University of North Carolina, USA, and also an Associate Fellow at the Tellus Institute, Boston, USA. Felix has edited or written fourteen books on sustainable development and UN-related issues and was Chair of the 2011 UN DPI NGO Conference 'Sustainable Societies Responsive Citizens'. From 1992 to 2012 he was Executive Director of the Stakeholder Forum for a Sustainable Future.

Jimena Leiva-Roesch is a Senior Policy Analyst at the International Peace Institute. Previously she was a diplomat for the Permanent Mission of Guatemala to the United Nations in New York, USA. She was a lead negotiator for the 2030 Agenda for Sustainable Development and for climate change. She offers hands-on training on multilateral negotiations to diplomats and students worldwide. Jimena was an active member of the Security Council team when Guatemala was an elected member in 2012–2013.

20% Discount Available - enter the code FLR40 at checkout* Order through here.  It is also available on Amazon but without the discount. 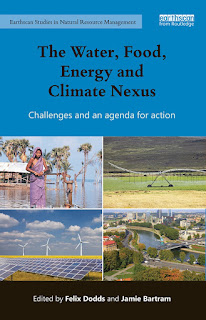 Edited by Felix Dodds and Jamie Bartram. You can use the same discount code  FLR40 at checkout*  Order through here.  also available on amazon.


"Never before has the world needed an integrated approach to sustainable development more. The principles and strategies explored in this book provide a roadmap for just that." – Danny Sriskandarajah, Secretary General, CIVICUS.

Global trends of population growth, rising living standards and the rapidly increasing urbanized world are increasing the demand on water, food and energy. Added to this is the growing threat of climate change which will have huge impacts on water and food availability. It is increasingly clear that there is no place in an interlinked world for isolated solutions aimed at just one sector. In recent years the "nexus" has emerged as a powerful concept to capture these inter-linkages of resources and is now a key feature of policy-making.

This book is one of the first to provide a broad overview of both the science behind the nexus and the implications for policies and sustainable development. It brings together contributions by leading intergovernmental and governmental officials, industry, scientists and other stakeholder thinkers who are working to develop the approaches to the Nexus of water-food-energy and climate. It represents a major synthesis and state-of-the-art assessment of the Nexus by major players, in light of the adoption by the United Nations of the new Sustainable Development Goals and Targets in 2015.

With a foreword by HRH the Prince of Wales