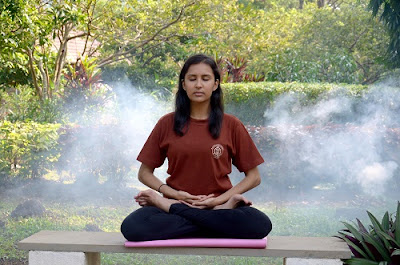 Guest blog by Eela Dubey. Eela is a former New Yorker who decided to leave a career in finance to follow in the footsteps of her grandfather, an esteemed Indian yoga guru. She spends most of her time traveling around the world and assisting his pranayama workshops. On the side, she is an independent consultant at Kaivalyadhama Yoga Institute and is an avid blogger of traditional yoga and ayurveda.

I’ve spent a good portion of my adult life living in a society marred by fads. As a former New Yorker, especially, I would be a liar not to admit that our culture is driven by the latest, trendiest, and fleeting socio-economic norms. We are a part of this grand herding effect whereby we fall victim to the behavioral biases of the crowd at large and lose our sense of self-awareness. While I do not wish to offend my ancient yogic lineage and all those who strive to promote its authentic form, yoga has become just another one of those fads. Its meaning has become diluted, and its message has become misconceived such that many people have blind faith in something they barely seek to understand.

Unbeknownst to many, however, is what yoga actually stands for and how its meaning is rooted in something so simple and nascent to each and every one of us: our own inner divinity.  In the conversations that I have with people, nine times out of ten, people cannot correctly answer the question: what is yoga? Too often than not, it is perceived as a workout where the ultimate goal is to tone your muscles and decrease your waist size. In many cases, it has become synonymous with a form of calisthenics. In that light, it is necessary to point out that the way yoga has transformed seems highly correlated with our obsession around a fit body.

In our concentrated efforts to attain such “model bodies,” we have embarked on this path where the all too common themes are outlets with a quick fix and heavy physical exertion. This includes everything from dangerous diet plans to power yoga. Rather than focusing on the internal and metaphysical drivers that constitute our intrinsic well-being, we are too focused on those external forces that have short-lived momentum. Acceptance, as taught by some of the purist forms of yoga, starts with the holistic self. It needn’t be what others think of your abdominal muscles. Rather, it begins with understanding each and every element that you are composed of. For it is this acceptance that allows us to accept the pure self and the inner consciousness within. Everything else is just noise.

What, then, is yoga and what is its derivation?

While the exact origin of Yoga is unknown, the earliest and most acute traces of Yoga date back to an ancient Indian sacred text written in Sanskrit known as the Rig Veda. This was around eight thousand years ago. Yoga derives its roots from the Sanskrit word “Yuj” which means “to join.” 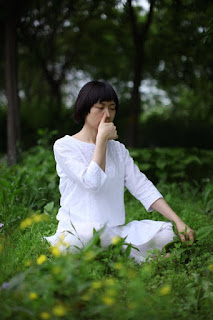 The very first systemic approach to Yoga was documented by a man named Patanjali, who wrote 196 aphorisms, commonly known as Patanjali’s Yoga Sutras. These sutras laid the foundation for one of the most ancient and philosophically rich methodologies of Yoga. Patanjali’s writings are truly unparalleled as they encapsulate the entire psycho-physical element of Yoga as a way of life, rather than just a repetitive practice. According to him, the purpose of Yoga is to reach Samadhi, i.e., realize the true self. In order to find out the real source of our origin and who we are, it is necessary to further evolve and achieve such a state of integration where one’s personality gets totally integrated and cannot see differences amongst human beings. The goal is to see unity within nature within all humans. This ultimately manifests into a feeling and understanding that we are all one, for this is the true nature of man, according to him.  Then, automatically, the question of violence does not arise. And that is one of the most important aspects of yoga: inner peace and nonviolence.

Yoga, as per Patanjali, is delineated into eight main components of which I summarize four. He took into consideration the average man of society, and in order to ensure a congenial atmosphere and frame of mind for the ensuing Yogic practices, advocated the observances of Yamas and Niyamas. Yamas and Niyamas are habits and conscious directions on which to base your life that clear the way to the ultimate state of expanded consciousness aimed at in Yoga.

In short, we can sum up the Yamas in five basic parts:

1)  Ahimsa: “Abstention from any thoughts of hatred or wish to harm others”

3) Asteyam: “Abstention from any tendency to steal”

4) Brahmacharya: “Learning those practices that will take you to self realization” and

5) Aparigraha: “Abstention from hoarding one’s own or coveting others’ wealth and possessions”

The second component is the Niyamas, which are also divided into five parts:

1) Sauca: “Cleanliness and purity- of mind and body”

3) Tapas: “Self-discipline, austerities (only such as would not affect one’s health)”

4) Svadhyaya: “Engagement in study of such literature and/or in such other mental activities as would help self-realization” and

5) Ishvara Pranidhana: “Surrendering to the universe’s will”

The third component of Patanjali’s yoga is concerned with asanas. He describes asanas as postures associated with slow and effortless movements that contribute to the steadiness of the body and a feeling of well-being at the psychological level. Patanjali clearly states that asanas are not physical, dynamic exercises but are rather static positions in nature that need to be performed with minimal effort. His yoga sutras further delineate the definition, the technique, and the result of asanas. The ultimate goal of asanas is to minimize conflicts, reduce the level of stress, give you a steadiness of the mind as well as good physical and mental health.

The fourth component of yoga is Pranayama, which focuses specifically on the inhalation, retention, and exhalation of the breath. There are specific rules regarding the method of breathing, the force of breathing, the duration of each phase of breathing, attention and concentration on certain points in the body during the process of breathing, etc. “Prana” in Sanskrit refers to energy, or one’s life force. “Ayam” in Sanskrit means to stop/extend. According to Patanjali’s Yoga Sutras, one’s “Prana” is essential to the development of her/his personality, and in order to experience spiritual growth, it is necessary that all pranic channels are clean.

In its truest essence, Yoga is a much more intricate and nuanced science than meets the eye. Seldom do people take the time to understand not only its etymology but also its whole mission. It is a scientifically proven and deeply rich way of life with many moving pieces on how to achieve a state of holistic well-being. It is not simply an asana you practice after a rough day of work or something you do as a form of relaxation. But rather it is a psycho-physical direction of life to help overcome one of the biggest hindrances of man: the human mind.