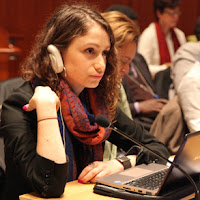 WRITTEN BY
Alexandra Tohme
is an independent journalist and program coordinator at The Lebanese Center for Policy Studies in Beirut.

The impending siege of Aleppo will have horrific ramifications for Syria, the region and global security. If the current U.S. policy in Syria does not change, the war-torn country risks falling into the hands of both Assad's regime and the Islamic State group.

BEIRUT – The total encirclement and besiegement of Aleppo by brutal forces is imminent. On one front, Bashar al-Assad’s regime forces backed by Iranian militias and Russian airpower is closing in from the west, on the other, the so-called Islamic State group is closing in from the east. Some 300,000 civilians and moderate rebel groups are now trapped between these two tyrannical forces. A total besiegement of Aleppo would translate into the worst humanitarian catastrophe in the Syrian conflict thus far, and the political ramifications of the siege would be devastating to the current U.S. campaign against ISIS.

The White House has repeatedly dismissed solutions to this situation: Policy proposals that range from no-fly zones to safe zones to increased reinforcements to rebel groups have been drafted, amended and even watered down in face of an ever resistant and unmoving core in Washington’s administration. The White House also rejected the State Department’s dissent memo, where a nearly unprecedented 51 U.S. officials risked their careers to protest the administration’s strategically and morally bankrupt policy and to express disapproval of its failure to mitigate Assad’s mass murder campaign.

The dangers behind the failure to adopt any of these options are now apparent: The last of the moderate fighting forces in Syria, deemed as “essential partners” for the fight against ISIS, now face a fatal blow. If Washington wants to adopt a more effective anti-ISIS strategy, and prevent further atrocities, it needs to take decisive action now to ameliorate the situation on the ground. This entails addressing the factors that allowed ISIS to rise across the country, something the current strategy has failed to do so far.

First of all, prolonging Assad’s rule is never going to work. His regime’s survival will only continue to breed radical networks and terrorize average civilians into extreme survival mode. It has been widely reported, including by a former member of the Syrian Military Intelligence, that in 2011 the regime released hundreds of jihadists from prison, some of whom later became top figures of ISIS leadership. While peaceful protesters were rounded up and tortured, Assad set free high-profile Islamist extremists in order to justify his message to the world that his regime was fighting “terrorists” in the early days of the revolution; he did the same in 2003, sending insurgent fighters into Iraq.

Second, the causes for the moderate opposition to lose ground must be understood. Last year, it seemed as though Assad might lose the war to the opposition. Lacking manpower as more soldiers defected from his army, and suffering setbacks on the battlefield, in September 2015 he invited two foreign forces to save his increasingly illegitimate regime: Russian airpower and a surge of additional foreign Shiite militias. The two elements proved to be game-changers that enabled the regime to regain territory and besiege civilians into prison-like cities that lack basic food, water and medicine. For years, the residents of Daraya who have been hoping for promised food airdrops, awaiting desperately needed aid for their survival, have been met with barrel bombs instead, as horrifying footage from recent weeks reveals. These “barrels of death” are indiscriminate weapons packed with explosives, metal shrapnel and at times even sarin gas to cause ultimate destruction.

Is there any wonder still why Syrians continue to flee their homeland?

Meanwhile, ISIS has greatly benefited from Russian airstrikes, which have essentially acted like their “de facto air force,” as described by journalist Rami Jarrah reporting from the front lines of rebel and ISIS positions. With the militants’ black flag waving high in full visibility, it was a wonder why the Russians continued to strike the moderate groups on the other side of the hills instead. Intelligence maps of military action and territory reveal how they have targeted liberated areas of civilians and opposition group control, and thereby enabled ISIS, free from aerial bombardment, to gain new territory, launching offensives against the same rebel groups being fired on by Russian jets.

As Secretary of State John Kerry arrives in Moscow, the United States needs to take a hard look at its own policy and the consequences of the decisions made and not made over the past five years. Lack of coherence and a strong position has given Assad free rein to continue his civilian slaughter and the green light for Russia to strike the Syrian opposition groups that have proven to be efficient in fighting ISIS: They drove them out from Aleppo and Idlib in a matter of days, as well as Deir Ezzor and around Damascus.

“We Syrians will never accept to replace one tyranny [Assad] with another [ISIS]!” – this has been the line repeated over and over again by Syrians in Turkey, Lebanon, Europe and the screaming cry of those inside. The fact that these two forces continue to advance is reflective of a wider failure of international action, or lack thereof, to support a just and peaceful outcome to this conflict that has affected the political, economic and security landscape far beyond Syria’s borders.

Arguably the single greatest barrier to U.S. strategy to fight ISIS in Syria has been the Russian and Assad air force. Even President Obama has admitted to this and politely asked Putin to “stop bombing moderate rebels as a major obstacle to the latest efforts to end the war.”

Washington can continue to skirt the issue with such proclamations, including of “military coordination” with Russia, but the reality is unavoidable and unraveling before us with disastrous consequences, strategically and morally. The failure to provide civilian protection from these airstrikes has not only let ISIS gain more ground, but it has also helped to legitimize groups such as al-Qaida’s Syrian affiliate Jabhat al-Nusra that do provide civilian protection.

It should be telling that while ISIS and al-Qaida are benefiting from the current policy and unfolding situation, Assad and Putin are also achieving their regional interests – and ending the bloodshed is not one of them. As long as ISIS still exists, Assad can continue to use the group as its excuse for barrel bombing civilian populations and the rebel groups supported by the West. One mother who had just fled Aleppo told me at the Turkish border crossing, “The regime is with ISIS,” soon echoed with a chorus of other refugee voices repeating the same line: “The Assad regime is with ISIS!”

Aleppo, a symbolic stronghold of the revolution, is now days away from falling to these two forces; the urgency cannot be underestimated.

First, it was Tal Rifaat. One of the first towns in Syria to protest and expel ISIS was overrun by regime forces after the “cessation of hostilities” was agreed upon in Munich. Members of the opposition, who had risked their lives to keep extremist groups out of Aleppo since 2012, face encroachment once more. Then it was Azaz, where the regime and its allies are squeezing the last ways out for any Syrian to avoid ISIS territory or to flee aerial bombardment. Now, it’s Allepo’s Castello Road. Assad’s forces are situated on this only road left to move in and out of the city, firing on anything trying to cross.

Blocking critical lifeline routes and besieging Syrians in the city is driving them into the very arms of ISIS – the West’s enemy that it is attempting to degrade.

To stabilize the situation and counter a global security threat, the United States needs to make a commitment to civilian protection and strengthen its support to the moderate opposition. When Kerry lands in Moscow, there must be conditions: stop striking rebel groups and commit to limited no-fly zones and/or safe zones in northern and southern Syria. Not only can the United States regain lost credibility, but it can de-escalate the violence and human suffering, and prove that “never again” does indeed apply to Syria.

Or, President Obama can continue to waste time discrediting proposals that no one is making, like deploying U.S. troops to Syria, a policy not one of his critics has advocated. What they have been advocating for are ranges of civilian protection options that would not involve ground troops, but would reduce refugee flow, save lives, make aid delivery easier and empower the moderate mainstream. A feasible policy option is there, and the U.S. delegation should not walk into a negotiating room without one. Otherwise we risk leaving one of the Middle East’s largest, most embattled conflict zones and historically central and strategic countries to be ruled by twin tyrants. One is committed to attacking the West, subjugating locals and spreading one of the most fundamentalist ideologies the world has seen yet. The other, largely responsible for the rise of the first, is committed to slaughtering and starving civilians and destroying the entire nation of Syria at any cost. The ramifications for the region and international security could not be darker.

This article was originally published by An-Nahar and is reprinted here with permission.