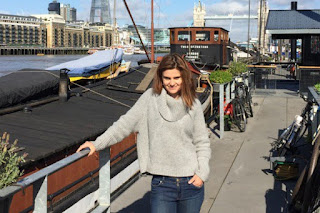 Everyone is shocked about last weeks assassination of the Labour MP Jo Cox. Many of us who worked at the UN  will know Jo she worked for the aid groups Oxfam and Oxfam International between 2001 and 2009, serving first in Brussels as the leader of the group's trade-reform campaign, becoming head of policy and advocacy of Oxfam GB in 2005, and then becoming head of Oxfam International's humanitarian campaigns in New York in 2007.  Her work at Oxfam, including meeting disadvantaged groups in Darfur and Afghanistan, influenced her political career.

Jo's charity work later led to a role advising Sarah Brown (the wife of former British Prime Minister Gordon Brown), who was spearheading a campaign to prevent deaths in pregnancy and childbirth. Jo was national chair of the Labour Women's Network and a senior adviser to the Freedom Fund, an anti-slavery charity. She was elected  MP for Batley and Spen seat being vacated by Mike Wood in the 2015 general election. Listen to her maiden speech in the House of Commons.


In celebration and the memory of Jo Cox MP, her family and friends are raising funds to support charities closest to her heart:

HOPE not hate, who seek to challenge and defeat the politics of hate and extremism within local communities across Britain.

The White Helmets: volunteer search and rescue workers in Syria. Unarmed and neutral, these heroes have saved more than 51,000 lives from under the rubble and bring hope to the region.

In her husband Brendan’s words: 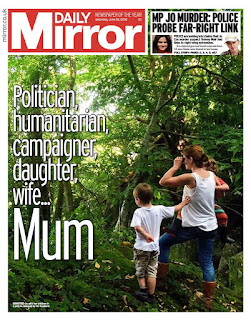 "Jo believed in a better world and she fought for it every day of her life with an energy, and a zest for life that would exhaust most people. She would have wanted two things above all else to happen now, one that our precious children are bathed in love and two, that we all unite to fight against the hatred that killed her.”

Let's come together and give what we can to help create that better world.


Please support her memory and the work she care about go to the GoFundMe page here.

A wonderful message on the page fromKofi Owusu-Ansah’s comment read: “[I] pray your family gets comfort in this dark hour. I am an immigrant, who found hope in your words of tolerance, compassion and love; in a world where we are written off by many as evil invaders, benefits scoundrels, rapists and terrorists.” 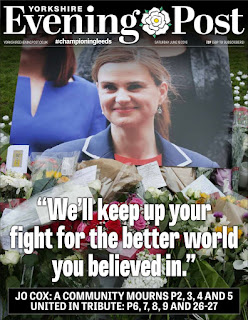