Guardians of the Galaxy- a must see

August 08, 2014
Those of you who are long time readers of my blog will know of my comic addiction, my campaign to be the next Doctor Who and my love of films.

I had the pleasure of seeing Guardians on the preview night in Apex with very few people now of course its the most popular film out there. You have to love the raccoon 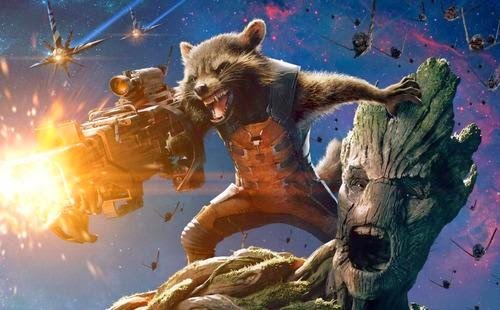 Rocket Raccoon was created by Bill Mantlo and Keith Griffin two of the A list of writers and artists of the last 40 years. What i hadn't realized was that Bill had been in institutional care since 1992 because of a hot and run accident. Marvel organized a private showing for Bill - well done Marvel.

What is great about Guardians compared to other superhero films which i learnt yesterday in the Guardian (newspaper) have been planned out to 2027 by the movie houses is the humor.

The film is built around Peter Quill (who calls himself  “Star-Lord” ) transported as his mother dies as a kid into space with his only possession a walkman (for those younger readers this is what we used to listen to music on it had a tape - which often got crunched up)  with a1980s tape mix produced by his mother - great music. Quill has become a “ravager,” which is somewhere between an Indiana Jones adventurer and a nasty pirate. Not to give too much away he ends up leader of a bunch of misfits Drax the Destroyer, played by WWE Superstar Dave Batista,Gamora, a butt-whooper and “daughter” of uber-villain Thanos played by the amazing Zoe Saldana, Vin Diesel playing Groot’s whose only line seemingly to replace Chewy’s raaaaggrh [Star Wars] with the phrase “I am Groot!” and finally i forgot to say its Bradley Cooper playing Rocket.

Peter is so upset that his mother died that the last present that his mother gave him before she died was a letter and a parcel which he hasn't opened -- but he does at the end of the film. What is it - a second mix tape. So here are my suggestions for what should be on that mix tape.
MIX VOL. 2 TRACKLISTING
David Bowie – “space oddity “
Wizzard – “See My Baby Jive"
Gary Glitter – “I'm the Leader of the Gang (I Am)”
"I Will Survive - “Gloria Gaynor”
Three Dog Night – “Mama Told Me (Not to Come)”
The Archies – “Sugar Sugar”
Boomtown Rats – “I Don't Like Mondays”
Stevie Wonder – “Superstition”
Harry Nilsson – “Everybody’s Talkin'”
John Travolta and Olivia Newton-John – “You're the One That I Want"
T. Rex – “Hot Love”
Mott the Hoople  – “All the Young Dues”
Gilbert O’Sullivan – “Alone Again (Naturally)”
Electric Light Orchestra – “Livin’ Thing”
Monkees – “Last Train to Clarkesvile”
David Cassidy – “Could It Be Forever"
Sweet – “Ballroom Blitz”
Commodores – “Easy”

So what would your 1980s mix tape look like?

guardians of the galaxy mix tape