Today more than ever, when the world is beset by environmental, social, healthcare and economic challenges, we need courage in our politics, both nationally and globally. This book tells the stories, some for the first time, of twelve individuals who made heroic contributions to protecting our planet through ground-breaking international treaties. 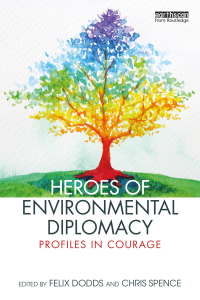 Can individuals change the world? Today, when impersonal forces and new technologies seem to be directing our lives and even our entire planet in ways we cannot control, this question feels more relevant than ever before. This book argues that we can all make a difference. It tells inspiring stories of individuals who have had a global impact that is beyond dispute, as well as others who have brought about change that is understated or hard to measure, where the scale of the impact will only become clear in years to come. While some are scientists, others are politicians, diplomats, activists, and even businesspeople. However, they all share the qualities of perseverance, patience, a willingness to innovate or try new approaches, and the endurance to continue over years, even decades, to pursue their goal. Drawing on interviews and the inside stories of those involved, each chapter follows one or more of these heroic individuals, a list which includes Luc Hoffmann, Mostafa Tolba, Maria Luiza Ribeiro Viotti, Raul Oyuela Estrada, Barack Obama and Paula Caballero.

Presenting an uplifting and gripping narrative, this book is an invaluable resource for students, scholars, activists and professionals who are seeking to understand how consensus is reached in these global meetings and how individuals can have a genuine impact on preserving our planet and reinforcing the positive message that global cooperation can actually work.

"Heroes of Environmental Diplomacy is a fascinating read. While many books focus just on the issues, this one provides valuable insights into the people who made things happen. As someone who has been involved in the UN and intergovernmental negotiations for many years, I can attest to the importance of unique individuals in helping secure success. As we enter a critical decade for humanity in our struggle with both climate change and biodiversity, this book shows we can succeed in crafting a path to a more sustainable future and illustrates the role individual heroes can play."

"Tina Turner couldn’t have been more wrong when she sang ‘We don’t need another hero’. As this book shows, humanity has always needed heroes to prevent short-termist, populist and destructive forces holding sway and leading the charge towards environmental ruin. Who will step forward and be the heroes of this decade? Heaven knows they’re sorely needed – and this book shows with both depth and colour what heroism entails and what it brings."

"Heroes of Environmental Diplomacy" opens with this simple question "What makes a hero?" The answers are found woven in the inspiring stories of the courageous, ordinary people profiled in this treasure of a storybook. Readers will enjoy an intimate look at the struggles, perseverance, hope, and stamina that inspired the people highlighted in the book to work tirelessly to turn aspirations into realities. This treasure of a book will greatly expand the knowledge base of the foreign policy community, but equally important it will inspire a whole new generation of justice-seekers to keep on talking, writing, debating, compromising - and ultimately creating the future agreements needed to secure the brighter future these ordinary heroes have gifted us the opportunity to pursue."

"Heroes of Environmental Diplomacy makes a profound contribution to the literature on global governance innovation by detailing the practical, creative, and often-times courageous ways diplomats have navigated complex and politically fraught multilateral environmental negotiations. With original insights on circumventing spoilers and mobilizing multi-actor coalitions for progressive environmental change, the book will serve as an important playbook for policy researchers, practitioners, and advocates concerned with updating global institutions, legal instruments, and other arrangements to address current and emerging global challenges."

"In Greek mythology, the hero was half a God. The etymology remains but the meaning has evolved and become more varied. A hero has become a sort of superwoman/superman and protector, a brave and courageous person, in brief, a winner. In French a héros can be the main protagonist of a narrative. Their trait of character is to be embodied in an ideal system of values, to show self-sacrifice in front of critics and perseverance in a world that is often disheartening. Their feats and achievements must be reported to be models of excellence. This is all the merit of the present publication. During my career, I had the privilege to meet several of the heroes described within, who deserve to be mentioned. The French author Malraux wrote: "There is no hero, without an audience". I would say that they have mostly been convincing leaders. Indeed, they were seasoned negotiators and brilliant spokespersons, supported, however, by dedicated assistants conducting specific discussions. Corridor diplomacy is essential in the multilateral arena. Therefore, the whole cast are heroes!"

"History is not the result of anonymous or mechanic forces, but of human action. And human action, while shaped by environmental and social factors, essentially means that human leadership is important to shape history’s course. This has sometimes been overlooked, and that is especially true for environmental history, since here the natural focus is exactly on environmental factors and social activities as aggregates more than individual action. But also environmental protection has a deeply human side and it is good that the new book edited by Felix Dodds and Chris Spence, Heroes of Environmental Diplomacy: Profiles in Courage, brings to the forefront those who have fought on the international stage for rules making the world more a fair, equitable and sustainable for all of us to live in together. It is interesting to see a common thread for the chapters, namely that not only professionalism and success, but also the human side and compassion of the actors is important for their career. Regardless of their focus, more technical ones like the ‘Basel Convention on the Control of Transboundary Movements of Hazardous Wastes and their Disposal’ or more conservation-driven once, environmental conventions, treaties and events like the Ramsar Convention on Wetlands, the International Whaling Commission or the Rio Earth summit, show that environmental heroes need professionalism and compassion. This book is a welcome addition to the existing, more technical literature on environmental history well suited for students, academics and people working in the field of international environmental cooperation."

"I have read this book with pleasure. The book concept is refreshing and gives in a fascinating personalized insight into how important steps on global environmental progress have been achieved. The authors manage to write the various stories in a way which is highly readable and give great background about serious issues and at times amusing characterizations of people who have been global environmental heroes. Definitely recommended reading for those interested in environment and the way of international negotiations proceed".

"Heroes of Environmental Diplomacy vividly illustrates how leadership arises from necessity and how individuals with vision and stubborn optimism make diplomacy and multilateralism work and bring lasting results for human development. This is a very accessible book for anyone interested to learn about how some of the most important struggles in multilateral environmental history have been won, and the inspiring individuals at the center of those achievements."