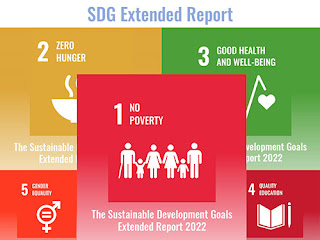 The 2022 Sustainable Development Report - a little late blog it came out in July.

The Report highlights the severity and magnitude of the challenges before us, with these cascading and intersecting crises creating spin-off impacts on food and nutrition, health, education, the environment, and peace and security, and affecting all the SDGs, the blueprint for more resilient, peaceful and equal societies.

COVID-19 AND ITS CONSEQUENCES

According to the latest data presented in the Report, the COVID-19 pandemic has wreaked havoc across the Goals and its effects are still far from over. Global “excess deaths” directly and indirectly attributable to COVID-19 reached 15 million by the end of 2021. More than four years of progressin alleviating poverty have been wiped out, pushing 93 million more people worldwide into extreme poverty in 2020. An estimated 147 million children also missed more than half of their in-person instruction over the past two years. The pandemic also severely disrupted essential health services, derailing hard-won progress on SDG 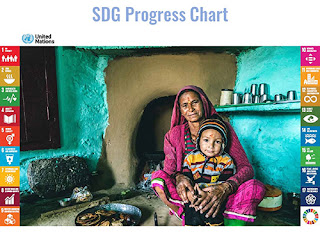 Meanwhile, the world is on the verge of a climate catastrophe where billions of people are already feeling the consequences. Energy-related CO2 emissions for 2021 rose by 6 per cent, reaching their highest level ever and completely wiping out pandemic-related declines. To avoid the worst effects of climate change, as set out in the Paris Agreement, global greenhouse gas emissions will need to peak before 2025 and then decline by 43 per cent by 2030, falling to net zero by 2050. Instead, under current voluntary national commitments to climate action, greenhouse gas emissions will rise by nearly 14 per cent over the next decade.

The war in Ukraine is creating one of the largest refugee crises of modern time. As of May 2022, over 100 million people have been forcibly displaced from their homes. The crisis has caused food, fuel and fertilizer prices to skyrocket, further disrupted supply chains and global trade, roiled financial markets, and threatened global food security and aid flows. Projected global economic growth for 2022 was cut by 0.9 percentage point, due to the war in Ukraine and potential new waves of the pandemic.

The world’s most vulnerable countries and population groups are disproportionately impacted. Women  have suffered a greater share of job losses combined with increased care work at home. Some evidence suggests that violence against women has been exacerbated by the pandemic.

Young people continue to have higher unemployment rates than before the pandemic, and child labour and child marriage are on the rise. Least developed countries struggle with weak economic growth, rising inflation, major supply-chain disruptions, policy uncertainties, and unsustainable debt.

A ROADMAP OUT OF CRISIS 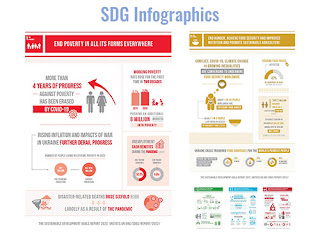 Today, we are on the verge of a critical juncture. Either we fail to deliver on our commitments to assist the world's most vulnerable, or we step up our efforts to rescue the SDGs and deliver meaningful progress for people and planet by 2030.

“The road map laid out in the Sustainable Development Goals is clear,” stated Mr. Liu Zhenmin, United Nations Under-Secretary-General for Economic and Social Affairs. “Just as the impact of crises is compounded when they are linked, so are solutions. When we take action to strengthen social protection systems, improve public services and invest in clean energy, for example, we address the root causes of increasing inequality, environmental degradation and climate change.”

The report also emphasizes that to emerge stronger from the crisis and prepare for unknown challenges ahead, funding our data and information infrastructure must be a priority for national governments and the international community.

The Sustainable Development Report 2022 presents data provided by over 200 countries and areas around the world. While this year’s report demonstrates the dire impacts of the current crises on the 17 Goals, it clearly demonstrates that realizing the SDGs is the remedy needed to address our global challenges. To achieve the SDGs demands urgent transformative action and evidence-based approaches at a global scale.