Book launch of Heroes of Environmental Diplomacy - a book that can help you explain to your family what you do :-) 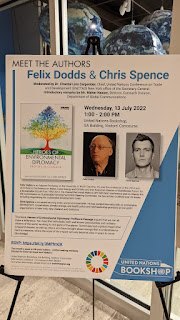 On Wednesday the 13th of July. Heroes of Envirobmental Diplomacy - Profiles in Courage was launched. It can be viewed on facebook here. It can be bought on amazon here.

The event was opened by Mayer Nasser the Director of the Outreach Division in the United Nations Department of Global Communications. It was moderated by Chantal Line Carpentier who currently serves as Chief, United Nations Conference on Trade and Development (UNCTAD) New York office of the Secretary-General.

Here is Felix's comments at the book launch:

I am only one part of the team that put this book together the other part is Chris Spence unfortunately in New Zealand and so couldn’t join us. 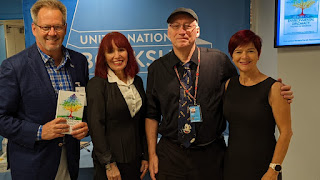 This book is his inspiration and he hassled me to come along for the ride which to begin with I told him I didn’t have time as I was finishing another book ‘Tomorrow’s People and New Technology’ but the idea of Heroes and Profile in Courage was just too delicious an idea not to do.

So what makes a hero?

On our screens and in books it is often their appearance—their clothes and gear—that give them away. Some slip on shiny, skin-hugging lycra as they take to the skies, on their way to defeat the supervillain and save the day.

Others carry wands or swords, or sonic screwdrivers.

Real-life heroes are just like you and me. They rely on ordinary, everyday skills—intelligence, persistence, persuasion, even humour—to achieve the extraordinary results.

And yet, their task is no less important than their fictional peers. Even without superpowers, many real-life heroes are doing their utmost to save the planet.

This book is about environmental heroes. It tells the stories—some for the first time—of people who have played a global role in taking on an environmental challenge that is larger than their organization or their country. In so doing, they have helped improve our world. 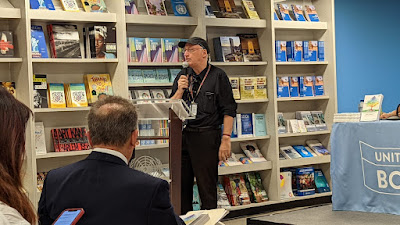 Updating this for the modern era, our book goes beyond national borders and takes a global perspective.

Each chapter tells the story of an individual who has played a significant role in securing global agreement or landmark treaty on a major environmental threat.

We scratch beneath the surface to figure out what kind of person each hero was. What were they like?

How did they beat the odds and achieve some sort of success?

And what is their legacy today?

Interestingly, we uncover a range of characteristics and attributes. No two were the same.

Some of our heroes were humble, while others were larger-than-life figures.

Some were excellent listeners, while others were consummate talkers.

Some were ferocious in their single-minded will to succeed, taking no prisoners along the way, while others forged friendships and alliances.

All were persistent, refusing to give up even when their situation seemed hopeless.

Every one of them recognized that international diplomacy—and persuading the world’s governments to take an issue seriously—was the only way to address an environmental challenge that is global in nature. 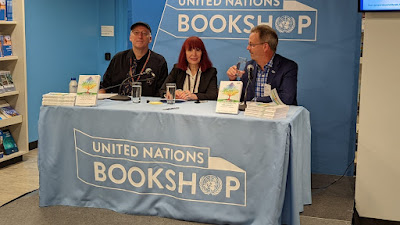 From saving the whales to protecting our ozone layer, from championing a more sustainable way of life to combating climate change, these heroes were determined to make a difference.

Each has a unique, fascinating and, at times, even shocking life story.

Heroes of Environmental Diplomacy: Profiles in Courage tackles a different topic—and a different hero—in each chapter.

In each story, we review the political and environmental situation the world was facing at the time.

We provide insights on each hero’s character and motivations, explain how they helped bring the issue to an international audience, and reveal how the situation was resolved.

Why did we write this book?

First, we want to show the impact individuals with courage can play in bringing about global change.

Each person featured in the book has advanced an international response to a pressing environmental challenge—in the shape of a global treaty or agreement—that has changed the world for the better.

Often, they achieved this in spite of daunting hurdles and obstacles.

Secondly, we hope these stories will serve as an inspiration for the next generation of leaders as our global community seeks to face down the latest—and largest—wave of environmental crises in the 2020s and beyond.

Finally, we want to show that international engagement—diplomacy and negotiations—actually works.

Yes, the world is beset with difficulties. But the only way we can deal with global threats is by coming together as a community at a planetary level. Many problems we face today, from climate change to biodiversity loss, are too big for one single country to deal with alone.

We can only do this by working together.

My hero was Maurice Strong the father of sustainable development secretary general of both the 1972 Stockholm Conference and the 1992 Rio Earth Summit and the first Executive Director of UNEP.

A man who grew up in the Great Depression, dropped out of school at 14.

His father never got another full time job after the depression hit.

Maurice modified the date on his birth certificate from 1929 to 1924 to fight in the second world war, he hitched rides on freight trains to Vancouver – then was a stowaway on a merchant ship that was under contract to the US Army to transport troops to Alaska – ended up working as a dishwasher on the ship.

Two years later working for the Hudson Bay Company which brought him in contact with the Inuit and his lifetime support for the causes of indigenous peoples.

He interned in the UN Pass Office and realised with his lack of education he would need to come back to the UN in a different way than just progressing through the ranks.

He was disappointed in the implementation of the conference outcomes and this chapter focuses on what he did about that when he became the secretary general of the Rio 1992 Earth Summit twenty years later.

He had recognised that governments alone would not deliver global agreements that he would need the support of other key stakeholders and identify over the process of the preparatory meetings for the Earth Summit nine stakeholder groups.

He knew that industry, trade unions and local government would be added as major implementors, 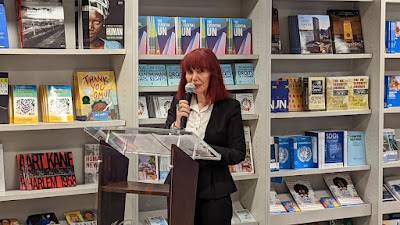 That there was a need for women to ensure a gender perspective and that the next generation would also need their space,

That all the key environmental processes need to be built on science, that food with a growing population would need the involvement of farmers.

That Indigenous Peoples so often forgotten by politicians needed a space for their voices and their knowledge to be heard and finally that NGOs who would monitor and help put pressure on governments to deliver what they promised needed to be at the table and as important many NGOs were implementation agents for governments decisions.

Underlying this approach was his theory of change

“that involving stakeholders in the decision making process will make better informed decisions and that those stakeholders then will be more likely to individually or in partnership help implement those decisions”.

The development and implementation of the SDGs is the best example of that theory of change. When researching this chapter nearly everyone I spoke with didn’t appreciate at the time what and why Maurice was doing this.

“If the world succeeds in making the transition to truly sustainable development, all of us will owe no small debt of gratitude to Maurice Strong.”

The book is in four sections:

Finally, we end the book by reflecting on our heroes’ profiles.

What can we learn from them? What characteristics did they all share? What, collectively, did they achieve? And could they have done it all on their own, or were they all really part of a wider circle of friends and allies?  -

Maybe one or two of you here today and online will be a heros of tomorrow – as we try and secure a more sustainable, just and equitable future for all.

here are many other treaties and processes we could have included but did not, for a variety of reasons.

In many cases, we did not feel the story was ready to tell, either because we believe more progress is needed or the timing just isn’t quite right.

They may form the basis of a second book sometime in the future.

As for the people we featured, we want to emphasize that success is never down to one person.

Every story featured in this book required many people to bring it about. It is always a collective, team effort, even if individual roles are highlighted here.

Then there are many politicians from all stripes who have made a difference, not to mention scientists, diplomats and stakeholder activists.

For those who fully deserve to be featured in the pages of such a book as this, we apologize that we could feature only a small number of the many heroes of environmental diplomacy.

Perhaps a future book might tell more of these stories?

We know this book is a product of its time.

With stories ranging from the 1960s through to the 2020s, it may not be a surprise that most of the chapters—seven of the ten—are about men.

We believe—and firmly hope—that were this book to be updated in 5 or 10 or even 20 years, more of the heroes would be women.

Indeed, it is interesting to note that, of the four stories set after 2010, three of our four heroes are women.

We hope you will buy a copy today and many more copies fin the future for your families and friends who don’t understand what you do at these meetings.  This book we hope will go a little way to help you explain it.

Id like to thank the UN bookshop staff who have made this possible Mayer and Chantal line for introducing and moderating our session and Chris Spence for the vision of this book and the authors who have contributed to telling the amazing stories of how environmental diplomacy works and how to recognise some of our heroes. And for all of you who came out during a busy HLPF.