Guest blog: Are we preparing the funeral of UNEP? 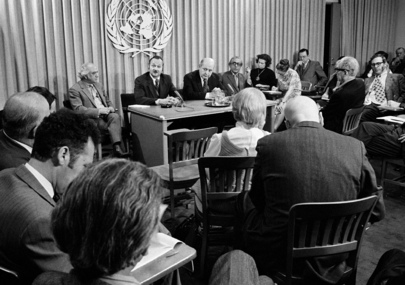 Guest blog by Leida Rijnhout, associate Stakeholder Forum, facilitator of the Major Groups inputs into this process since 2017.
Next week we will celebrate UNEP’s 50 anniversary. Two days of special sessions with dialogues and exchange of ideas on where to go with UNEP for the next decades, will be held on Thursday 3 and Friday 4 of March. While member states are getting ready for a big party, at the same time, the same member states are preparing the funeral for UNEP when negotiating the political declaration for the UNEP@50 event.

As you may know it was already in 2019 when the UNGA adopted a resolution called 73/333, which the main objective to present “a political declaration on a high-level meeting with a view to strengthening the implementation of international environmental law and international environmental governance, in line with paragraph 88 of the outcome document of the United Nations Conference on Sustainable Development, entitled ‘The future we want’”.

Three consultation meetings were held, and during the Covid-years several informal webinars were organised to exchange knowledge and innovative ideas. In the meantime, the OECPR decided that this political declaration should be the outcome document for the UNEP@50 special session. This was a positive sign, as it became not only a high-level declaration as we have so many and stocked somewhere at the shelves for the interested historians. The outcome document for Res73/333 transformed herewith in a more important document: a ministerial outcome document, where ministers put their signature on, focussing on the future of UNEP.

Many civil society organisations are following the negotiations from the very beginning - it started already in 2017 with Res 72/277 on the Global Pact for the Environment. Many member states were at that time quite reluctant in accepting “a pact” as it sounded too strong. Other countries were reluctant because it was an idea from France - being the Global North. For Europe is became sensitive as President Macron was considered to act like as a lonely rider idea without having consulted the other member states of the EU first. Childish arguments, but that is how the world of diplomacy often functions. So the initiative has a kind of false start.

Time went on, the co-chairs from both Res 72/277 and 73/333 did their best to stress the importance of strengthening environmental governance and law during the consultations. It is of course very clear that even if we have the most ambitious treaties, MEAs, conventions, regulations, they will only achieve their goals if we have a proper implementation and enforcement on the national and regional levels. Good and strong environmental governance and environmental rule of law is absolutely key for having any result on all topics agreed upon. Without that, all international agreements will remain dead letter. And without that, UNEP will be an empty box.

With the upgrade from UNEP towards UNEA, all member states can now fully engage with the “highest-level decision-making body on the environment”. Having international decision-making means implementation at the national levels, and that is for some countries of course the problem. Some countries are absolutely not interested in having strong environmental governance and rule of law in their countries. They are also not happy with instruments that civil society groups can use for holding them accountable for what they are (not) doing. Some countries even prefer to put environmental defenders in jail or just kill them. With the argument that they “block development”. Just like some countries say that environmental policies will undermine economic development. The political climate seems to be very bad for taking steps forward.

Nowadays it is globally agreed that the environmental challenges are the biggest ones, like climate change, biodiversity and numerous types of pollution. Combatting those issues requires without any doubt a stronger governance and enforcement of (existing) environmental law.

The draft political declaration (23 Febr) for UNEP@50 is not showing any sense of urgency, nor has it anything new or innovative, it is nothing more than a list of already for many years agreed text. What should be included is the recent decision of the Human Right Council to acknowledge the right to a safe, healthy and sustainable environment as a Human Right. But this paragraph is strangely enough still not agreed. Some member states are opposing to this. The UNEP@50 outcome should be applauding such a decision, and use it for further strengthening their future work. Some countries also don’t want a reference to ‘the environmental rule of law’. even if it is already decided in a resolution of the Governing Council 2013 of UNEP, and is mentioned in the resolution 73/333 itself!

This is not the birthday present you want to have when you turn 50: a newly wrapped old magazine. If UNEP and the member states are really taking UNEP seriously, if they are convinced that the environmental challenges are the biggest for present and future generations, they should agree on a more ambitious mandate for UNEP. Without rule of law, UNEP will become a talk shop, there is no need of having years of negotiations on climate change, biodiversity, plastic pollution, if the agreements on goals and targets are not implemented at the national levels.

So the question is: are we preparing the funeral of UNEP??