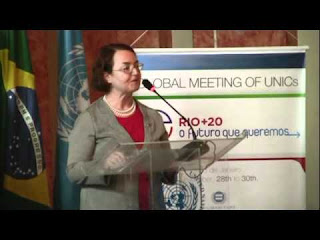 For over thirty years, as I have worked for the UN on major sustainable development and climate summits, I have watched as most, like the Glasgow COP, result in government and business pledges that are a step in the right direction, but nowhere near what is needed. And probably like many of you, I have asked myself, what will it take for change to actually happen on the scale and timeline required? Is there any hope?

As climate change and broken ecosystems are now causing massive suffering and devastation, and we collectively become more desperate for answers, it seems that more and more people are open to a deeper approach – that we need to change not only our policies, but also ourselves.

We hear variations on this message from voices around the globe. Pope Francis calls on us to “hear the cry of the earth, and of the poor”, and to reflect on the interdependence of all creatures. Thich Nhat Hanh urges greater mindfulness and love for the earth as the foundation for action. The Dalai Lama attributes the over-exploitation of our natural resources to ignorance, greed and a lack of respect for life on earth, calling for a “revolution of compassion”.  Jane Goodall speaks tirelessly about the power of hope and the heart, and, even as she urges each of us to action, also makes the point that change comes from within. 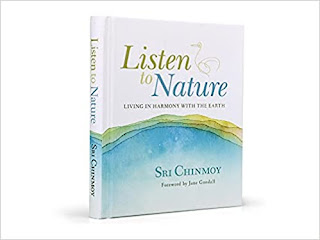 To these wise words, I would like to add the voice of Sri Chinmoy, with whom I had the opportunity to study Indian spirituality. From 1970 until his passing in 2007, he led twice-weekly peace meditations at the UN, begun at the invitation of Secretary-General U Thant, and from time to time he would also respond to questions on the environment, among other topics. I recently edited a new collection of his writings and talks, Listen to Nature – Living in Harmony with the Earth. His approach shares some commonalities with teachers from other traditions, and he also brings his own insights.

Beneath the surface of the political blame game, Sri Chinmoy felt that essentially the environmental crisis is rooted in the dominance of our “division-mind”, which inherently breaks reality into pieces, judges and separates us from Nature and each other. This can only be truly remedied by cultivating our “oneness-heart” -- seeing with “the eye of the heart”, as the Lakota and other traditions call it. 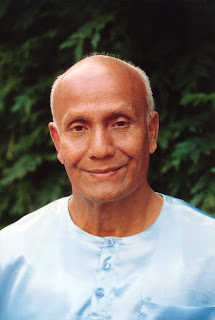 Our “ruthless exploitation” of the natural world arises from the drive for power and greed, Sri Chinmoy says. “Because we are afraid someone will come and attack us, we use all our money and energy to make ourselves powerful… we cut Mother Nature into pieces and take her resources.”  His conclusion sets a high bar: “It is only when we no longer see others as enemies that we shall be able to keep Mother Nature intact.”

Natural disasters can be seen as moments when Mother Earth unleashes her power and fury, but Sri Chinmoy feels that her aim is not to destroy humanity, only to teach us. “We human beings have been doing many, many things wrong over the years,” he says in a warning that seems tailor-made for this era of Covid and climate disasters. “Mother Nature is illumining us in a very special way. She is saying, ‘Now wake up, wake up!’”

Like some other spiritual figures who have spoken out on this issue, Sri Chinmoy urges us to be hopeful, a crucial message at a time when many young people struggle with despair for their future. When he was asked just prior to the 1992 Earth Summit whether the earth could recover from the environmental damage that was already devastating, he was emphatically optimistic about the capacity of Nature to heal itself if we stop our destructive actions. Even faced with the death of forests or coral reefs, he said, “We must not underestimate the power of spirituality… He who created this earth can once again create a new creation on the strength of our prayers and meditations.”

Although catastrophe often seems inevitable from the latest climate news, on the strength of his inner illumination Sri Chinmoy foresees a more positive future: “We are all God’s creation. He will not allow His creation to be destroyed – never, never! For years we have been going through a very dark period. Sometimes we know that when the night is the thickest, then the bright dawn appears. Right now the world situation is most deplorable. But this is not going to last for good… I feel that very soon – I am not saying tomorrow, or in a month or year or two, but in the near future – a new light will dawn, and it will clear all the thick clouds that have gathered for years.”

At the same time, we are called to action. In Sri Chinmoy’s words, “Every self-giving effort of every human being is needed to change the fate of this world.” How will the needed changes take place?  The progression that he envisages is this: “Each individual has a special role to play in the protection of our small planet. It is the illumination of the individual mind and spirit that will precede the awakening of a new collective awareness. The change in individual attitudes will be the precursor of a change in institutional policies, and the result will be a greater respect and love for our planet Earth.”

This may sound simplistic to those immersed in the worlds of policy, politics and protest – and that includes myself, when I am absorbed in my UN work. But in moments of inner silence and clarity, and from many small lessons in seeing how positive change does happen, I do feel deeply that Sri Chinmoy’s words ring true. Jane Goodall sometimes tells the story about a CEO in Singapore who said the tipping point in his decision to green his company’s operations was his 10-year-old daughter coming home from school and asking, “Is it true, Daddy, are you hurting the planet?”  It is just one tiny example of how, when their hearts are touched and attitudes illumined, leaders make better policy decisions.

The spiritual dimension of healing the planet is increasingly recognized by leaders from so many traditions and faiths.  Somehow, we need to move beyond our narrow self-interest. I hope Sri Chinmoy’s voice will be a contribution to this growing awareness. In the words of Dr. Goodall, in her foreword to Listen to Nature, “Sri Chinmoy stresses the need for a deep spiritual connection with the natural world of which we are a part and on which we depend… Let us heed the words of this spiritual teacher before it is too late.” It is important to have a sense of urgency for the massive transformation needed, but also the firm hope that it can and will be done.

Pragati Pascale has worked as a communications strategist and spokesperson on sustainable development issues for the UN for over 30 years. This article reflects her personal views. Listen to Nature: Living in Harmony with the Earth is available from Amazon and Heart-Light Publications in N. America, Blue Beyond Books in the UK,  and Golden Shore Verlag in the EU.