New Book: They Knew the Us Federal Governments Fifty-Year Role In Causing The Climate Crisis By JAMES GUSTAVE SPETH 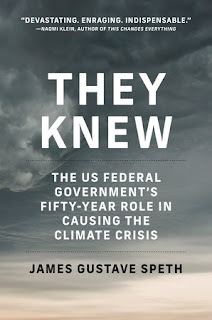 A devastating, play-by-play account of the federal government’s leading role in bringing about today’s climate crisis

In 2015, a group of twenty-one young people sued the federal government for violating their constitutional rights by promoting the climate catastrophe, depriving them of life, liberty, and property without due process of law. They Knew offers evidence for their claims, presenting a devastating, play-by-play account of the federal government’s role in bringing about today’s climate crisis. James Speth, tapped by the plaintiffs as an expert on climate, documents how administrations from Carter to Trump–despite having information about climate change and the connection to fossil fuels–continued aggressive support of a fossil fuel based energy system.

Since Juliana v. United States was filed, the federal government has repeatedly delayed the case. Yet even in legal limbo, it has helped inspire a generation of youthful climate activists.

Please consider ordering a copy from your favorite bookstore and sharing the word with others who may be interested. My publisher has also provided a discount code that will give you 20% discount and free shipping* on direct orders with Penguin Random House.

All royalties go to Our Children’s Trust.

"I am grateful that Julia Olson and Philip Gregory, legal counsel for the seminal case Juliana v. United States, have contributed an introduction to the book. And thankful also for terrific early reviews and endorsements from Naomi Klein, Bill McKibben, Van Jones, Elizabeth Kolbert, and Catherine Flowers. There have been positive reviews also from Nature and Science. See below:"

“A rousing condemnation of a system bent on short-term gain against long-term health.”

“Drawing on first-hand knowledge from his time as chair of the US Council on Environmental Quality during the administration of president Jimmy Carter (1977–81), and his founding role in several major environmental non-governmental organizations, Speth gives a clear and concise account of the scientific evidence available to successive US presidents and Congresses over five decades. He provides a chilling description of the gulf between the safer course of action recommended by scientists and advisers, and the reality of federal policy.”

“Working pro bono [for Juliana v. United States], Speth produced a lengthy report tracing nearly 60 years of federal action on climate change and fossil fuel development. That report is the foundation for this book. Parts of the story have been told before… but Speth’s volume covers a broader period of time, says more about federal encouragement of fossil fuels, and as befits a legal filing, is richly documented.”