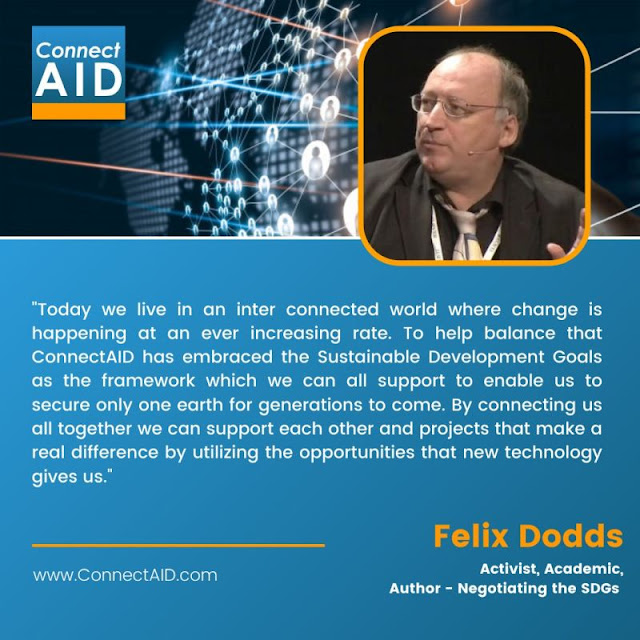 Felix Dodds: You have participated in the conceptualization of the SDGs, could you please explain to us how the SDGs came about and in what way are they different from the MDGs?

I was attending the informal for Rio+20 in July 2011 on institutional framework for sustainable development in Solo Indonesia when the Sustainable Development Goals (SDGs) were proposed by Paula Caballero who was then Director of Economic, Social and Environmental Affairs at the Ministry of Foreign Affairs in Colombia. It was Colombia who played the critical leadership role initially supported by Guatemala and Peru. The SDGs from the beginning differed from the Millennium Development Goals (MDGs) in several critical ways:

Another difference was that the MDGs were not negotiated and were originally opposed by NGOs and other stakeholders because they were had not been involved and because they reduced the outcomes from the conference outcomes of the 1990s to 8 goals and 21 targets.

The SDGs were the most participatory process that we have ever seen. I chaired the UN Conference Sustainable Societies ResponsiveCitizens two months after the Solo workshop, and we re-organized the conference declaration to include a set of indicative SDGs we also came up four years before the SDGs were agreed with 17 goals. Because this was a UN Conference the suggested goals were then put into the policy briefs of the Rio+20 conference.

At the same time as Colombia were proposing the idea of the SDGs Paul Ladd of UNDP in May 2011 had prepared a paper for I think the UN Development Group under Helen with a similar idea.

Initially it wasn’t supported by the development NGO and the development ministries. In fact at the Colombia retreat in November 2011 the development agencies attending it were focused on renewing the MDGs were a few changes on the margin…AUSAID suggested maybe an additional target and a few additional indicators on the environment might be the way forward. I think Save the Children opposition to the SDGs continued through to the end of the negotiations in 2014.

My work from July 2011 to Rio+20 was to support Colombia and to promote the suggested goals from the Sustainable Societies Responsive Citizens conference. That it was the NGOs and other stakeholders who put the first set of indicative SDGs forward is important as it laid the foundation for a huge impact in the process for stakeholders. My work after Rio+20 was focused on setting up a coalition for what would be SDG 11 on Sustainable Cities and Communities. The Communitas coalition played a critical role behind the scenes working with member states on building support for the goal and in facilitating discussion on possible targets. Finally, an additional difference between he SDGs and the MDGs was the interlinkage between goals and targets. This built on the work started by the German government at their Nexus Conference on Water-Food-Energy and the Green Economy in 2011 which I was the board of and managed the engagement of stakeholders with. I followed this with a second Nexus Conference in March 2014 in Chapel Hill at University of North Carolina which I codirected and which a section of the key SDG negotiators attended which helped the interlinkage targets on food and water emerge.

Felix Dodds: How did COVID19 change the way we communicate and what is your vision of how the world will evolve after covid?

I think for many people COVID has made us more internet savvy whether its using Hopin, Zoom or Virbela where you appear as an avatar in a virtual conference space. This isn’t universal and we have seen the limits of this for negotiations.

For the UNFCCC informals this last three weeks Egypt with UNDP created a high level space in  Sharm El Sheikh for key African negotiators could coordinate and engage in person with the virtual setting. Its clear to me over the last eighteen months that the virtual setting has added the ability of people from around the word to attend intergovernmental meetings particularly those that are not negotiating like the High Political Forum or World Water Week and this is good news for increasing knowledge and sharing best practice what its not good for is negotiating difficult issues and for the participation of stakeholders to enable them to influence policy changes. So great for sharing bad for negotiating.

Felix Dodds: During the COVID crisis,  how we can counter misinformation and influence others as an international collective to take action for the SDGs?

This is not new and you will find in some of the developed countries new NGOs such as in the UK the Energy and Climate Intelligence Unit that supports informed debate on energy and climate change issues in the UK. Addressing misinformation and supporting journalists, parliamentarians and other communicators with accurate and accessible briefings on key climate and energy issues. We may need similar national organizations set up on the SDGs

Felix Dodds: What interesting online communities have popped up in regards to the SDGs?

A new space Clubhouse has emerged is an invitation-only social media app where users can communicate in voice chat rooms that accommodate groups of thousands of people. The audio-only app hosts live discussions, with opportunities to participate through speaking and listening. It started for celebrities but has widened out and has some interesting groups which discuss issues with a wide range of people. The SDGs are mostly dealt with in the UN Clubhouse but with the announcement of the Glasgow Finance Alliance for New Zero it is now being addressed in spaces for the finance sector.

I think the HLPF being virtual has increased the outreach and understanding of the SDGs. We have seen academic conferences that focus on the SDGs such as Future Earth enable researchers to participate and learn in a way they couldn’t before. One great example is also the Virtual Island Summit in September which brings together  stakeholders from islands around the world many who would never have had the chance to meet together.  So this has grown existing communities as opposed to new online communities.

Felix Dodds:  Do you think the COVID will be a waking up call for more solidarity?

It is making it more obviously the inequality in countries and between developed and developing countries.  I am hopeful that that will build stronger solidarity in our communities online and in person. But only time will tell. Building stronger online communities in support of the SDGs should be what we are working for and ConnectAID can play a critical role.

Felix Dodds: As the world is changing, how can we prepare to build forward better? 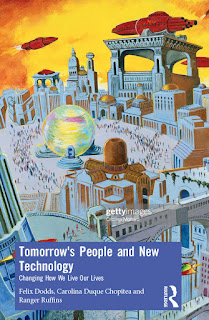 I have just handed in a new book Tomorrow’s People and New Technology: Changing How We Live Our Lives written with Carolina Chopitea and Ranger Ruffins. The book provides an indication of what the world might look like in 2030,  it looks at the nexus between emerging technologies and sustainable development, politics and society, and global governance.

We are witness a series of social, political, cultural, and economic changes/disruptions this book examines the Fourth Industrial Revolution and the way emerging technologies are impacting our lives and changing society.

The Fourth Industrial Revolution is characterized by the emergence of new technologies that are blurring the boundaries between the physical, the digital, and the biological worlds.

The book allows readers to explore how these technologies will impact peoples’ lives by 2030.

It helps readers to not only better understand the use and implications of emerging technologies, but also to imagine how their individual life will be shaped by them.

The book provides an opportunity to see the great potential but also the threats and challenges presented by the emerging technologies of the Fourth Industrial Revolution, posing questions for the reader to think about what future they want. Emerging technologies, such as robotics, artificial intelligence, Big Data and analytics, cloud computing, nanotechnology, biotechnology, the Internet of Things, fifth-generation wireless technologies (5G), and fully autonomous vehicles, among others, will have a significant impact on every aspect of our lives, as such this book looks at their potential impact in the entire spectrum of daily life, including home life, travel, education and work, health, entertainment and social life.

The new goals agreed in 2030 will probably be for 2050 and will need to address some of this.